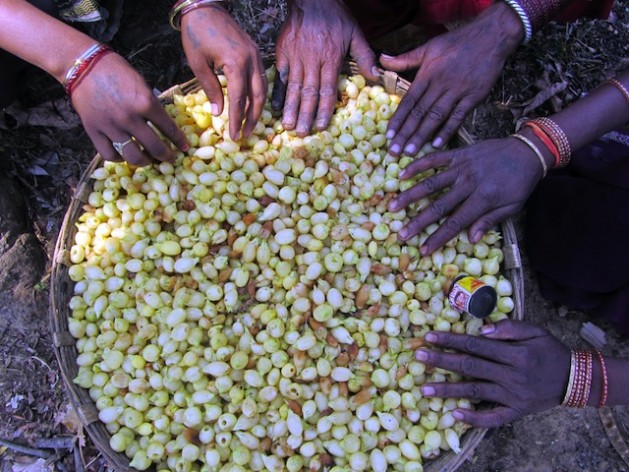 Tribal women handle flowers from the Mahua tree, indigenous to central India. India was one of the first countries to ratify the Nagoya Protocol. Credit: Stella Paul/IPS

Once every six months, a group of traders from China arrive at Pun’s house and buys several kilos of the herb. In return, Pun gets “a lump sum of 5,000 to 6,000 Nepalese rupees [about 50 dollars],” he tells IPS.

But ask Pun who these traders are and what they plan to do with bulk quantities of Paris polyphylla, listed as a vulnerable species by the International Union for the Conservation of Nature (IUCN), and he stares blankly.

“This is a medicinal herb, so I assume they use it to make medicines,” is his only explanation.

“The Nagoya Protocol is a huge opportunity that can help [states] bring down the cost of biological conservation." -- CBD Executive Secretary Braulio Ferreira de Souza
In fact, trade in Paris polyphylla has been banned since it falls under the Annapurna Conservation Area, the largest protected area in Nepal covering over 7,600 square kilometres in the Annapurna range of the Himalayas.

From ancient times local communities have utilised the herb to cure a range of ills, but traders like those who come knocking at Pun’s door are either unaware or unconcerned that Paris polyphylla represents centuries of indigenous knowledge, and is thus protected under a little-known international treaty called the Nagoya Protocol.

Adopted in 2010 at the 10th meeting of the Conference of the Parties to the United Nations Convention on Biological Diversity (COP 10) in Japan, the agreement “provides a transparent legal framework for […] the fair and equitable sharing of benefits arising out of the utilization of genetic resources.”

Designed to prevent exploitation of people like Pun by traders who buy traditional medicinal resources for a paltry sum before turning huge profits from the sale of cosmetics or medicines derived from these species, the treaty covers all genetic resources including plants, herbs, animals and microorganisms.

Impressive in its scope, the protocol has hitherto largely been confined to paper. This year, however, at the recently concluded COP 12, which ran from Oct. 6-17 in Pyeongchang, South Korea, scores of experts agreed to put the provisions of the treaty front and center in efforts to preserve biological diversity worldwide.

With support from 54 countries – four more than the mandatory 50 ratifications required to bring the treaty into effect – the Nagoya Protocol will now form a crucial component of the post-2015 development agenda, as the world charts a more sustainable path forward for humanity and the planet.

According to environmentalists and scientists, the Nagoya Protocol could help curb ‘biopiracy’, broadly defined as the misappropriation of traditional or indigenous knowledge through the system of international patents that primarily benefit large multinationals in developed countries.

For instance, a pharmaceutical company that develops and sells herbal-based medicines will now – under the terms of the protocol – be required to share a portion of its profits with the country from which the resources, or the traditional knowledge governing the resources, originate.

In turn, these earnings are expected to help low-income countries finance conservation efforts.

A clause on access also provides mechanisms for local communities or countries to limit or restrict the use or extraction of a particular resource.

These clauses guard against biopiracy of the kind that was witnessed in the 1870s when the British explorer Henry Wickham smuggled 70,000 rubber tree seeds from Brazil, which were subsequently dispatched as seedlings to plantations across South and Southeast Asia, thus breaking the Brazilian monopoly over the rubber trade.

Nearly a century later, in the 1970s, Brazil again fell victim to biopiracy when the U.S.-based pharmaceutical giant Squibb used venom from the fangs of the jararaca, a pit viper endemic to Brazil, in the creation of captopril, a medication used to treat hypertension.

The New York Times reported that the drug earned the company revenues of 1.6 billion dollars in 1991, but Brazil itself did not see a cent of these profits.

The potential success of the treaty hangs on the support it receives in the international arena. So far, two-thirds of the parties to the Convention on Biological Diversity (CBD) have failed to ratify the protocol, representing what some have referred to as a “missed opportunity”.

“The Nagoya Protocol is a huge opportunity that can help the parties bring down the cost of biological conservation,” CBD Executive Secretary Braulio Ferreira de Souza told IPS, adding, however, that nothing will be possible until nations make the agreement legally binding.

Brazil, home to the world’s largest rainforest that is considered a mine of genetic resources, is yet to throw its weight behind the Nagoya agreement, a move experts say would benefit over three million indigenous people living in the Brazilian Amazon.

Roberto Cavalcanti, secretary for biodiversity in the Brazilian environment ministry, informed IPS that President Dilma Rousseff has submitted the legislation under an urgency provision, so it’s now in the top three pieces of legislation pending approval by Congress.

“We anticipate that with the approval of Brazil’s new domestic Access and Benefits Sharing (ABS) legislation, there will be a good environment for the ratification of the Protocol,” he added.

The government has already begun the task of informing local communities about the merits of the Nagoya Protocol and its economic benefits for generations to come.

The work is being done in collaboration with the environmental conservation organisation Grupo de Trabalho Amazonico, which is helping to educate communities around the country.

Since January this year, the organisation has helped over 10,000 locals put together a set of rules called Protocolo Communitaro (Community Protocols), which promotes preservation and sustainable use of forests and water sources, including medicinal plants and fish.

Unlike Brazil, several other countries are struggling to pave the way for ratification of the Protocol, largely due to a lack of technical and economic capacity.

This past June, the CBD organised a workshop in Uganda where several African states could learn more about the treaty and its ABS mechanism.

Countries like the Democratic Republic of the Congo (DRC), home to a huge reserve of genetic resources and biological diversity including the world’s second largest rainforest, attended the workshop and admitted to being constrained by financial and technical limitations in implementing international agreements.

However, Ishii added, demand for the support has to come from within.

“Every country has a different degree of capacity. People come to us with a plan to build a particular skill in a particular area and there are of course specific programs for that.

“But I would encourage them to look at the entire strategy as one big capacity building investment [and] use that money wisely, to better manage their protected area systems [and] their administrative structures,” she concluded.