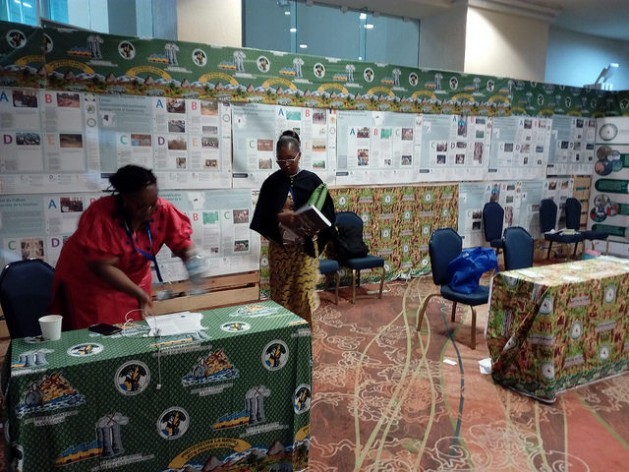 In the United Nations Conference on Biodiversity, government delegates, representatives of international organisations, and civil society activists came from every continent to Cancún in southeast Mexico, to make their proposals to protect biological resources. Credit: Emilio Godoy/IPS

CANCUN, Mexico, Dec 14 2016 (IPS) - Synthetic biology, geoengineering and the recognition of ancestral knowledge are the issues that have generated the most heated debate in the United Nations Conference on Biodiversity, which ends in this Mexican resort city on Friday Dec. 17.

The outcome of the debates on these questions will be seen this week, in the final stretch of the Dec. 2-17 13th Conference of the Parties to the Convention on Biological Diversity (CBD), or COP 13, and other meetings and international forums focusing on the planet’s natural resources.

For developing countries these issues are vital, due to the biological and biocultural capital that they concentrate in their territories and that could be undermined if their exploitation is allowed within the framework of the CBD.

“On a scale of one to 10, I would say that we are at four. The negotiations are slow. We need to speed them up and they have to in favour of the people,” Venezuelan Santiago Obispo, leader of the non-governmental Amazon Cooperation Network, told IPS.

With respect to synthetic biology, governments and representatives of academia, civil society and indigenous communities are concerned about the possible devastating impacts on ecosystems and on the livelihood of local communities.

This discipline consists of computer-assisted biological engineering to design and build synthetic life forms, live parts, artifacts and systems which do not exist in nature.

Currently, research is being carried out on the creation of synthetic vanilla flavour, whose industrial production threatens the well-being of farmers in countries like Comoros, China, Madagascar, Mexico, Reunion and Uganda.

Similar research is also being conducted on vetiver, a fragrance used in cosmetic products and whose biosynthetic version will affect Brazil, China, Haiti, Indonesia, Japan, India and Reunion.

Laboratory studies are also focusing on genetic drivers, able to permanently alter species by driving one specific characteristic in the reproductive process.

Through this process, the altered genes are the ones inherited by the offspring. But opponents fear that species or ecosystems will be modified or eliminated, with unpredictable consequences.

In Cancún, where more than 6,500 official delegates and representatives of civil society are taking part in the conference, over 160 non-governmental, academic and indigenous organisations called for a moratorium on experiments involving synthetic biology, like gene drivers.

In the COP 13 debates, the African and Caribbean countries, seconded by El Salvador, Bolivia and Venezuela, pronounced themselves in favor of a moratorium, while Australia, Brazil and Canada led the group lobbying for the acceptance of synthetic biology within the CBD.

One issue which did gain unanimous support from the state parties is the rejection of digital genomic sequencing, molecular structures created with computer programmes.

In the text of the Cancun Declaration which is being negotiated, there is no reference to a “moratorium” on bioengineering and genetic drivers, but it does invite countries to postpone this kind of research.

In previous COPs, which are held every two years, the CBD recommended a precautionary approach with respect to the positive and negative effects of synthetic biology and called for further scientific research. 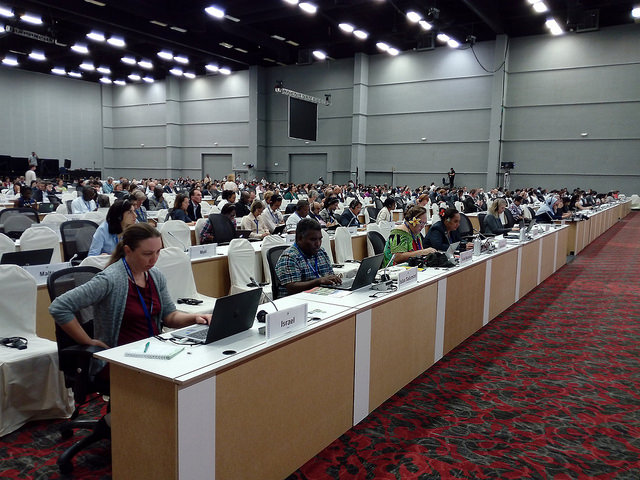 Delegates of the 196 states parties to the Convention on Biological Diversity step up the pace to achieve agreements on conservation and use of the planet’s biodiversity, in a summit that closes on Dec. 17 in Cancún, in Mexico. Credit: Emilio Godoy/IPS

For Barbara Unmüssig, one of the heads of Germany’s Heinrich Böll Foundation, linked to Germany’s Green Party, the Cancún summit will be a success if the CBD adopts a precautionary approach towards bio engineering and geo engineering.

“The COP should come up with a strong declaration to tell companies behind synthetic biology and geoengineering that they take steps towards evaluating them and establishing a moratorium. If it confirms moratoria, it will show that it’s a convention with teeth and that it’s not in favour of certain technologies,” the activist told IPS.

“We have to stop the main drivers behind the destruction of biodiversity. If we are really interested in maintaining ecosystems, we have to think about adequate measures against overexploitation of fisheries and cultivating GMOs. The agroindustry tries to landgrab for monoculture, it’s happening all around the world.”

During COP 9, held in Bonn, Germany in 2008, the CBD adopted a moratorium on ocean fertilisation, a geoengineering technique.

Meanwhile, delegates of native communities have been very active in the Cancún summit defending their rights in their territories and as protectors of biodiversity.

Bolivia suggested the creation of an ad hoc body responsible for indigenous peoples issues, now that native communities have gained recognition from the CBD of the concept of “indigenous peoples and local communities” as subjects of rights, in response to a demand that gained the support of organisations worldwide.

But within this recognition, there is one issue that faces opposition: the demand that native peoples settled in the territories must give consent to policies of conservation and best use of biodiversity. The term “free” in the proposed prior, free and informed consent is blocking negotiations due to opposition led by Asian and African countries.

“We want a balance of perspectives, a serious and responsible balance to increase the participation of indigenous peoples,” Diego Pacheco, the head of Bolivia’s delegation at COP 13 and his country’s vice minister of planning and development, told IPS.

The Cancún conference coincides with the halfway mark of the United Nations Decade on Biodiversity 2011-2020.

Studies published on the occasion of the summit show that ecosystems continue to be destroyed worldwide, despite conservationist efforts.

The world is living up to less than 60 per cent of the Aichi Targets, the 20 points of the Strategic Plan for Biological Diversity 2011-2020, adopted in 2010 by the states parties to the CBD, which refers to the protection of natural resources, participation of indigenous peoples and sustainable use, among others.

“These negotiations will affect biodiversity in the planet. We cannot allow the CBD to try to commercialise biodiversity, to put a price tag on it,” said Obispo, of Venezuela.

Unmüssig recommended addressing the causes of the loss of biological resources.

“We have to stop the main drivers behind the destruction of biodiversity. If we are really interested in sustaining ecosystems, we have to think of adequate measures against the overexploitation of fisheries and the cultivation of GMOs. Agroindustry tries to landgrab for monoculture, it’s happening all around the world.”

For Pacheco, the CBD must not impose “a hegemonic model. It has to listen to alternatives, but there is strong influence from developed countries.”

Topics such as the recognition of natural pollinisers and the designation of protected marine areas have progressed without any major setbacks.

In the first case, the importance of agroecology, of the maintenance of habitats, and of the need to avoid or reduce the use of toxic chemical substances in agriculture was discussed. In the second case, the significance of marine planification was debated.