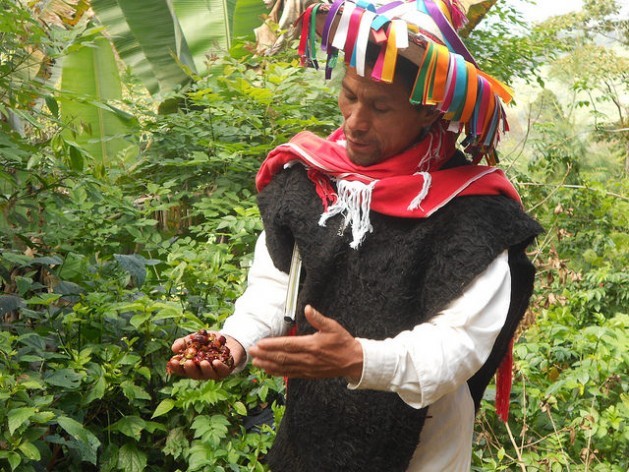 An indigenous peasant farmer holds native coffee grains he grows in the southern Mexican state of Chiapas. The sharing of benefits generated by genetic resources has become a controversial issue throughout Latin America. Credit: Emilio Godoy/IPS

MEXICO CITY, Aug 22 2016 (IPS) - In July 2015, the Mexican government granted a U.S. corporation permission for the use of genetic material obtained in Mexican territory for commercial and non-commercial purposes, in one of the cases that has fuelled concern in Latin America about the profit-oriented approach to biodiversity.

The agreement, which is catalogued with the identifier number Absch-Ircc-Mx-207343-2, was approved by the National Seeds Inspection and Certification Service and benefits the U.S. company Bion2 Inc, about which very little is known.

Prior, informed consent from the organisation or individual who holds right of access to the material was purportedly secured. But the file conceals the identity of this rights-holder and of the genetic material that was obtained, because the information is confidential.

This is an example of confidentiality practices that give rise to concern about the proper enforcement of the Nagoya Protocol on Access to Genetic Resources and the Fair and Equitable Sharing of Benefits Arising from their Utilization, signed in that Japanese city in 2010 and in effect since 2014.

The protocol, a supplementary agreement to the 1992 Convention on Biological Diversity, in force since 1993, seeks to strengthen the conservation and sustainable use of biodiversity and the fair and equitable sharing of benefits arising from the utilisation of genetic resources.

In Latin America and the Caribbean, the protocol has been ratified by Cuba, the Dominican Republic, Guatemala, Guyana, Honduras, Mexico, Panama, Peru and Uruguay.

The protocol stipulates that each party state must adopt measures to ensure access to traditional knowledge associated with genetic resources in the possession of indigenous and local communities.

That will be done, it states, through the prior informed consent and the approval and participation of these groups, and the establishment of mutually agreed conditions.

“The expectations of indigenous people are not well-covered by the protocol,” Lily Rodríguez, a researcher with the Institute for Food and Resource Economics at Germany’s Bonn University, told IPS.

She stressed that the protocol is “the opportunity to recognise traditional knowledge as part of each nation’s heritage and to establish mechanisms to respect their decisions with regard to whether or not they want to share their knowledge.”

Latin America and the Caribbean is the region with the greatest biodiversity in the world, as it is home to several mega-diverse countries like Brazil, Colombia, Ecuador and Mexico.

The questions covered by the Nagoya Protocol will form part of the debate at the 13th meeting of the Conference of the Parties to the Convention on Biological Diversity, to be held December 4-17 in Cancun, Mexico. 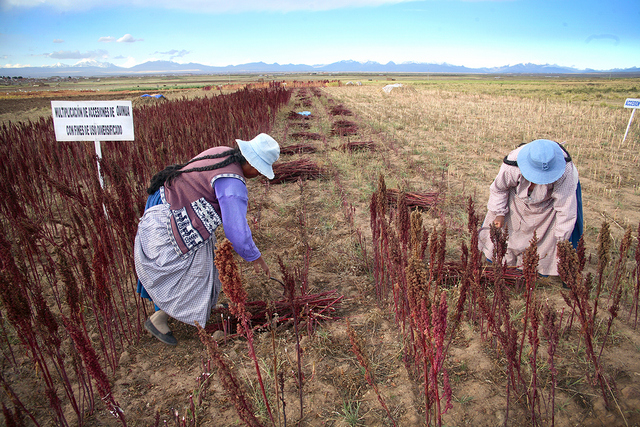 Furthermore, the sharing of eventual monetary and non-monetary benefits for indigenous peoples and communities is based on “mutually agreed terms” reached in contracts with companies and researchers, which can put native people at a disadvantage.

In Guatemala, civil society organisations and indigenous groups have fought their country’s inclusion in the Nagoya Protocol, which it signed in 2014.

In June, a provisional Constitutional Court ruling suspended the protocol in Guatemala.

“We are opposed because it was approved without the necessary number of votes in Congress; indigenous people were not consulted; and it gives permission for experimentation with and the transfer and consumption of transgenics,” said Rolando Lemus, the head of the Guatemalan umbrella group National Network for the Defence of Food Sovereignty.

The activist, whose NGO emerged in 2004 and which groups some 60 local organisations, told IPS, from the Guatemalan department of Chimaltenango, that the use of biodiversity is part of the culture and daily life of indigenous people, whose worldview “does not allow profiting from ancestral know-how.”

Guatemala had accepted three requests for research using the medicinal plant b’aqche’ (Eupatorium semialatum), cedar and mahogany. The request for the first, used against stomach problems like worms, was in the process of being studied, and the other two were approved in October 2015 for research by the private University del Valle of Guatemala.

As a subsidiary to the Biodiversity Convention, the protocol also covers activities carried out since last decade, regulated by national laws, in different countries of Latin America, which are discussed in a regional study published in 2014.

Between 2000 and 2005, Bolivia granted 10 genetic resources access contracts, out of 60 requests filed. Several of them involved quinoa and other Andes highlands crops.

Two of them were for commercial uses. But since new laws were passed in Bolivia in 2010, ecosystems and the processes that sustain them cannot be treated as commodities and cannot become private property. The legislation amounts to a curb on the country’s adherence to the protocol.

In Colombia there are permits to collect samples and to send material abroad. Since 2003, that South American country has granted 90 contracts, out of 199 requests, and has signed a contract for commercial research.

Bioprospecting involves the systematic search for, classification of, and research into new elements in genetic material with economic value. The role of the protocol is to ensure that this does not deprive the original guardians of their knowledge and eventual benefits.

Ecuador has received 19 requests since 2011 and in 2013 it negotiated a commercial contract.

For its part, Mexico has authorised 4,238 permits for scientific collection since 1996, and only a small percentage of requests have been denied.

Peru, meanwhile, requires a contract for every kind of access. Since 2009, it has authorised 10 contracts, out of more than 30 requests, and 180 permits for research into biological resources.

Ecuador is a good example in the region of the plunder of genetic material, as officials in that country complain.

The “First report on biopiracy in Ecuador”, released in June by the Secretariat of Higher Education, Science, Technology and Innovation, stated that Australia, Belgium, France, Germany, Israel, the Netherlands, South Korea, the United Kingdom and the United States have improperly exploited their biological wealth.

Of 128 identified patents, companies from the U.S. hold 35, from Germany 33, from the Netherlands 17, from Australia 15 and the rest are held by firms in a number of countries.

“It all depends on how the governments of each country protect indigenous people, in accordance with their own legal frameworks,” said Rodríguez.

“If the legislation says that they will only negotiate prior consent, including clauses on mutually agreed conditions – if they aren’t in a position to negotiate, it would be good if the government supported them so the negotiations would be more equitable and favourable for native peoples,” she argued.

Lemus is confident that the suspension in Guatemala will remain in place. “We are thinking of other actions to engage in. People must have mechanisms to protect themselves from intellectual property claims and genetic contamination,” he said.