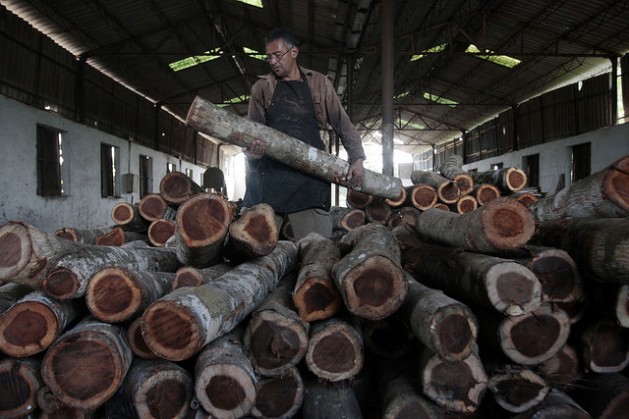 A carpenter organises a load of mahogany seized by authorities in the Ciénaga de Zapata wetlands. Credit: Jorge Luis Baños/IPS

UNITED NATIONS, Jun 9 2014 (IPS) - How much does a forest cost? What’s the true economic value of an ocean? Can you pay for an alpine forest or a glacial meadow? And – more importantly – will such calculus save the planet, or subordinate a rapidly collapsing natural world to market forces?

On the last day of its World Summit of Legislators in Mexico City, the Global Legislators Organisation (or GLOBE International) released a landmark study Sunday on natural capital accounting, the first comprehensive report that compiles legal and policy efforts in 21 countries to calculate the monetary value of natural resources.

Defining ‘natural capital’ as encompassing everything from ecosystems and solar energy to mineral deposits and fossil fuels, the study recognises the highly degrading impact of human activity on the environment and underscores the “urgent need to develop effective methods and measures for natural capital accounting and to embed these within relevant legal and policy frameworks.”

“[T]he currency of life is life, not money.” – Vandana Shiva, director of the Research Foundation on Science, Technology, and Ecology
“The report was conceived very much as a North-South learning partnership,” said lead science author Ben Milligan, a research fellow at the Centre for Law and Environment at the University College London (UCL).

“Equal voice was given to all inputs,” he told IPS, whether they came from the GLOBE International Secretariat or any of the 21 national stakeholders of the featured countries, which include five Asian nations, three European countries, seven African states and six case studies from the Americas.

What the authors found, according to Milligan, was a groundswell of political support for attempts to “recognise the fact that, in addition to nature’s important cultural, spiritual and aesthetic values, it also provides essential goods and services for our well-being and economic existence.”

The purpose of the study, he added, was to “provide a document that supported efforts in these countries to effect positive change.”

Indeed, some of the findings from the report are staggering. In Peru, for instance, where the focus of natural capital accounts is linked to economic valuation, the Ministry of Environment (MINAM) found that “the total value of selected ecosystem services in 2009 amount to 15.3 billion dollars.”

Broken down, this worked out to some 2.5 billion dollars from water and energy, eight billion from agriculture, forestry and livestock and 864 million from fisheries, while natural capital-based exports brought in nine million dollars in 2009.

“The vulnerability of ecosystems is of particular concern as ecosystem services are the productive base for industries such as fisheries, agriculture, manufacturing, tourism and pharmaceuticals,” the report noted, adding that the government already utilises various tools to measure the health of the natural environment, including an annual State of the Environment report produced by the National System for Environmental Information.

According to the GLOBE study, India comprises just 2.4 percent of the planet’s land area but supports seven or eight percent of its animal and plant species. Additionally, it counts itself among the world’s 17 ‘mega-diverse’ countries, boasting three global biodiversity hotspots and a high rate of species endemism.

Referring to the work of Navdanya, an organisation meaning ‘nine seeds’ that grew out of the Research Foundation on Science, Technology and Ecology, Shiva pointed to the many efforts underway in India to conserve the natural world without resorting to the language of money.

Made up of seed savers and organic produces in over 17 states, Navdanya has established 111 community seed banks, trained some 500,000 Indian farmers in sustainable agriculture and created the country’s largest fair trade organic network.

“If the globalised system based on commodities and financialisation shrinks a community’s social and ecological base, Navdanya’s work increases and enhances it,” she told IPS.

Operating around the concept of Earth Democracy, Navdanya offers farmers an alternative to the cash crop system that has led to a wave of suicides unparalleled in human history.

“Earth Democracy means no system can be reduced to a simple function or a ‘good’ to be traded on the global market,” Shiva said.

“It’s like the people who are waking up to the fact that soils absorb carbon, and want to reduce that function to a carbon-trade equation, without realising that soil is not just carbon, it is phosphorous, it is magnesium, it is many other things that cannot be assigned a simple monetary value.”

In the Democratic Republic of the Congo (DRC), where the government is struggling to access standardised data on the economic value of natural capital, this much is known: that an extensive network of lakes and rivers covers 3.5 percent of the country’s total area; that forests cover 60 percent of DRC’s total land area (including over 700 identified species of trees); and that the forestry sector accounts for two percent of the country’s gross domestic product (GDP).

The Central Bank estimates that extractive industries contributed 45 percent of GDP in 2010, with the mining sector alone accounting for nearly 34 percent.

Keeping these statistics in mind, the government is now in the process of strengthening the sector’s legal and regulatory framework, conducting geological and mining research to expand its knowledge repository of the soil and subsoil, and performing environmental assessments of the impact of mining.

While proponents of natural capital accounting argue that the system will inform government behaviour and encourage the sustainable use of resources, some say that calculating ‘natural wealth’ is one step away from the complete commodification of the planet’s bounty.

“Evaluation of nature’s ecological services and functions can cut both ways,” Vandana Shiva, author, environmentalists and founder of the Research Foundation on Science, Technology, and Ecology in India, told IPS.

Understanding the value of stable and healthy ecosystems for local communities is “necessary and good,” she said. “But the minute you take a complex system with multiple functions and reduce it to a single function that can be appropriated and traded, you are already doing it wrong. After all, the currency of life is life, not money.”

Shiva pointed to the People’s Summit that took place alongside high-level negotiations at the 2012 environmental conference in Brazil (dubbed ‘Rio+20’), during which activists, indigenous groups and scientists rejected the idea of a green economy based on the financialisation of ecological services, fearing that such a scheme would ignore the root causes of environmental destruction.

The northern Indian state of Uttarakhand provides a stark example of this debate, since it recently became the first state in India to begin calculating its gross environmental product (GNP).

With its lush valleys and alpine meadows, this Himalayan state is one of the greenest in the country, retaining nearly 60 percent forest cover despite determined efforts to clear the land for development.

According to the GLOBE study, various reports have valued the land here at roughly five to seven billion dollars per annum. In a bid to ease restrictions on development, the Central Government now offers Uttarakhand a ‘green bonus’ of 0.3 billion dollars a year in exchange for its rich land.

Shiva says such a ‘bonus’ simply serves to distract from the more pressing issues of deforestation and glacial melting in Uttarakhand, which led to deadly floods last year. Even the Supreme Court of India has admitted that dams and hydroelectric projects in the state, which is infamous for its destructive development, aggravated the tragic disaster.

What this clearly shows, according to Shiva, is that “valuation is good if it’s giving you a red light to destruction. When valuation turns into a price, however, it [simply] gives the green light to destroy in smarter and cleverer ways.”

Others fear that natural capital accounting will trample upon the rights of indigenous people, many of whom see themselves as the last remaining custodians of the land.

According to Hugo Blanco, leader of the Campesino Confederation of Peru (CCP), tabulating a country’s ‘natural wealth’ will do little to correct the lopsided pyramid of power that places transnational corporations at the top and indigenous people and the environment on the bottom.

“Take, as one example, the Conga Project,” Blanco told IPS, referring to the massive gold and copper mining initiative in the Cajamarca Region of northern Peru that threatens to poison the waters of 40 high-altitude lagoons, which feed some 600 aquifers and provide drinking and irrigation water to thousands of campesinos before passing into five major rivers that eventually empty into the Atlantic and Pacific oceans.

Even worse, Blanco says, is the impending threat of a dam that, if constructed, will flood the territories of hundreds of campesinos in order to provide electricity for the mine.

“This is an insane system,” he asserted, adding that such development projects highlight the Peruvian government’s true allegiance: not to the national laws protecting the rights of indigenous people or the environment, but to multinational corporations.

He believes Peru stands as a perfect example of the flaws inherent in a valuation system that attaches a price tag to nature.

“It would be a great stupidity to sell this richness, no matter how many billions of dollars you get,” Blanco insisted “We can’t sell life.”