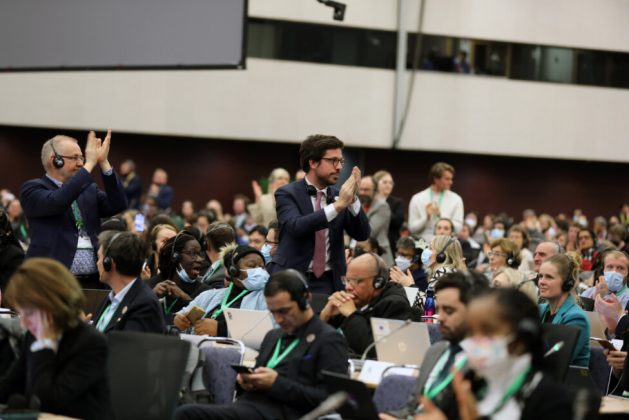 Government delegations celebrate the close of the historic negotiation at COP15 of the New Global Framework on Biodiversity in the early hours of the morning on Monday Dec. 19, at the Palais des Congrès in Montreal, Canada. CREDIT: Mike Muzurakis/IISD

MONTREAL, Dec 19 2022 (IPS) - The pillar coral (Dendrogyra cylindrus), which takes its name from its shape, is found throughout the Caribbean Sea, but its population has declined by more than 80 percent since 1990. As a result, the International Union for Conservation of Nature (IUCN) has listed it as “critically endangered” due to the effects of the human-induced climate crisis.

Its fate now depends on the new Kunming-Montreal Global Framework on Biodiversity, which was agreed by the 15th Conference of the Parties (COP15) to the Convention on Biological Diversity (CBD) on Monday Dec. 19, at the end of the summit held since Dec. 7 at the Palais des Congrès in Montreal.

Now, the world’s countries must translate the results into national biodiversity strategies, to comply with the new accord. In this regard, David Ainsworth, spokesman for the CBD, in force since 1993 and based in Montreal, announced the creation of a global accelerator for the drafting of national plans, with the support of U.N. agencies. 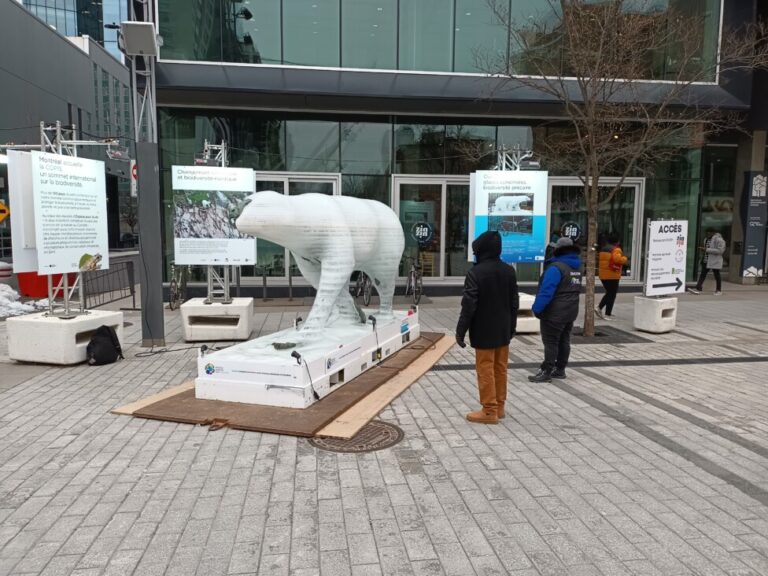 COP15 of the Convention on Biological Diversity approved a new program to protect the world’s natural heritage for the next 10 years during the summit held in the Canadian city of Montreal. The picture shows a statue of a polar bear, whose species is threatened by melting ice and habitat loss, on a street in Montreal. CREDIT: Emilio Godoy/IPS

The menu of agreements

COP15, whose theme was “Ecological Civilization: Building a shared future for all life on earth”, approved four objectives on improving the status of biodiversity, reducing species extinction, fair and appropriate sharing of benefits from access to and use of genetic resources, and means of implementation of the agreement.

In addition, the plenary of the summit, which brought together some 15,000 people representing governments, non-governmental organizations, academia, international bodies and companies, agreed on 23 goals within the Global Framework, for the conservation and management of 30 percent of terrestrial areas and 30 percent of marine areas by 2030, in what is known in U.N. jargon as the 30×30.

This includes the complete or partial restoration of at least 30 percent of degraded terrestrial and marine ecosystems, as well as the reduction of the loss of areas of high biological importance to almost zero.

It also endorsed increasing financial transfers from countries of the industrialized North to nations of the developing South by at least 20 billion dollars by 2025 and 30 billion dollars by 2030, and the voluntary publication by companies for monitoring, evaluation and disclosure of the impact of their activities on biodiversity.

The Global Environment Facility (GEF) will manage a new fund, whose operation will be defined by the countries over the next two years.

With regard to digital sequence information (DSI) on genetic resources, the Global Framework stipulates the establishment of a multilateral fund for benefit-sharing between providers and users of genetic resources and states that governments will define the final figure at COP16 in Turkey in 2024.

The Global Framework also contains gender and youth perspectives, two strong demands of the process that was initially scheduled to end in the city of Kunming, China, in 2020. But because that country was unable to host mass meetings due to its zero-tolerance policy towards COVID-19, a first virtual chapter was held there and another later in person, and the final one now took place in Montreal.

The states parties are required to report at least every five years on their national compliance with the Global Framework. The CBD will include national information submitted in February 2026 and June 2029 in its status and trend reports.

With some differences, civil society organizations and indigenous peoples gave a nod to the Global Framework, but issued warnings. Viviana Figueroa, representative of the International Indigenous Forum on Biodiversity, and Simone Lovera, policy director of the Global Forest Coalition, applauded the agreement in conversations with IPS, while pointing out its risks.

“It’s a good step forward, because it recognizes the role of indigenous peoples, the use of biodiversity and the role of traditional knowledge,” said Figueroa, an Omaguaca indigenous lawyer from Argentina whose organization brings together indigenous groups from around the world to present their positions at international environmental meetings.

“It has been a long process, to which native peoples have contributed and have made proposals. The most important aspects that we proposed have been recognized and we hope to work together with the countries,” she added.

But, she remarked, “the most important thing will be the implementation.”

Goal C and targets one, three, five, nine, 13, 21 and 22 of the Global Framework relate to respect for the rights of native and local communities.

Lovera, whose organization brings together NGOs and indigenous groups, said the accord “recognizes the rights of indigenous peoples and local communities, and of women. It also includes a recommendation to withdraw subsidies and reduce public and private investments in destructive activities, such as large-scale cattle ranching and oil palm monoculture.”

But indigenous and human rights organizations have questioned the 30×30 approach on the grounds that it undermines ancestral rights, blocks access to aboriginal territories, and requires consultation and unpressured, informed consent for protected areas prior to any decision on the future of those areas.

Discussions at the Convention on Biological Diversity summit intensified in the last few days of COP15 and ran late into the night, as in this session on health and biodiversity. But in the end, agreement was reached on a new Global Framework on Biodiversity, which will be binding on the 196 states parties. CREDIT: IISD/ENB

While the Global Framework has indicators and monitoring mechanisms and is legally binding, it has no actual teeth, and the precedent of the failed Aichi Targets casts a shadow over its future, especially with the world’s poor track record on international agreements.

The Aichi Biodiversity Targets, adopted in 2010 in that Japanese city during the CBD’s COP10 and which its 196 states parties failed to meet in 2020, included the creation of terrestrial and marine protected areas; the fight against pollution and invasive species; respect for indigenous knowledge; and the restoration of damaged ecosystems.

Several estimates put the amount needed to protect biological heritage at 700 billion dollars, which means there is still an enormous gap to be closed.

In addition, the Small Grants Program has supported around 27,000 community initiatives in developing countries.

“There is little public funding, more is needed,” Lovera said. “It’s sad that they say the private sector must fund biodiversity. In indigenous territories money is needed. They can do much more than governments with less money. Direct support can be more effective and they will meet the commitments.”

The activist also criticized the use of offsets, a mechanism whereby one area can be destroyed and another can be restored elsewhere – already used in countries such as Chile, Colombia and Mexico.

“This system allows us to destroy 70 percent of the planet while preserving the other 30 percent,” Lovera said. “It is madness. For indigenous peoples and local communities, it is very negative, because they lose their own biodiversity and the compensation is of no use to them, because it happens somewhere else.”

Figueroa said institutions that already manage funds could create direct mechanisms for indigenous peoples, as is the case with the Small Grants Program.

Of the 609 commitments that organizations, companies and individuals have already made voluntarily at COP15, 303 are aimed at the conservation and restoration of terrestrial ecosystems, 188 at alliances, and 159 at adaptation to climate change and reduction of polluting emissions.

Images of the planet’s sixth mass extinction reflect the size of the challenge. More than a quarter of some 150,000 species on the IUCN Red List are threatened with extinction.

The “Living Planet Report 2022: Building a nature-positive society”, prepared by the WWF and the Institute of Zoology in London, shows that Latin America and the Caribbean has experienced the largest decline in monitored wildlife populations worldwide, with an average decline of 94 percent between 1970 and 2018.

With a decade to act, each passing day represents more biological wealth lost.