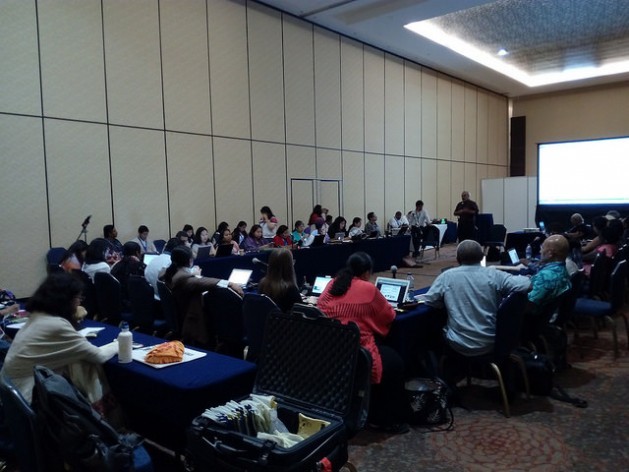 Representatives of native peoples all over the world take part in a meeting during the United Nations Conference on Biodiversity in the resort city of Cancún, Mexico. Indigenous delegates in the summit are defending their rights and their natural resources, which are threatened by climate change, the extractive industries and biopiracy. Credit: Emilio Godoy/IPS

CANCUN, Mexico, Dec 12 2016 (IPS) - “We don’t have access to marine areas, because most are protected areas or are in private hands. We indigenous people have been losing access to our territories, as this decision became a privilege of the state,” complained Donald Rojas, a member of the Brunka indigenous community in Costa Rica.

The complaint from the head of the non-governmental National Indigenous Council of Costa Rica was in response to the ban keeping the Brunka and Huetar people from entering five of their ancestral land and sea territories, after they were declared natural protected areas.

“That restricts access to and management of resources,” said Rojas, who is a member of one of the eight native peoples in that Central American country of 4.8 million people, where 104,000 indigenous people live on a combined area of 3,500 square km.

Rojas is one of the Latin American indigenous leaders participating in different events and forums in the United Nations Biodiversity Conference, which has brought together nearly 6,500 delegates of governments, international organisations, academia and civil society in Cancun, Mexico from Dec. 2-17.

Native people used to fish and gather food in these areas located near the Pacific and Atlantic Oceans, within Costa Rica’s exclusive economic zone (EEZ).

This conflict reflects the growing exploitation of EEZs by the states, which at the same time face an obligation to increase their protected marine areas and clean up the oceans – a contradiction that generates friction, and where the local communities are often victims.

This collision of interests has been seen during the global summit on biodiversity in the coastal city of Cancún, 1,200 km southeast of Mexico City, where the 13th meeting of the Conference of the Parties to the Convention on Biological Diversity (CBD), or COP13, as well as other intergovernmental events and forums related to the preservation of the planet’s natural wealth, is taking place.

In the EEZ, which comprises a 200-nautical mile strip (240 km) from the coast, traditional activities are carried out such as fishing, extraction of oil and dredging of ports, that now extend to ultra-deep water drilling, underwater mining and extraction of minerals from polymetallic nodules.

Altogether, protected marine areas cover about 15 million square kilometres or 4.12 per cent of the world’s oceans, which is still far from the goal of 10 per cent, although the United Nations Environment Programme (UNEP) highlighted in Cancún the increase achieved in recent years.

But protection of coastal and marine areas under national jurisdiction has already reached 10 per cent, according to the “Protected Planet Report 2016” by UNEP and other international and civil society organisations. 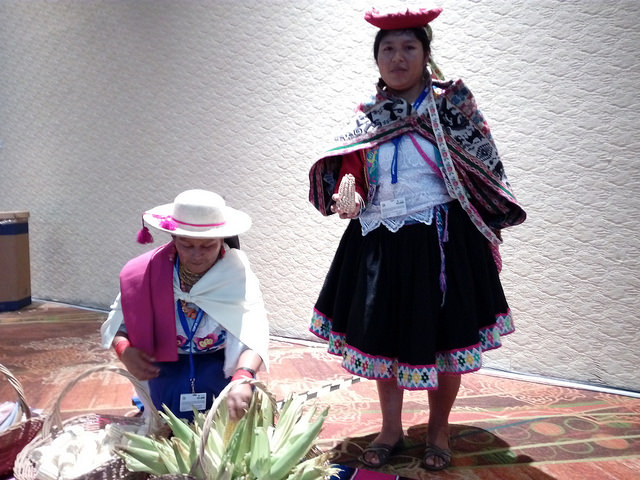 However, only 0.25 per cent of areas beyond national jurisdiction are protected, which demonstrates a significant gap in conservation efforts and underlines the urgent need to seek ways to address the challenges of expanding protected areas.

Goal 11 of the 20 points of the Strategic Plan for Biological Diversity 2011-2020, wbich includes the Aichi Targets, adopted in 2010 by the state parties to the CBD, states that “by 2020, at least 17 per cent of terrestrial and inland water, and 10 per cent of coastal and marine areas, especially areas of particular importance for biodiversity and ecosystem services, are conserved through effectively and equitably managed, ecologically representative and well connected systems of protected areas and other effective area-based conservation measures, and integrated into the wider landscapes and seascapes.”

Moreover, the 14th of 17 Sustainable Development Goals (SDGs) which the international community has set itself to achieve by 2030 proposes to “conserve and sustainably use the oceans, seas and marine resources for sustainable development.”

The 10 targets included in SDG 14 refer to healthy seas, the sustainable use of resources and the reduction of pollution.

“It’s a big challenge. Two approaches can be adopted. One is based on marine planning and management, and the other on selection of economic sectors and closed seasons,” said Christian Neumann, Marine Ecosystem Services project manager for the Norway-based non-governmental GRID-Arendal, which collaborates with UNEP.

“The general problem is the overexploitation; it’s very difficult to put them (the two approaches) on balance. There is a growing understanding that in order to achieve sustainable development, a healthy ocean is needed,” he told IPS.

Construction projects highlight the contradiction between the exploitation of the EEZs and the preservation of healthy oceans and the rights of coastal inhabitants.

One example near Cancún is the expansion of the port of Veracruz, which is going ahead in spite of the threat it poses to the Veracruz Reef System, a natural protected area that spans coral reefs and subtidal aquatic beds, shallow marine waters, sandy beaches and mangroves.

The reef system was declared a national marine park in 1992.

The project, presented as the biggest port investment in the country in 100 years, includes the construction of two 7,740-metre-long breakwaters, an 800-metre-diameter harbor and nine kinds of dock terminals in a nine-square-km area.

In Honduras, the Misquito indigenous people are waiting to see the results of the oil exploration, which started in 2014 in the department of Gracias a Dios off the country’s Caribbean coast.

“It’s a fishing area, so there is an impact on this sector. We need to know what will happen with those jobs,” Yuam Pravia, a delegate from the non-governmental Moskitia Asla Takanka – Unity of the Moskitia (MASTA) in Honduras, told IPS during the conference.

In 2014, the British BG Group (which has since been taken over by Royal Dutch Shell) began exploration in a 35,000-square-km area granted in concession by the Honduran government.

In an attempt to safeguard their rights, the Misquito people set a series of conditions in order to allow the exploration to go ahead. But since the company failed to comply, the Misquito and Garifuna people are considering withdrawing their approval.

In Costa Rica a dialogue began between the government and indigenous peoples to solve the question of territorial access. “We are losing a fundamental basis of our indigenous identity. Since the government does not acknowledge this, an entire biological and cultural system is being violated,” said Rojas.

For Neumann, energy, mining and waste are becoming serious issues. “We need to consider them. But we have the (question of) economic needs as well. It’s difficult to think about alternatives for millions of fishermen,” he pointed out.

In Pravia’s opinion, governments should protect the rights of communities. “They just issue permits, without considering the impacts. There is a lack of information,” he complained.