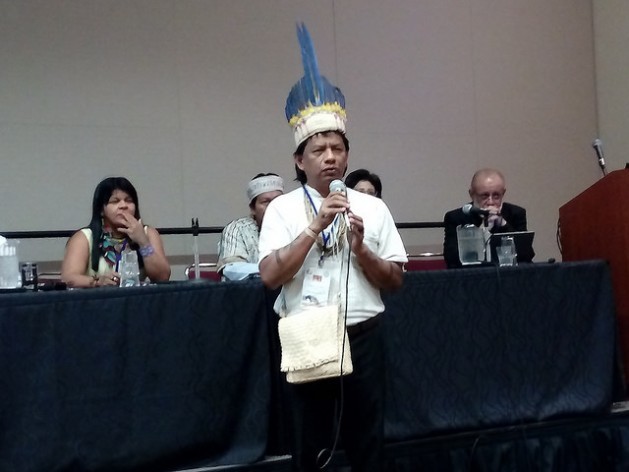 Srewe Xerente, an indigenous man from Brazil, performs a ritual during a forum on ancestral rights at the World Conservation Congress in Honolulu, Hawaii, where native peoples are demanding greater participation in conservation policies. Credit: Emilio Godoy/IPS

HONOLULU, Hawaii, USA , Sep 5 2016 (IPS) - “You don’t convert your own house in a tourist site,” said Oussou Lio Appolinaire, an activist from Benin, wearing a traditional outfit in vivid yellows and greens. He was referring to opening up to tourists places that are sacred to indigenous people.

Appolinaire, who belongs to the Gun people in the West African country of Benin, heads the indigenous-led sustainable rural development NGO GRABE-Benin. He told IPS that “People suffer displacement from sacred sites. If we lose knowledge, we lose ourselves. The sacred is like life. Conservation is the respect of natural law, of every single element in nature.”

“Conservation has been State-centered, despite the poor results. Indigenous people' rights to their lands are not adequately recognised or protected.” -- Victoria Tauli-Corpuz

Thanks to the work of GRABE-Benin and other organisations, the government of Benin approved Interministerial Order No.0121 – the first law of its kind in Africa, which protects sacred forests, granting them legal recognition as protected areas that must be sustainably managed.

Benin has more than 2,900 sacred forests, only 90 of which have so far been formally protected.

Appolinaire’s demand for greater participation by indigenous groups in conservation is being voiced by indigenous representatives in the World Conservation Congress, running Sep.1-10 in Honolulu, the capital of the U.S. Pacific Ocean state of Hawaii.

This year’s edition of the congress, which is held every four years by the International Union for Conservation of Nature (IUCN), has drawn 9,500 participants from 192 countries, including delegates from governments, NGOs, and the scientific and business communities.

Indigenous representatives in Honolulu are focusing on problems related to the Aichi Biodiversity Targets – the 20 points contained in the Strategic Plan for Biodiversity 2011-2020, adopted in 2010 by the states party to the Convention on Biological Diversity (CBD).

An assessment carried out in May by the Subsidiary Body on Implementation (SBI) of the CBD expressed concern over the scant progress made with respect to capacity-building and participation regarding the biodiversity targets among indigenous and local communities.

Aichi Biodiversity Target 14 states that “By 2020, ecosystems that provide essential services, including services related to water, and contribute to health, livelihoods and well-being, are restored and safeguarded, taking into account the needs of women, indigenous and local communities, and the poor and vulnerable.”

Target 18 refers to respect for “traditional knowledge, innovations and practices of indigenous and local communities relevant for the conservation and sustainable use of biodiversity, and their customary use of biological resources.”

Target 11 is for “at least 17 per cent of terrestrial and inland water, and 10 per cent of coastal and marine areas,” to be conserved by 2020. But indigenous people are worried that this will run counter to respect for their rights in their traditional ancestral lands. 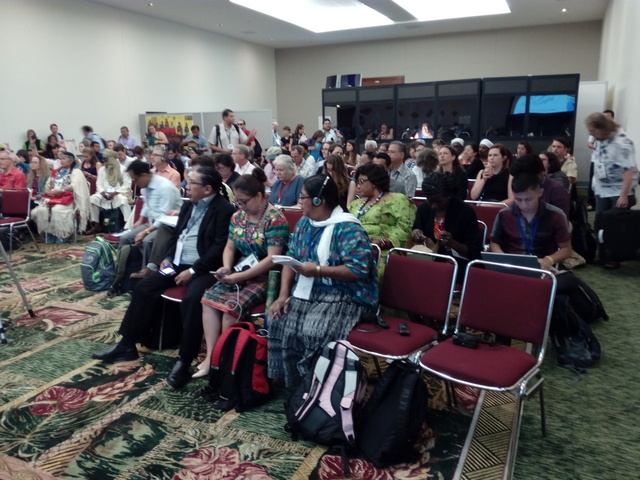 Indigenous leaders from every continent listen to the report by U.N. Special Rapporteur on the Rights of Indigenous Peoples Victoria Tauli-Corpuz during the Sep. 1-10 World Conservation Congress in Honolulu. Credit: Courtesy of Emilio Godoy

“We agree with conservation, but what needs to be discussed is conservation with rights, exercised by indigenous people,” said Julio Cusurichi, the president of the Peruvian NGO Native Federation of the Madre de Dios River and its Tributaries (FENAMAD) and representative of the Shipibo-Conibo community.

“The government has created natural areas in our territories and they are limiting our activities,” he told IPS. “It would seem that indigenous people are obstacles and have to be removed from our territories.”

In the southeastern department of Madre de Dios in Peru’s Amazon jungle region, 60 percent of the highly biodiverse territory is a natural protected area. It is also home to some 10,000 people belonging to seven of the country’s 54 indigenous groups.

One of the common problems is the tendency of governments to create protected areas in indigenous areas, without a proper consultation process.

The congress, whose theme this year is “Planet at the Crossroads”, will produce the Hawaii Commitments, 85 of which were approved by the Switzerland-based IUCN Members’ Assembly, made up of governments and NGOs, prior to the Honolulu gathering.

The debate in Honolulu is focused on 14 motions on controversial issues, like compensation for destruction of biodiversity, closing domestic markets for ivory trade, and improved standards for ecotourism. Of the 99 resolutions, only eight mention indigenous people.

“There is little participation in the implementation of conservation policies; just because an indigenous person heads up an office doesn’t mean indigenous people are participating,” complained Dolores Cabnal, a member of the Q’eqchí community who is director of policy advocacy in the Guatemalan NGO Ak’Tenamit Association.

Her NGO is active in the eastern Guatemalan department of Izabal, where there are three natural protected areas that are home to both indigenous and black communities. In these areas, local residents depend on agriculture and fishing, which leads to clashes with the authorities because the law on nature reserves makes these activities illegal.

Activists and experts agree that it will be difficult to reach the Aichi Biodiversity Targets without the involvement of native peoples.

The United Nations Special Rapporteur on the Rights of Indigenous Peoples, Victoria Tauli-Corpuz of the Kankanaey Igorot indigenous people of the Philippines, complained that states are ignoring the role of native people.

“Conservation has been State-centered, despite the poor results. Indigenous people’ rights to their lands are not adequately recognised or protected,” the special rapporteur said during a meeting with indigenous people in Honolulu.

An estimated 50 percent of the world’s protected natural areas have been established on indigenous lands. The proportion is highest in Latin America and the Caribbean, and in countries like the Philippines, India and Nepal in Asia, and Botswana, Cameroon, Kenya, Namibia, South Africa and Tanzania in Africa.

“The problems of indigenous peoples are not only of one country, they’re global. We have to recognise indigenous law, we can’t change laws of nature,” said Appolinaire.

FENAMAD’s Cusurichi, winner of the Goldman Environmental Prize, calls for co-management by governments and local communities. “We need secure land tenure and it must include resource management and food security,” he said.

In Guatemala, indigenous organisations plan to present a draft law in Congress for the regulation of their rights, natural protected areas, and extractive activities.

Cabnal said the government should study which peoples are in natural protected areas, why they are there and what they need, rather than trying to drive them out.”

The concerns expressed in Honolulu will also be presented at the 13th meeting of the Conference of the Parties to the CBD, to be hosted by Cancun, Mexico from Dec. 4-17.