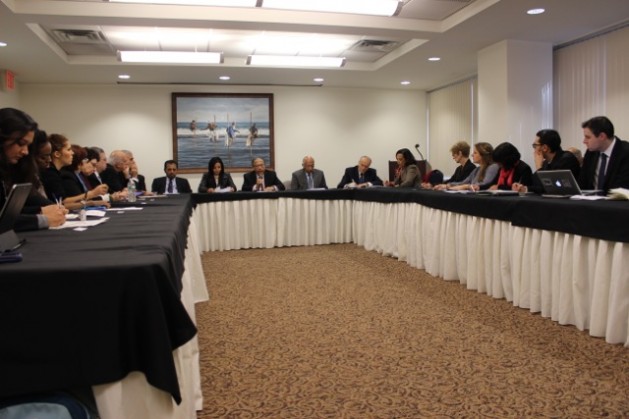 Ambassador Anwarul K. Chowdhury chaired the Forum on Nov. 18, 2014 in New York at the Permanent Mission of Sri Lanka to the United Nations. Credit: Roger Hamilton-Martin/IPS

"We should come out of our narrow boundaries, not only of ourselves but of our communities." -- Ambassador Anwarul K. Chowdhury

“The concept of global citizenship has challenged the minds of humans for a very long time although its exact definition has never really crystallised,” Kohona said.

The idea was famously put forth by Tony Blair during a speech in Chicago in 1999. “We are all internationalists now, whether we like it or not. We cannot refuse to participate in global markets if we want to prosper. We cannot ignore new political ideas in other countries if we want to innovate,” Blair said.

Ambassador Kohona said that even after the collapse of the empires spawned by the Westphalian system, the growth of powerful individual states has not encouraged the development of a genuinely global system.

Kohona stressed the importance of the United Nations as an institution in which to hold up the principle of global citizenship.

“The establishment of the United Nations has created the forum for humanity to make an effort to address common issues together from a global perspective. It is the most effective forum available to all nation states. The United Nations and its agencies have been successful in generating sympathy for the usefulness of approaching many of today’s challenges together.”

The Forum was chaired by Ambassador Anwarul K. Chowdhury, former representative for Bangladesh and the prime mover of the 1999 General Assembly resolution that adopted the U.N. Declaration and the Programme of Action (PoA) on the Culture of Peace.

“When we speak of global citizenship, certain thoughts come to mind,” he said. “The first thing to understand is spirituality. What are our values, what are our commitments as human beings? The second is the belief in the oneness of humanity. We should come out of our narrow boundaries, not only of ourselves but of our communities.”

Despite challenges, many of the panellists agreed that the promotion of global citizenship is advancing against the headwinds of the purported clash of civilisations, declining resources, and cultural cynicism.

Lichem noted that global citizenship needs to be seen in the context of a system that espouses norms such as the “responsibility to protect,” a principle that puts the international community above the nation state when it comes to protecting its own citizens.

“Global citizenship is to be understood as a citizenship with human rights as a way of life,” Lichem said.

U.N. Secretary-General Ban Ki-moon has identified global citizenship as the third priority area in his Global Education First initiative, seeing it as important that students don’t simply learn how to pass exams and get jobs in their own countries, but are instilled with an understanding of the importance of respect and responsibility across cultures, countries and regions.

“Global citizenship is a fight against limbo,” said Erol Avdovic, vice president of the United Nations Correspondents Association. “It is the fight against misconception and against ignoring – or even worse, manipulating – simple facts.”

The United Nations Alliance of Civilizations, an entity that explores the roots of polarisation between societies and cultures was in attendance at the Forum, with spokesperson for the High Representative Nassir Abdulaziz Al-Nasser, Nihal Saad noting that education for global citizenship “has the power to shape a sustainable future and better world.

“Educational policies should promote peace, mutual respect and environmental care. It does not suffice for education to produce individuals who can read, write and count. Education should and must bring shared values to life.”

Saad’s sentiments were shared by Monte Joffee, Soka Gakkai International’s USA representative, who said, “Our curriculum needs to include more topics of a global nature so our students can develop empathetic resonance with ‘the other’.

“This does not reach to the core of today’s educational crisis. Speaking only of American education, I must say that the inequalities of educational funding, the levels of despair and hopelessness in too many of our communities… are numbing realities and ‘add-ons’ to the curriculum about global citizenship are not the solution.”

Joffee related the story of Anand Kumar, an Indian mathematician who is well known for his “Super 30” programme in Patna, Bihar. It prepares economically disadvantaged students for the entrance examination for the renowned Indian Institutes of Technology (ITT) engineering schools, with great success.

His programme selects 30 talented candidates from disadvantaged, tutors them, and provides study materials and lodging for a year.

Joffee noted that this story provides a great model for Global Citizenship Education. “Educators must say, ‘I will start right here, with the student right in front of me.'”

Ramu Damodaran from United Nations Department of Public Information Outreach Division also spoke of the importance of academics being given more opportunities to have a voice at the United Nations.