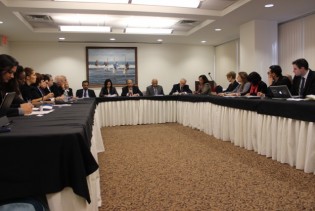 By Pavol Stracansky
The fifth global forum of the United Nations Alliance of Civilisations (UNAOC), founded to promote intercultural understanding and dialogue to bring civilisations closer, came to a close Thursday after two days of talks, at which world leaders restated their commitment to the Alliance’s ideals and pledged to build on the foundations it had laid to expand its work.

Alliance Aims to Get Past Intolerance

By Pavol Stracansky
A UN summit designed to promote tolerance, plurality and global inclusiveness of civilisations has opened with dire warnings of the threat of religious and ethnic intolerance – at the same time as many states that have ostensibly signed up to the UN’s ideals continue to enforce laws and practices restricting religious freedom, and implicitly marginalising communities.

Emerging leaders from the Middle East to experience US during election.

By IPS Correspondents
Twelve young leaders from North Africa and the Middle East are arriving in New York this week with the aim of creating new alliances and gaining knowledge and understanding of the United States and Europe.