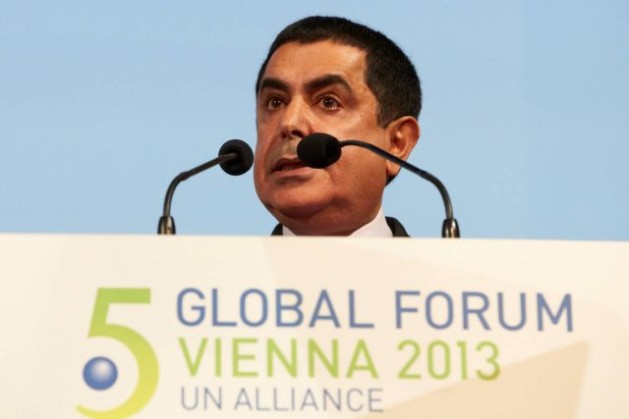 VIENNA, Mar 1 2013 (IPS) - The fifth global forum of the United Nations Alliance of Civilisations (UNAOC), founded to promote intercultural understanding and dialogue to bring civilisations closer, came to a close Thursday after two days of talks, at which world leaders restated their commitment to the Alliance’s ideals and pledged to build on the foundations it had laid to expand its work.

But the summit also heard of the challenges and threats to pluralism and diversity in a world with rising levels of intolerance and extremism, and that the Alliance, together with governments, media, civil society and the corporate sector, must work to overcome those challenges.

Incoming High Representative of the UNAOC, Nassir Abdulaziz Al-Nasser, spoke to IPS at the end of the conference about the Alliance and his aims as he leads the organisation over the next five years.

Q: During the forum you outlined the main aims of what you want to do with the Alliance. Do you believe that under your leadership the Alliance can effect real, meaningful and concrete change?

A: My new role as High Representative is a very challenging one, and while in the past I have held a number of very important posts, this one in particular is extremely important. My predecessor, President Jorge Sampaio, did a great job. But as I said during the forum, I want to upgrade the work that the Alliance has done until now and I have my own good ideas. But in the end we have to convince states, and civil society, academia, the private sector, international organisations, to collectively implement what has been agreed both here in Vienna, and at previous fora.

Q: A lot of mainstream media did not report on the forum. Is that a signal that the media is failing to address the Alliance’s ideals in some way and if so, does this mean that the Alliance has to find another way of getting its message across?

A: Media is very important for the Alliance. It is one of the key things we are focused on. But some countries have covered this conference in quite a big way. I come from Qatar and I saw that newspapers there had very large coverage of the forum. But all the speeches here at this forum, from the UN Secretary General Ban Ki-Moon, the President of Austria, Heinz Fischer, from me, and from other high level representatives of states, make it clear that the Alliance’s role is expanding, not decreasing.

Q: The forum heard a lot about the importance of education in dealing with prejudices, especially in the education of school children. Does the Alliance plan to work with national governments over their school curricula to build its ideas into school teaching at early levels?

A: The Alliance is going to work very closely with UNESCO. There are many initiatives in the world on this, such as the one launched last September by the U.N. secretary-general, ‘Education First’, and others. Education is one of the pillars of the Alliance’s work and we will work very hard with all agencies of the U.N. at national, regional and sub-regional level.

Q: A key theme at the forum was religious intolerance and religious extremism and how while it is perceived to be largely associated with Muslims, that there is plenty of extremism among Christians and other religious groups. This has helped fuel negative perceptions of Muslims. Do you see the Alliance having a role in correcting these perceptions?

A: The Alliance is here to serve the international community, not just one country or one religion, and the Alliance is about the idea of ‘one humanity, different cultures’. I will try my best to promote dialogue and cultural peace and try to engage with civil society because many of those organisations are religious and we can really listen to them and see how we can create cultural peace and bring people together through dialogue, creating harmony instead of division, and reduce intolerance and hatred. My job is going to be very challenging and I will do my best to implement what has already been agreed at our previous fora and what has been agreed here as well.