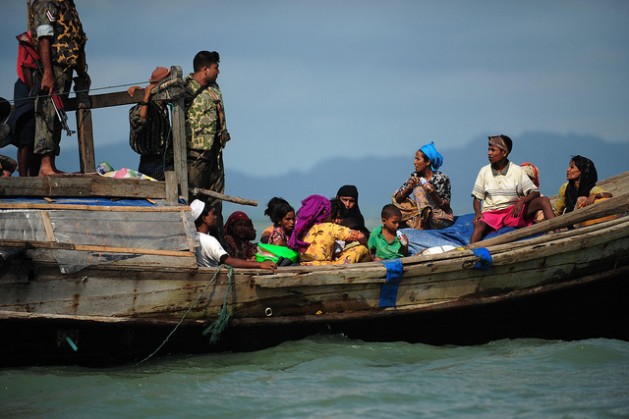 Border guards in Bangladesh refuse entry to Rohingya refugees from Myanmar. Migration is one factor that can contribute to polarising communities. Credit: Anurup Titu/IPS

UNITED NATIONS, Feb 25 2013 (IPS) - Amidst the rising tide of racial and religious intolerance worldwide – including xenophobia, anti-Semitism and Islamophobia – the U.N. Alliance of Civilizations (UNAOC) will meet in the Austrian capital of Vienna later this week to strengthen cross-cultural relations in a world it describes as “alarmingly out of balance”.

In our inter-connected information age, says Secretary-General Ban Ki-moon, “we may not be able to prevent every merchant of hate in every corner of the world.

“But we can build bridges that are strong enough to withstand those forces,” he adds.

The television cameras focus on the fringe. The extremists gain easy publicity with their bonfires of bigotry.

And the task of constructing those bridges is one of the primary responsibilities of UNAOC, which holds its Fifth Global Forum aimed at “Promoting Responsible Leadership in Diversity and Dialogue.”

The Vienna Forum, scheduled to take place Feb. 27-28, will be the first to be headed by the new High Representative of UNAOC Nassir Abdulaziz Al-Nasser of Qatar, a former president of the U.N. General Assembly and chairman of the Board of Directors of Inter Press Service (IPS) news agency.

Asked about the most effective way of remedying the growing malaise, UNAOC Director Matthew Hodes told IPS intolerance and discrimination have been a sad, unacceptable part of the human experience, and may never be completely eradicated.

“What the international community can do, what U.N. bodies have and will continue to do is maintain the fight against these scourges,” he said.

Whether it is by setting standards through international instruments, vigilant reporting of abuses of those standards, or proactive efforts at reconciliation, “We all have a role to play in that fight,” he added.

Meanwhile the spread of hate crimes has also been attributed to sensational coverage by the international news media.

When the United Nations commemorated International Day of Peace last September, the celebrations were marred by news of widespread rage in the Islamic world, a continued bloody civil war in Syria, suicide bombings in Iraq and Afghanistan and violent demonstrations in Pakistan, Indonesia and Bangladesh against a video caricaturing the Prophet Muhammad.

In his address, the secretary-general warned that the world was facing global protests and violence in response to another ugly attempt to sow bigotry and bloodshed.

Asked whether the press is a contributory factor to the current state of hate crimes through sensationalism in news reporting, Hodes told IPS, “The societies in the world that are the most free are also those with the most unfettered media.”

He pointed out that those who work in the media are subject to professional standards set in each country: standards that when followed tend to ensure responsible reporting.

“And let’s be clear: when I speak about vigilant reporting of abuses I am speaking not only of international civil servants but the media as well,” he added.

Hodes said the media has a central role to play in increasing the public understanding of sensitive issues, including religious intolerance, migration and diversity.

All of these factors can contribute to polarising communities.

“The UNAOC tries to address this challenge by regularly convening editors, media owners and experts to establish a platform for dialogue leading to concrete recommendations,” said Hodes. “And we aim to organise a meeting around religion and religious intolerance in the year to come.”

Asked about a proposal for an international convention against Islamophobia, one of the most widespread of religious intolerances, he said: “While I would not comment on any particular proposed convention it is apparent that an agenda of fear has taken root in certain parts of the world”.

But that cannot justify the vilification of an entire religion or its adherents, he added.

“Islamophobia is a real phenomenon in certain places and must be addressed,” Hodes said.

A concept paper jointly prepared by the UNAOC Secretariat and the Austrian Federal Ministry for European and International Affairs, which will be discussed at the Vienna Forum, will focus on how responsible leadership can make a difference in the following three major issues:

First, promotion, protection and full enjoyment of the right to religious freedom in a context of religious pluralism which consists not only of greater diversity, but also of perceptions of that diversity and new patterns of interaction among religious groups;

Second, media pluralism and diversity of media content and their contribution to fostering public debate, democracy and awareness of diverse opinions;

Third, shaping a new narrative for migration, integration and mobility in the global economy.