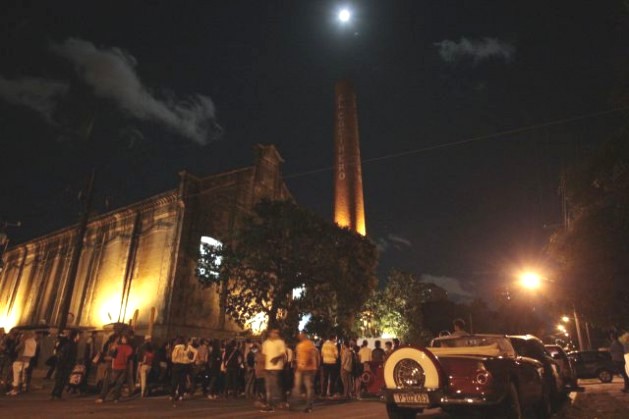 A crowd outside the Fábrica de Arte, a cultural centre that is managed by singer X-Alfonso and self-financed through its ticket sales, although a large part of the initial investment came from Cuba’s Ministry of Sports. Credit: Jorge Luis Baños/IPS

HAVANA, Apr 23 2014 (IPS) - Standing in line for a concert at the Centro Cultural Fábrica de Arte, a cultural centre in the Cuban capital, Alexis Cruz anxiously checks his billfold, where he has the price of the ticket – 50 Cuban pesos (two dollars) – and three CUCs (equivalent to one dollar each) to buy something to drink.

“I can rarely attend these things, because they cost one-quarter of my monthly salary of 450 pesos [19 dollars],” the 26-year-old lawyer tells IPS. “But all prices are this high or higher, and at least here I can hear good music.”

The shortage of attractive, affordable entertainment and cultural events is becoming a problem in Cuba, where 20 dollars is the average monthly salary paid by the state – which still employs about 80 percent of the workforce, despite efforts to pare down the government payroll.

As family budgets have shrunk in a crisis that has dragged on for over two decades, it is nearly impossible for most to afford the steep entrance price at the new discotheques and clubs that have begun to liven up Cuba’s nightlife since economic reforms began to be introduced in 2008, opening up more space for private enterprise.

Since then, differences in socioeconomic levels have become more pronounced.

While Havana’s emerging elite are entertained in the glamorous private bars of upscale neighbourhoods like Vedado, Miramar and Playa, there are few options for the rest of society.

Although Cuba has nearly 300 cinemas, 361 theatres, 267 museums and 118 art galleries where programming is financed by the state and ticket prices are subsidised, the installations are increasingly run-down, the quality is irregular, the schedules are inflexible and the publicity is inadequate.

“If I want to go out and dance at a nice place, I save up for a month or two, which I am able to do thanks to my mom, who brings in almost all of the income in our household from cooking sweets for a private cafeteria,” says Jorge Mario Rodríguez, 24, who lives in the poor suburb of El Palmar.

Like other young people, Rodríguez, who works as a bill collector for the state-run Empresa Eléctrica power company, likes reggaeton, pop and salsa. But he does not frequently go to concerts, the theatre or the movies.

“Those places are downtown, and transportation is really bad,” he says. “When there isn’t a party at some friend’s house, I try to stay home watching series or movies on DVDs.”

Besides the programming of the five government TV channels, there is an informal alternative network that offers the latest international series and movies.

The network includes shops where people can rent and copy movies, TV series and music, and stalls that sell pirate copies of albums – businesses that have been legal since 2010, when the government expanded the number of areas where private enterprise is allowed.

Very popular is what is known as “the package of the week”, which weighs one terabyte and includes the latest series, soap operas, movies, documentaries, cartoons, videoclips, reality shows, music, software, antivirus updates, language courses, magazines and many other things – all for 50 pesos (two dollars).

Every Tuesday, Laudelina Rodríguez’s living room is packed with people copying portions of the “package” onto USB drives. Paying between five and 20 Cuban pesos, customers take home up to eight gigabytes of widely varying content.

Rodríguez, an officially registered “cuentapropista” or self-employed worker, distributes some 600 gigabytes and three or four complete “packages” a week to her roughly 300 clients in the Cerro neighbourhood. She says 65 percent of her customers are under 30 years of age.

“Most in demand are the ‘narconovelas’ [soap operas about the world of drug trafficking] and Mexican ‘telenovelas’ [soap operas], followed by series from the United States and reality talent shows like ‘La Voz Kids’ and ‘Nuestra Belleza Latina’,” Rodríguez tells IPS.

“They also like Cuban films and comedy shows. But national programming is almost never included, maybe because no one wants to have copyright problems,” she says.

Intellectuals are scandalised by this kind of cultural consumption in Cuba, whose socialist government has tried for 50 years to build “the new man”, guided by values that differ from those of Western capitalism.

The Apr. 11-12 congress of the National Union of Cuban Writers and Artists (UNEAC) called for efforts to combat the increasingly banal tastes of the population. 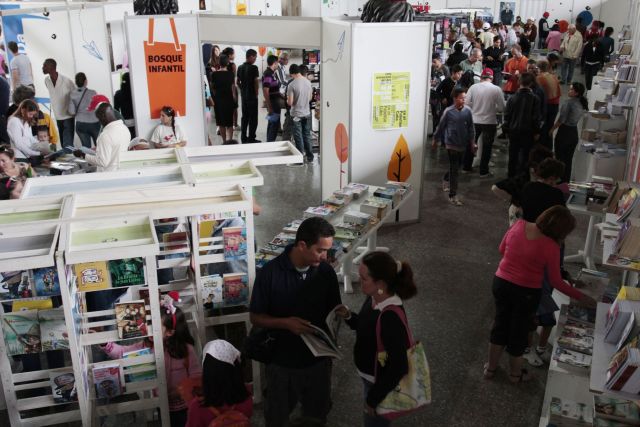 Havana’s International Book Fair is one of the most popular, and lucrative, cultural events in Cuba. Credit: Jorge Luis Baños/IPS

“We have to analyse the ‘package’ so people will understand that they are being cheated,” writer Abel Prieto, a former culture minister, said at one of the televised sessions of the UNEAC congress.

In an interview in the online magazine OnCuba, Prieto, who is now a presidential adviser, acknowledged the state’s responsibility with respect to what he considered the deformation of popular tastes.

He added that the production of entertaining national cultural programming was urgently needed – content that could draw in young people but wasn’t “empty of meaning.”

Those meeting at the congress also called for an easing of longstanding tensions between art and the market, in this socialist country where mass access to culture has been subsidised for decades.

The economic reforms, which reached the world of culture in 2010, eliminated the subsidies, and now artists and institutions have to find ways to become self-financing.

In 2013, the budget for culture, art and sports was reduced by 172 million dollars with respect to the 2012 budget. And only one percent of public spending went to that sector, according to official statistics.

The UNEAC congress proposed evaluating non-state management of cultural projects, such as cooperatives.

But the government tends to react to independent initiatives by adopting restrictions, as illustrated by the closure of privately run film parlours on Nov. 2, on the argument that they had never been authorised.

Although they cost more than the state-run cinemas, in just over a year the film salons had become increasingly popular, offering a broader menu of options in suburban areas.

Ulises Aquino, director of the Ópera de la Calle, which brings together 120 artistes, tried to make the company self-financing with shows in his private restaurant El Cabildo. But the government closed down his restaurant in 2012 over alleged management irregularities.

“We covered our personal expenses and financed our artistic productions,” Aquino tells IPS. “But [the authorities] got scared when international media outlets said I had built an ‘empire’ by improving the living standards of our artistes.”

Without the restaurant, Ópera de la Calle now depends on the budget assigned by the National Council for Performing Arts, which does not cover reparations of equipment, or musical instruments or costumes, and does not cover the cost of lunches and community work.

“Subsidised creations and creators must continue to exist – not due to tradition or name, but because they truly contribute to the spiritual and cultural welfare of the nation,” wrote Elena Estévez in the interactive section of the IPS Cuba website.

Economist Tania García, an expert on culture, tells IPS that subsidising ticket prices to cultural events is an investment in human growth.

In the last five years, the arts accounted for between 4.3 and 4.7 percent of GDP. But to that must be added, according to García, the value of cultural exports as well as taxes on the personal incomes of artists.