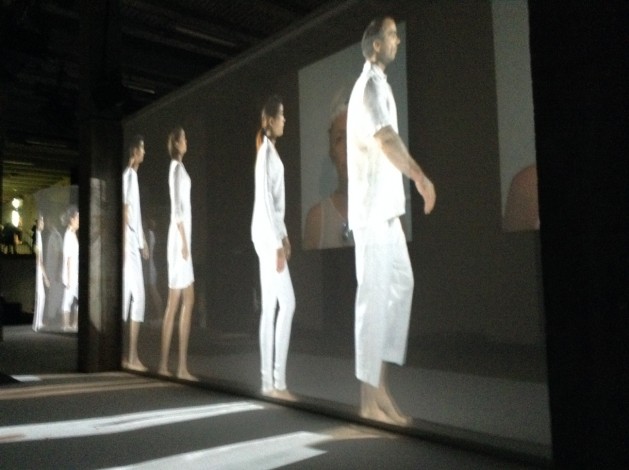 A scene from ‘The Incredible Adventures of Border Crossers’ by Singaporean artist Ong Keng Sen at the ‘Singapour en France - le festival’ arts fest, which aims to highlight the power of culture and its “ability to bring people together and to cross boundaries”. Credit A.D. McKenzie/IPS

PARIS, Mar 29 2015 (IPS) - As Singapore mourns the passing of Lee Kuan Yew, the late former prime minister’s vision of a dynamic and vibrant state is being reflected in a major arts festival in France.

‘Singapour en France – le festival’ was launched Mar. 26 in Paris, against the backdrop of a massive out-pouring of grief in Lee’s homeland, following his death three days earlier.

“As Singaporeans grieve and reflect on our loss, we continue to honour Mr. Lee’s vision of establishing Singapore on the international stage,” said Rosa Daniel, deputy secretary of the Ministry of Culture, Community and Youth, who delivered a speech on behalf of her chief Lawrence Wong at the opening of the festival.

“We used to be derided as just clean, green, safe and orderly, but dull and antiseptic. Now we have a lively city with the arts, culture, museums, art galleries, the Esplanade Theatre by the Bay, a Western orchestra, a Chinese orchestra ... And we have resident writers and artists” – Lee Kuan Yew, late former Prime Minister of Singapore

The event, which will run until Jun. 30, celebrates the 50th anniversary of the Asian city state’s independence, as well as 50 years of diplomatic ties between Singapore and France. It aims to showcase the art, culture and heritage of Singapore through more than 70 activities in cities throughout France.

“We’re a young nation … but we’re bold, modern and willing to experiment,” said Daniel, adding that the festival would also highlight the power of culture and its “ability to bring people together and to cross boundaries.”

Lee himself recognised that Singapore had made its “share of mistakes” in the cultural heritage area by destroying buildings in its rush to modernise, but in his later political years he emphasised the importance of safeguarding this heritage and of having a “top-class” arts and entertainment sector.

“We used to be derided as just clean, green, safe and orderly, but dull and antiseptic,” he said in 2010. “Now we have a lively city with the arts, culture, museums, art galleries, the Esplanade Theatre by the Bay, a Western orchestra, a Chinese orchestra … And we have resident writers and artists.”

Some of those artists travelled to France for the opening of the festival and gave a view of the changing art scene in Singapore, pushing the boundaries in a region noted for traditional values and not particularly famous for freedom of expression.

In ‘Secret Archipelago’ at Paris’ Palais de Tokyo modern art museum, visitors can view a range of experimental and contemporary work, created by Singaporeans and artists from other Southeast Asian nations such as Malaysia, Vietnam and Myanmar.

“Their works represent a bridging of the gap between past and future and the creative tension between memory and tradition on the one hand and contemporary Western influences on the other, while bringing their own particular languages to modern art,” say the curators. 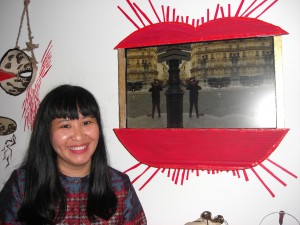 “I don’t consider myself a strong person, but art gives me a way to express myself” – AnGie seah, one of the Singaporean artists exhibiting at the ‘Singapour en France – le festival’ arts fest in Paris, March 2015. Credit A.D. McKenzie/IPS

AnGie seah, an artist who includes performance in her work, embodies these concerns – literally – in her presentation titled ‘Howl of the Hallows’ in the Palais de Tokyo’s huge basement gallery.

Here visitors can listen to the screams of various people through a headphone while watching seah (who prefers her name to be lower-cased) perform the screams on video.

“I think the human voice is powerful and I like to use it in my art,” said the artist, who has travelled around France asking people to scream for her, and taping the results.

Her installation included “mini shrines” with pottery or terra cotta representations of body parts such as a hand, with the middle finger sticking up. The shrines give the installation a traditional yet avant-garde feel, inviting visitors to question the symbolism.

“I don’t consider myself a strong person, but art gives me a way to express myself,” seah told IPS.

Not far from her exposition, Vietnamese artists and twin brothers Le Ngoc Thanh and Le Duc Hai, who go by the name of Le Brothers, showed a long rectangle of video screens with military-clad characters in a variety of activities. They told IPS that their work is a call for peace through the depiction of war and soldiers in their self-performed films.

Describing their art further, Singaporean curator Khairuddin Hori said it dissects and questions post-war consciousness of North and South Vietnam, as the brothers “exploit their twin identity as mirror and metaphor.”

Other artists incorporated everyday items such as plates and household figurines to question identity while also re-affirming their history and culture. An artist from Malaysia said he had listened to senior citizens and used their stories to create his installation, which covered a large part of one wall.

Alongside the ‘Secret Archipelago’ exhibition, the opening of the festival included a five hour-long multi-media performance titled ‘The Incredible Adventures of Border Crossers’, with sound, dance, film, fashion and photography.

“Real-life border crossers who have never acted before are invited to be performers in this piece,” said the creator. “Sharing their everyday stories as incredible adventures, they inhabit the installation as singing, dancing and re-performing pioneer travellers.”

The “show” is described as an artwork that “envisions communications in a not-so-distant future megapolis.”

The visitor cannot help thinking that it captures something essential about Singapore, with its multi-ethnic population, its vibrant history as a trading post and its sometimes controversial efforts to build a cohesive, economically strong nation. The show also seems to evoke the late Lee’s vision of his homeland.