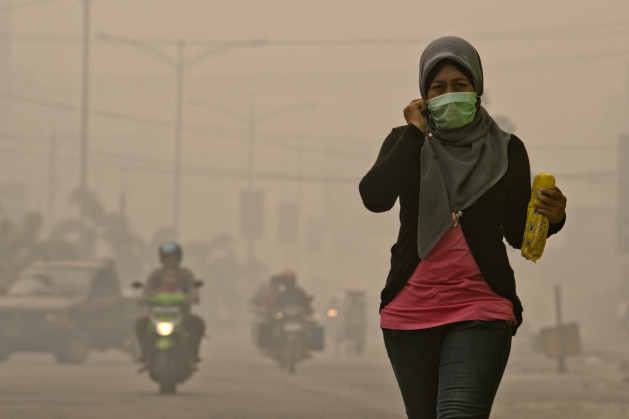 A woman in Riau in Sumatra wears a mask for protection from the pollution caused by forest fires. Credit: Ulet Ifansasti/Greenpeace.

KOLKATA, India, Aug 11 2013 (IPS) - When there is feasting in India, Pakistan and Bangladesh, there could just be a connection between the celebrations and the fires on Indonesia’s Sumatra Island that trigger frequent transboundary smog.

And when China’s population of more than a billion consumes yet more noodles, Malaysia should perhaps brace for greater air pollution.

Though not as simplistic and direct, there is nevertheless a tangible link among all these happenings and countries. It’s called palm oil, Asia’s new “liquid gold”.

Southeast Asia – read Indonesia and Malaysia – are the biggest producers of the oil obtained from the fruit of the oil palm tree, accounting for nearly 85 percent of global output.

India and China are its biggest consumers, with Pakistan and Bangladesh emerging as growing markets. As the major buyers, they not only influence price and production, but can also impact the way the oil is produced, currently controversial because of its adverse effect on the environment.

Dr Reza Azmi, founder and executive director of Wild Asia, a social enterprise in Kuala Lumpur working for sustainable tourism and agriculture, explains why oil palm has become such a hot product in Asia.

“It provides a higher source of income compared to other cash crops like paddy or rubber,” he tells IPS. Farmers can harvest bunches of oil palm fruit twice a month, while paddy can be harvested twice a year. Oil palm also produces the highest yield per area compared to other crops.

Moreover, it is cheap and used in an amazing variety of products: food from Nestle’s Kitkat to halwa, the dessert obligatory during most festivities in South Asia; a wide array of cosmetics, from lipsticks to shampoos; and biodiesel.

However, the wonder oil carries an ecological price tag.

As farmers fell trees and set fire to vegetation to clear more area for cultivation, it destroys forests and endangers wildlife, triggering smoke and recurrent hazes.

This June, Southeast Asia suffered the worst air pollution in 16 years. Smog from Indonesia choked Malaysia and Singapore. Visibility decreased, schools were closed and public programmes cancelled. Hospitals saw a rush of patients with respiratory diseases. A diplomatic row erupted between Singapore and Indonesia over culpability.

A transboundary meet in Kuala Lumpur in July saw the environment ministers of Indonesia, Malaysia, Brunei, Thailand and Singapore agree on a joint haze monitoring system. Indonesia also agreed to ratify a regional treaty to fight smog. But the fires continue to burn.

This is where China and India can play a major role by insisting on buying only palm oil produced without endangering forests.

The movement for sustainable production gathered momentum in 2004 with the formation of the Roundtable for Sustainable Palm Oil (RSPO), an industrial initiative to persuade planters to keep off primary forests and conservation areas and minimise their environmental footprint.

“A number of countries are making national commitments to sourcing only sustainable palm oil by 2015, including the Netherlands, Belgium, the UK, France and Germany,” he added.

However, the two biggest consumers, China and India, are yet to follow the trend.

“While businesses in the West are making big strides to support the sustainable production of palm oil, large volume users in India and China are yet to get on board,” says Bob Norman, general manager at GreenPalm, an RSPO associate. “If the movement is to be a global success and achieve its aims, food service companies, retailers and other volume users in Asia need to engage with this issue.”

After India, China is the second-largest importer of palm oil. The demand is expected to grow 10 percent annually, which would make China the largest market by 2015.

However, only 15 Chinese companies are RSPO members so far.

Still, Webber thinks the sustainability campaign will find more takers after RSPO’s alliance with the Chinese Chamber of Commerce of Foodstuffs and Native Produce under the ministry of commerce.

Dr B. V. Mehta, executive director at the Solvents Extractors’ Association in Mumbai estimates the Indian demand will increase by three to four percent per year as the cheap oil is used more and more in India’s food and hotel industries.

“Considering their use and import, it is imperative for Indian companies to move towards sustainable palm oil and practices,” says Webber. “By committing to source only certified sustainable palm oil, Indian companies can take a step towards ensuring future supply of clean palm oil while also taking responsibility for the global impact of their imports on the environment and the climate.”

Indian companies began joining the RSPO in 2006. Currently, there are 26 members.

Webber calls it a “strong indicator that business commitment and demand for sustainability is increasing in the country,” but Mehta says the huge population that still remains below the poverty line will pose a tough challenge.

“India supports sustainability but the poor Indian consumer is looking for cheap oil,” Mehta says. “People in the EU can afford to pay a higher price for certified palm oil but not in India, where thousands are struggling to feed themselves.”
Norman remains optimistic. “Economic prosperity in India and China has seen a rise in ethically conscious consumers,” he says. “Over time, this broader understanding and concern about the issues surrounding the production of palm oil will invariably lead to an increase in demand for food manufacturers and retailers to support sustainable production.”