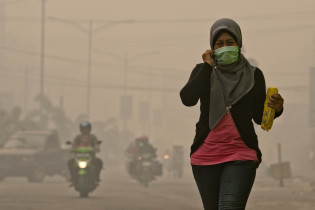 By Marianela Jarroud
"We are facing a very alarming situation, and solutions are urgently needed," said Cecilia Sepúlveda, the dean of the University of Chile medical school, after it was announced that 4,200 people a year in this country die from causes directly attributable to smog and other kinds of pollution.
ADVERTISEMENT ADVERTISEMENT