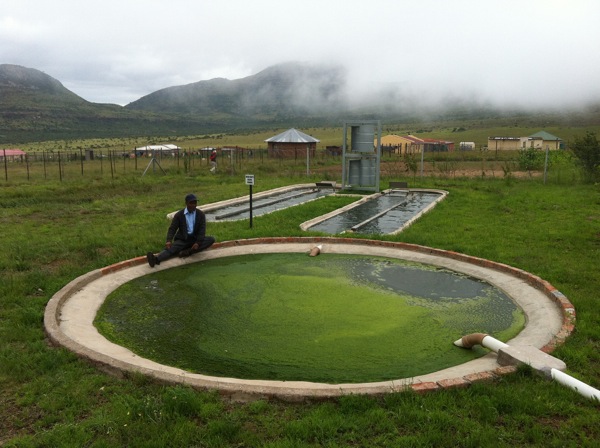 Three Crowns Rural School in South Africa is a leader in recycling, turning various waste into gas and fertiliser, and recycling its water. Above, the bio-digester. Credit: David Oldfield/IPS

STOCKHOLM, Aug 29 2012 (IPS) - When the international community was struggling to ward off a potential decline in development aid in early 2000, it came up with a novel idea: a proposal for “new and innovative sources of financing”, including a tax on airline tickets and a levy on foreign exchange transactions.

The funding, mostly from the tax alone, first proposed at the 2002 U.N. conference on Financing for Development, has already generated over 11.7 billion dollars, according to the World Bank.

And now, the Swedish government has come up with a variation of that proposal: a new finance instrument called Water Innovation Challenge Fund (WICF) whose primary objective is to capture, promote and implement “innovative ideas and new technologies”  in water resource efficiency.

The proposal, announced at the international water conference in Stockholm this week, comes at a time when the United Nations has repeatedly warned of an impending water crisis in the next two or three decades.

Or as Alain Vidal, director of the Challenge Programme for Water and Food (CPWF), describes as “a perfect storm”  – food shortages, water scarcities and insufficient energy resources – collectively destined to hit the world by 2030.

Addressing delegates here, the Swedish Minister for International Development Cooperation Gunilla Carlsson said the new fund is also about finding new ways to sustainably intensify the use of water, land and energy in production to achieve equitable social, economic and environmentally sound development.

“Simply put, we need to create more with less. This to me is innovation at its best,” she said, pointing out that in a finite biosphere, achieving such a combination will require new thinking.

Asked for his expert advice, Dr. Colin Chartres, the director-general of the Colombo-based International Water Management Institute (IWMI), told IPS: “I am highly supportive of the Swedish minister’s proposal.”

“The more we can do to foster and encourage innovation in the water sector, the better,” said Dr. Chartres, the 2012 Stockholm Water Prize Laureate.

He added, “We can’t have water without using energy, and we can’t have energy without using water, and that an increased understanding of the water energy nexus, coupled with efficiency innovation in both sectors, is vital.”

Elaborating on her proposal, Carlsson said innovations have historically changed the lives of millions of people for the better. “Just think of vaccines, improved grain varieties and, more recently, the impact of mobile phones,” she pointed out.

The less well-known innovations are often found in the poorer countries, among large numbers of people surviving on very low incomes but who are very resilient and often creative entrepreneurs, she added.

“These innovations are often about crafting business solutions that are relevant to poor people and about making them available to the many. Low-cost mobile financial services and insurances are among the more recent ideas”.

Carlsson also said innovations have provided many new employment opportunities across Africa. Small affordable packages of improved seeds or fertilisers have reduced the barriers of upfront costs for poor farmers.

Some of the most important growth markets today are African and Asian. Increasingly, business is looking for innovative models building on local ideas and demand, rather than adapting products and distribution processes that were conceived for U.S. or European markets, she noted.

“If we can find similar innovations and scale up in a sustainable manner, the lives of millions of people, if not hundreds of millions, could improve,” Carlsson added.

The Rome-based International Fund for Agricultural Development (IFAD) has been a leading proponent of innovative ideas relating to smallholder agriculture and rural development.

In a statement released here, IFAD says it supports practices that help poor farmers in developing countries to increase the efficiency and effectiveness of their water use.

In Madagascar, old flip-flop sandals were collected by otherwise unemployed people and used to make parts for micro-irrigation equipment.

Besides aiding irrigation, says IFAD, this activity promoted recycling and created jobs for street workers who collect old sandals and for the small businesses that produce the irrigation parts.

Carlsson said that “now more than ever, we need to encourage new thinking in our development assistance” and “reflect on lessons learned and find out whether and what we can do better”.

And one of the most important lessons has to do with partnerships. “It is clear to us that no one single actor can solve development challenges,” she added.

Perhaps two of the time-honoured technologies are wastewater treatment and desalination of sea water.

Asked about its potential, Dr Chartres told IPS:  “Given the cost of desalination and the large requirements for water and agriculture, I don’t see it as a current option, except in a few small niche environments.” But recycling, he said, was a different matter.

“Recycled water can be treated for purpose and it is an excellent way of using urban waste and nutrients,” he said.

And IWMI, which he heads, is currently working on the development business models to encourage more use of recycled waste water.

Meanwhile, Sweden prides itself as a country which inaugurated its first water treatment plant about 150 years ago. Gosta Lindh, managing director of Stockholm Vatten, says his company stands on the foundation that were laid more than a century and half ago.

In Stockholm, food waste and fat are basic raw materials for producing biogas. And inner city buses, garbage trucks and nearly 10,000 passenger cars and taxis are run on biogas.

“We are proud to be able to supply clean and fresh water to an ever-expanding Stockholm. We also take care of waste water and residual products in the most efficient way and reintroduce them to the cycle,” says Vatten.

And in Stockholm, he boasted, “we are proud to say we have world-class water.”