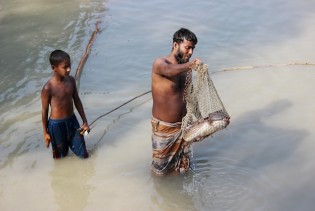 Three Solutions for Water and Sanitation for All

By Oyun Sanjaasuren
This week people gather from around the globe at the annual Stockholm World Week. If previous years are anything to go by, the “Water is life” cliché will be repeated endlessly. But the phrase is useful shorthand for this simple fact: water is the cornerstone of human health and economic development. If managed poorly, water is an obstacle to development; if managed well, it brings prosperity and peace.

By IPS World Desk
With a growing global population, a rise in energy and industrial production, the demand for water is reaching new levels.

By Thalif Deen
As the world faces possible water scarcities in the next two to three decades, the U.S. intelligence community has already portrayed a grim scenario for the foreseeable future: ethnic conflicts, regional tensions, political instability and even mass killings.

By Busani Bafana
Small-scale irrigation schemes can provide the biggest opportunity for boosting food security in Africa, according to Meredith Giordano, the research director at the International Water Management Institute.

By Thalif Deen
Paradoxically, the water we "eat" is likely to become one of the growing new dangers to millions of the world’s thirsty, hungering for this finite natural resource.

By Thalif Deen
With the U.N. ominously warning of an impending food crisis following severe droughts in farmlands in the United States, Brazil, Russia and at least two rain-deprived states in India, the world will once again turn its attention to a finite natural resource: water.
ADVERTISEMENT ADVERTISEMENT