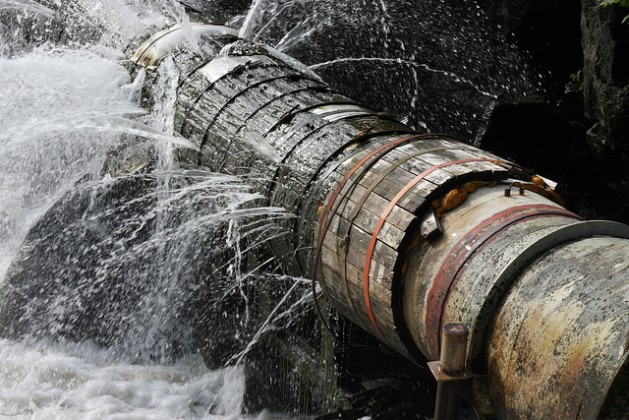 The conflict in Syria has destroyed much of the country’s water infrastructure, leaving five million people suffering from a critical water shortage. Credit: Bigstock

UNITED NATIONS, Aug 26 2015 (IPS) - Imagine having to venture out into a conflict zone in search of water because rebel groups and government forces have targeted the pipelines. Imagine walking miles in the blazing summer heat, then waiting hours at a public tap to fill up your containers. Now imagine realizing the jugs are too heavy to carry back home.

This scene, witnessed by an engineer with the United Nations Children’s Fund (UNICEF), is becoming all too common in embattled Syria. In this case, the child sent to fetch water was a little girl who simply sat down and cried when it became clear she wouldn’t be able to get the precious resource back to her family.

In an Aug. 26 press relief, UNICEF blasted parties to the conflict for deliberately targeting the water supply, adding that it has recorded 18 intentional water cuts in Aleppo in 2015 alone.

Such a move – banned under international law – is worsening the misery of millions of war-weary civilians, with an estimated five million people enduring the impacts of long interruptions to their water supply in the past few months.

“Clean water is both a basic need and a fundamental right, in Syria as it is anywhere else,” Peter Salama, UNICEF’s regional director for the Middle East and North Africa, said in a statement today. “Denying civilians access to water is a flagrant violation of the laws of war and must end.”

In some communities taps have remained dry for up to 17 consecutive days; in others, the dry spell has lasted over a month.

Often times the task of fetching water from collection points or public taps falls to children. It is not only exhausting work, but exceedingly dangerous in the conflict-ridden country. UNICEF says that three children have died in Aleppo in recent weeks while they were out in search of water.

In cities like Aleppo and Damascus, as well as the southwestern city of Dera’a, families are forced to consume water from unprotected and unregulated groundwater sources. Most likely contaminated, these sources put children at risk of water-borne diseases like typhoid and diarrhoea.

With supply running so low and demand for water increasing by the day, water prices have shot up – by 3,000 percent in places like Aleppo – making it even harder for families to secure this life-sustaining resource.

Ground fighting and air raids have laid waste much of the country’s water infrastructure, destroying pumping stations and severing pipelines at a time when municipal workers cannot get in to make necessary repairs.

To top it off, the all-too-frequent power cuts prevent technicians and engineers from pumping water into civilian areas.

UNICEF has trucked in water for over half-a-million people, 400,000 of them in Aleppo. The agency has also rehabilitated 94 wells serving 470,000 people and distributed 300,000 litres of fuel to beef up public water distribution systems in Aleppo and Damascus, where the shortage has impacted 2.3 million and 2.5 million people respectively. In Dera’a, a quarter of a million people are also enduring the cuts.

A 40-billion-dollar funding gap is preventing UNICEF from revving up its water, hygiene and sanitation operations around Syria. To tackle the crisis in Aleppo and Damascus alone the relief agency says it urgently needs 20 million dollars – a request that is unlikely to be met given the funding shortfall gripping humanitarian operations across the U.N. system.

Overall, water availability in Syria is about half what it was before 2011, when a massive protest movement against President Bashar al-Assad quickly turned into a violent insurrection that now involves over four separate armed groups including the Islamic State in Iraq and Syria (ISIS).

Well into its fifth year, the war shows no sign of abating.

As the U.N. marks World Water Week (Aug. 23-28) its eyes are on the warring parties in Syria who must be held accountable for using water to achieve their military and political goals.