STOCKHOLM, Aug 27 2012 (IPS) - Paradoxically, the water we “eat” is likely to become one of the growing new dangers to millions of the world’s thirsty, hungering for this finite natural resource.

“More than one-fourth of all the water we use worldwide is taken to grow over one billion tons of food that nobody eats,” Torgny Holmgren, executive director of the Stockholm International Water Institute (SIWI), told delegates during the opening of the annual international water conference, World Water Week, in the Swedish capital Monday. 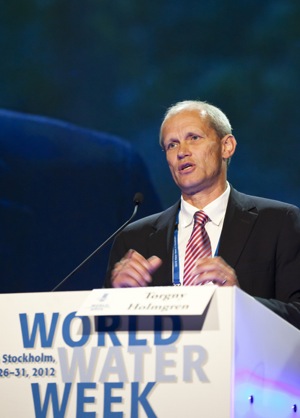 “That water, together with the billions of dollars spent to grow, ship, package and purchase the food, is sent down the drain,” he said.

“And reducing the waste of food is the smartest and most direct route to relieve pressure on water and land resources. It’s an opportunity we cannot afford to overlook,” he added.

The conference, one of the world’s largest single gathering of experts on water and sanitation, has drawn more than 2,000 delegates, including senior U.N. officials, scientists, academics, water activists and representatives of the business community, non-governmental organisations (NGOs) and the media, from over 100 countries.

Since everything humans eat requires water to be produced, the paradox of the water we “eat” was best illustrated by an exhibition in the conference lobby, which pointed out that the production of an average hamburger – two slices of bread, beef, tomato, lettuce, onions and cheese – consumes about 2,389 litres of water, compared to 140 litres for a cup of coffee and 135 for a single egg.

Addressing delegates Monday, Dr. Colin Chartres, director-general of the International Water Management Institute (IWMI), said feeding over 9 billion people by 2050 is possible, “but we have to reflect on the cost to the environment in terms of water withdrawals and land resources”.

Furthermore, it will put phenomenal pressure on the ecosystem services on which society depends.

Jose Graziano da Silva, director general of the Rome-based Food and Agriculture Organisation (FAO), said statistics show that agriculture is one of the largest consumers of water.

“But that also means that agriculture holds the key to sustainable water use,” he said, pointing out that investing in smallholder farmers is “critical to achieve food and water security for all people”.

Meanwhile a 50-page report by the Stockholm International Water Institute (SIWI) released here points out that nearly one billion people still suffer from hunger and malnutrition – despite the fact that food production has been steadily increasing on a per capita basis for decades.

Producing food to feed everyone well, including the two billion additional people expected to populate the planet by mid-century, a significant from today’s seven billion, will place greater pressure on available water and land resources.

Achieving food security, the report argues, is a complex challenge involving a host of factors. Two of the most critical have been identified as water and energy, both essential components to produce food.

Dr. Anders Jagerskog, lead editor of the report, said feeding everyone well is a primary challenge for this century. “Overeating, undernourishment and waste are all on the rise, and increased food production may face future constraints from water scarcity,” he said.

“We will need a new recipe to feed the world in the future,” he warned.