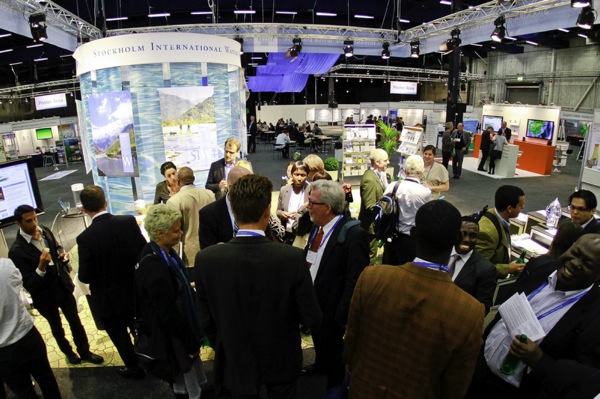 STOCKHOLM, Aug 28 2012 (IPS) - As the world faces possible water scarcities in the next two to three decades, the U.S. intelligence community has already portrayed a grim scenario for the foreseeable future: ethnic conflicts, regional tensions, political instability and even mass killings.

During the next 10 years, “many countries important to the United States will almost certainly experience water problems – shortages, poor water quality, or floods – that will contribute to the risk of instability and state failure, and increased regional tensions,” stated a National Intelligence Estimate released last March.

And in July, Chris Kojm, chairman of the National Intelligence Council, predicted that by 2030, nearly half of the world’s population (currently at more than 7 billion) will live in areas of severe water stress, increasing the likelihood of mass killings.

The New York Times quoted Timothy Snyder, a professor of history at Yale University, as saying at a recent symposium that an “ecological panic, I am afraid, will lead to mass killings in the decades to come”.

But Dr. Upmanu Lall, director of Columbia University’s Water Centre, has mixed feelings about potential conflicts over water, one of the world’s key natural resources necessary for survival.

“I am not sure I can project mass killings as a consequence (of water scarcities),” he told IPS.

And, he said, he does not expect transnational wars or conflicts over water either, “but I do expect that competition within some major countries such as India could lead to significant internal strife and the growth of terrorism and sectarian conflict”. However, “avoiding this future is feasible if we work to act on it today,” he added.

A future doomed to suffer intense water scarcities is one of several subjects under discussion at the weeklong international water conference, due to conclude Friday, in the Swedish capital.

Dr. Lall said the projection that nearly half the world’s population will live in “severe water stress” by 2030 under a business as usual scenario is quite realistic, even without climate factors being considered. “This is an urgent challenge, especially as we consider the prospect of mega-droughts – for example this year in the United States and in India.”

The impacts will be far flung and severe, he warned. However, “if we can translate this concern into action, especially on improvements in water use in agriculture, which is by far the largest and most inefficient consumer, then we could avert this disaster,” he said.

So far, there is talk in this direction but no global imperative to make targeted progress. “It is important that this be taken up at the highest levels to avoid considerable distress to the world’s population and economies,” Dr. Lall added.

“This will be particularly true in areas that are water stressed and there are large concentrations of poor populations.”

“However, I also believe that most governments will ultimately step up and put in place the right policies, regulations and transnational agreements needed to avert major conflicts.”

White pointed out that there will be many acute shortages that will take a significant human and economic toll but said he believed that “outright conflict will be the exception”.

In general, regional water crises unfold relatively slowly compared to most natural disasters and there will be lessons that are absorbed by those witnessing how significant the impact can be,  hopefully increasing their resolve to avoid similar impacts in their regions, he noted.

“But these crises and conflicts will disproportionately impact the poor because there are always options for more affluent populations to deploy technology to treat local water resources (even to the point of desalinating sea water) or transporting it through pipe systems across great distances – options that are prohibitively expensive for poorer populations,” he declared.

This statement, he pointed out, implies that the payment needed is consistent with the means of the individual.

Today, the poor actually pay more per unit of water than the rich – the payment may be in terms of money or in terms of labor invested in acquiring the water. Nor are they are assured a decent quality of water, he pointed out.

“Here, by the poor I refer to the economically disadvantaged in a particular society, and also to nations that are not as affluent.”

This reveals a stark reality that unless services are extended to such people, they suffer.

But to extend these services, one needs a model for cost recovery at the water system level, since the sources of reliable and safe water are rarely accessible to the full population, and have to be developed and maintained, Dr. Lall said.

The goal then has to be that the investment in these services needs to be funded as well as the financial ability to operate and maintain them.

Paying for the water also endows the user with a powerful right, the one to demand that she gets what she paid for, and this can work into improved governance through political pressure, he argued.

Where people have done this successfully, the service and the costs of water for the poor have dropped, and there has not been an increase in the cost of service to the rich.

“So, in summary, yes, everyone should pay a price for water, but consistent with their means, and by paying that price strengthen their right to access a reliable, high quality supply.”

This should be the articulation of the big water goal, instead of the declaration that it is a basic human right, he declared.