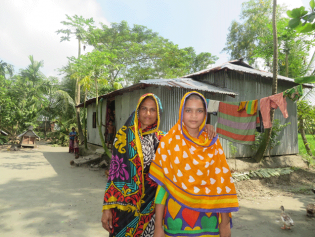 By Shahiduzzaman
History was made for 400 landless families in the remote char lands of Noakhali district. On 4th October, they all received land titles from the government for which they had waited for over two decades. In Bangladesh, as in other countries, the title is a permanent legal ownership document.

By Shahiduzzaman
She was born in the early 1950’s to an ultra-poor family in Kundihar, a remote village of Banaripara of Barisal division in Bangladesh. She was a beautiful baby and her father named her ‘Shahndah Rani’ which means ‘Queen of Evenings’. But in reality her life was far from that of a queen.

By Shahiduzzaman
Breaking all the social barriers and taboos, poor women in Bangladesh are now engaged in rural development works across the country as labourers.
ADVERTISEMENT ADVERTISEMENT