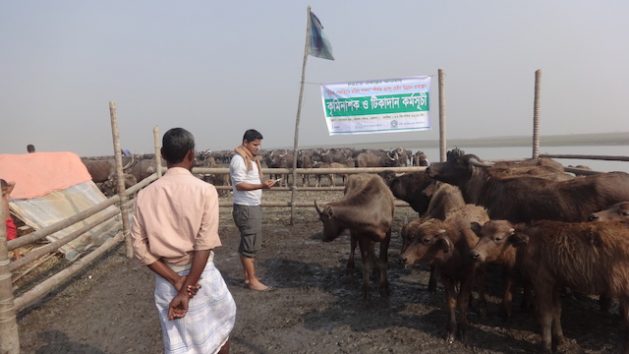 About 7,000 farmers are benefitting from this IFAD-supported project and the buffalo population has risen to more than 9,100 in the district. Credit: GJUS

BHOLA, Bangladesh, Aug 22 2017 (IPS) - Visitors might be confused after arriving in Char Chatkimarai, a tiny island of eight square miles situated in the extreme south of Bangladesh close to the Bay of Bengal. Many might think they have just landed in an amazing part of a big national park of buffalo.

It is an eye-catching sight to say the least. Whichever direction one looks, there are buffalo everywhere, moving together in herds and sometimes playfully running after each other or resting with their bodies submerged in water.

“Our income is slowly increasing and we can take care of our families better than before." --Hanif Hawlader

This buffalo island did not happen overnight. It is the poor people of this island who worked for decades to turn the place into buffalo land, building and rebuilding after floods, cyclones and tidal surges hit the island year after year.

The islands were inundated several times, including Char Chatkimarai, which was completely washed away and inhabitants of the island lost their loved ones and all their assets. But the people never gave up, rising every time to rebuild their lives and dreaming of a better future.

Each disaster that hit the people made them more determined to work harder. Their struggle for a better life attracted the attention of the International Fund for Agricultural Development (IFAD), a United Nations organisation that came up with a support programme for the island.

The government of Bangladesh welcomed IFAD’s initiative and agreed to work together to give the people of the island a fighting chance for a better life.

With IFAD support, Grameen Jano Unnayan Sangstha (GJUS), a local NGO, launched a four-year programme to provide modern technology for rearing buffalo in five sub-districts of Bhola, a southern district of the country. Ever since, the situation on the island started to improve.

About 7,000 farmers are benefitting from this IFAD-supported project and the buffalo population has risen to more than 9,100 in the district. The total buffalo population in the country is 1.464 million heads that are used for household subsistence farming as well as for extensive free range farming in the saline coastal region. Often buffalo are used as draft animals and partially for milk and meat production.

Zakir Hossain, Executive Director of GJUS, said, “Rearing buffalo is not profitable due to its high mortality rate, which is about 12 percent, and low productivity. But farmers keep buffalo in remote islands as they do not have any alternatives for survival.”

“Its products are healthier than other animals such as cow or goat,” Zakir added.

Mentioning the key activities undertaken with IFAD support on the island, Zakir said that training has been introduced for buffalo farmers to be able to adopt modern technology, keep up with continuous technical advice and health treatment services and introduce feed technology for high yielding bulls and artificial insemination technology.

As per the Bangladesh Bureau of Statistic (BBS) (2015-1016), the contribution of livestock to GDP is 1.66 to country’s GDP. Experts state that there are more options and opportunity to expand the sector.

Char Chatkimarai lies between two giant rivers: Tetulia and Meghna. The population of about 3,000 is ultra-poor and the literacy rate is very low. Girls and women’s lives are quite restricted. Most of them are victims of child or forced marriages.

Recently a team led by Benoit Thierry, Country Program Manager, Asia and the Pacific Division of IFAD traveled for over one and a half hours by small speed boat to reach Char Chatkimarai from Barisal division. Thierry met about 50 buffalo farmers and the people who live on this little island.

Nazim Hawlader, a 50-year-old farmer who is also a group leader, said, “Rearing buffalos was never profitable. Traditionally we have been rearing buffalos but had no treatment facilities when some buffalos had diseases. Now we have such services and this gives us new hope for survival.”

Nazim commended GJUS  for introducing modern technologies for rearing the animals, saying, “They have trained us, advised to take care of our animals in a scientific way and have provided treatment facilities.”

As a result, he said, the buffalo mortality rate has been reduced and the number of buffalo is increasing and they are producing more milk than before.

Hanif Hawlader, 55, another buffalo farmer, said, “Our income is slowly increasing and we can take care of our families better than before. Children are going to school, getting nutritious and healthy food and we also have sanitary toilets.”

He said that there is still a need for good feed at accessible cost and free fields for grazing.

Mohammad Majnu Sarkar, Assistant Manager of Palli Karma-Sahayak Foundation (PKSF), a government apex development organization, said, “We have given strong emphasis not only on Char Chatkimarai but also on the five sub-districts of Bhola and other adjacent districts where there is high potential for rearing buffalos.”

He added that the target is to reduce the buffalo mortality rate from 12 percent to 5 percent and continue transferring modern technology to improve herd health. Manju Sarker expressed confidence that most farmers will cross the poverty line and become self-sufficient within the next few years.

“At present buffalo milk, milk products and meat covers about 40 percent demand of Bhola district but it is gradually increasing after the project began. With such promising results, this project can be replicated in other parts of the country, particularly in the district adjacent to Bhola,” said veterinary doctor and Assistant Director of UJUS, Khalilur Rahman.

In addition, its fat content (6-8 percent) is usually 50-60 percent higher (or more) than cow’s milk. Buffalo milk has considerably higher energy value than cow’s milk because of its higher butter fat content. It is commercially more viable than cow milk for products such as butter, butter oil, soft and hard cheeses, condensed or evaporated milks, ice cream, yogurt and butter milk because of its lower water content and higher fat content.

Most significantly, the lower cholesterol value should make it more popular in a health conscious market. Also, buffalo meat is very tender and tasty and a healthy red meat substitute for beef. It is faster to cook, easier to digest, and has no allergenic effect.

The study, jointly conducted by a group of experts from Bangladesh Open University, SAARC Agriculture Centre, Sylhet Agricultural University, and the Biotechnology and Genetic Engineering Discipline of Khulna University also put forward a number of recommendations, including buffalo milk and meat market and infrastructure development and private investment to be explored and encouraged to invest in buffalo development in the country.

Deputy Commissioner of the District Mohammed Selim Uddin said the government is very supportive of the project. He said there are about 42 Char lands and each of these have excellent potential for rearing buffalos and cows.

Giving it high importance, the government is now planning to build several Mujib Kellah in the Char (island) region, where people and animals will stay safe during natural calamities like cyclone, floods or high tidal surges. Each Kellah will also have sweet water reserve instead of saline water for public use.

The project initiators are now planning to give a brand name for buffalo products, aiming to make them popular and market throughout the country.