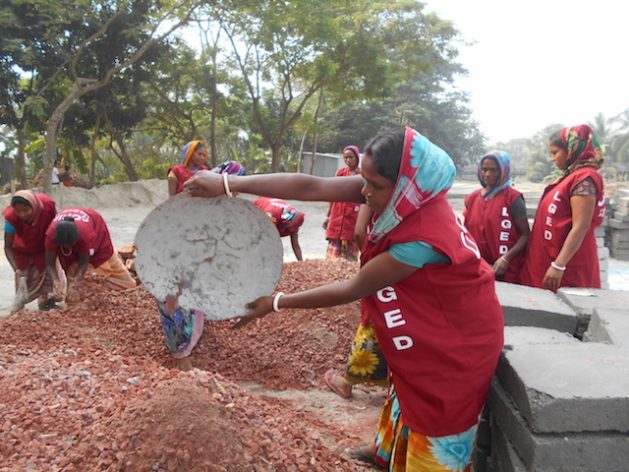 DHAKA, Aug 13 2017 (IPS) - Breaking all the social barriers and taboos, poor women in Bangladesh are now engaged in rural development works across the country as labourers.

The Local Government Engineering Department (LGED) of Bangladesh initiated the move in the early 1980s, a time when a section of the so-called local elite and influential people stood in their way to move forward.

The engineers of LGED walked a long way to make this happen. They brought the working women under a platform named ‘Labour Contracting Society’ or ‘LCS’. Most of the LCS members are poor women from local communities. The LGED in cooperation with the International Fund for Agricultural Development (IFAD) have been successful in formally shaping the LCS concept.

IFAD as an important development partner of Bangladesh, working with the government for the last four decades and supporting the country in alleviating poverty and strengthening the rural economy.

The participation of women in the LCS for rural development is on the rise and they are replacing formal business contractors who have no accountability once the work is done.

The LGED has laid out eligibility criteria for the LCS members, particularly for the women living within a 2-km radius of the work station to include those who are unemployed, divorced or separated from their husbands, widows, destitute, with physically challenged person/s in their families, those who do not have more than 0.5 acres of land, including the homestead, and who are adults and physically fit to take on construction work. There are also men in LCS but their numbers are insignificant.

These poor women have proven that they can build rural roads and markets, and maintain them in the long run better than the private contractors. They also own their own work as their community asset, which can never be expected from the business contractors.

IFAD is promoting the active participation of LCS members in most of their projects in the country, the Coastal Climate Resilient Infrastructure Project (CCRIP) being one of them. LGED considers CCRIP as a ‘Silver Bullet’ for eradicating rural poverty and unemployment.

CCRIP Project Director AKM Lutfur Rahman said apart from engineering aspects of infrastructure development, they consider its social aspects, too. “So, we call it ‘Social Engineering’, in a broader sense ‘engineering for poverty alleviation, education, irrigation, agriculture, women empowerment and tree plantation and so on’.”

LGED and IFAD are planning to further strengthen the LCS and diversify their effective involvement in the projects. As part of this, both the organisations recently supported a study conducted by Professor Sharmind Neelormi of the Economics Department of Jahangirnagar University, Bangladesh, on the LCS.

The study found that the concept of a ‘Labour Contracting Society’ is a proven successful formula for reaching out to the target groups and implementation of their work. Higher quality of work coupled with an increase in daily labour income and skill development form a strong base for further strengthening and expansion of this model.

Earlier this month, Professor Neelormi presented the key findings of the study at an LGED seminar in Dhaka. She put forward a set of recommendations to further improve the LCS. The key recommendations include ensuring gender-friendly working environment in project areas; revising the wage structure in the schedule considering seasonality, location-specific requirements and inflation adjustment; exercising the practice of ‘Force Majeure’ as contractual agreement; ensuring life and injury insurance during road maintenance and market construction works; and ensuring the use of retro-reflective vests.

LGED’s engineers and IFAD staff from its project areas, experts and representatives from other partners such as the World Food Programme (WFP), German KFW, Palli Karma-Sahayak Foundation (PKSF), and the Bangladesh Mahila Parishad (BMP)actively participated in the seminar.

Almost all the participants agreed with the study findings and the recommendations. Professor Sharmind drew attention of the project planners to the review some issues of LCS such as revising the wage structure to consider seasonality, location-specific requirements and inflation adjustment; and harmonisation of the daily wage rate and policy for profit-sharing across projects.

She said, “living in uncertain realities, no overnight change can be expected. Issues need to be challenged from the institution itself. It might not be possible for a local project implementing agency to ensure the safeguard.”

Jona Goswami of BMP said it is encouraging for rural women that job opportunities are created for them. She emphasised safety and security of female LCS members, saying they often become victims of violence, harassment and abuse either in their own houses or in workplaces. “So, the project authorities must ensure a gender-friendly working environment and they should be flexible about their personal issues,” Goswami said.

In an interview, Professor Md Shamsul Hoque of Bangladesh University of Engineering and Technology (BUET) commended the initiative, saying, “It has proved through all projects that the LCS approach of constructing minor infrastructure has not only increased the income of the poor women and men but also enhanced their technical and management skills. The concept of LCS can now easily be embraced in the country’s other development programmes as well as other developing nations.”

The POs are helping select the LCS members and provide financial services to them, which is an important tool for the members’ income sustainability, he said. “After receiving training, many LCS members have now turned into micro entrepreneurs and they are doing well.”

PKSF is an apex development organisation for sustainable poverty reduction through employment generation.
Rafiqul Islam suggested building up an effective linkage between LCS and POs for supporting the LCS members’ income-generating activities and building them as sustainable micro-entrepreneurs.