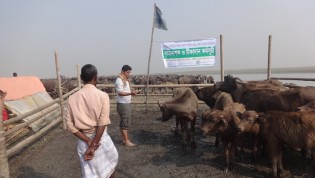 Awakening of the Soul

By IPS South Asia Desk
Amid festivity, Palli Karma-Sahayak Foundation (PKSF) yesterday showcased its experiences of the pilot phase of a programme on promoting sports and cultural activities among school children in the country.

By Naimul Haq
Jahanara Begum, a 35-year-old housewife, is surrounded by thatched-roof homes, all of which are partially submerged by floodwater.
ADVERTISEMENT ADVERTISEMENT