The PKSF and IPS signed a Memorandum of Understanding (MoU) in this regard at PKSF’s Dhaka Headquarters on Jan. 3.

Set up in 1990 by the Bangladesh government as a not-for-profit organisation, the PKSF now works with over 200 partner organisations (POs) across Bangladesh in all upazilas (sub-districts) of the country, serving over 10 million families (45-50 million people), with its people-focused, multidimensional integrated approach to poverty eradication and sustainable development.

According to PKSF Chairman Dr. Qazi Kholiquzzaman Ahmad, several countries and organisations are now showing interest in learning about the new PKSF approach as they meet their goals with success.

Credit, he says, is now provided from PKSF as part of a package that also includes skills training, access to technologies, and marketing assistance, as the PKSF made a retreat from its initial microcredit approach.

Having a life-cycle approach that starts with conception of a child and completing with old age,
intervening at all stages of life, the PKS model is drawing international attention.

Some African countries also want to replicate it, Kholiquzzaman says.

The key objectives the PKSF-IPS MoU are to build the capacity of journalists, including those in the IPS team, to analyse and report more effectively on the activities of PKSF carried out in accordance with its mandate, and enhance the capacity of women journalists, up to 60 annually, enabling them to report on gender-related issues as well as socio-economic aspects, including empowerment of women. 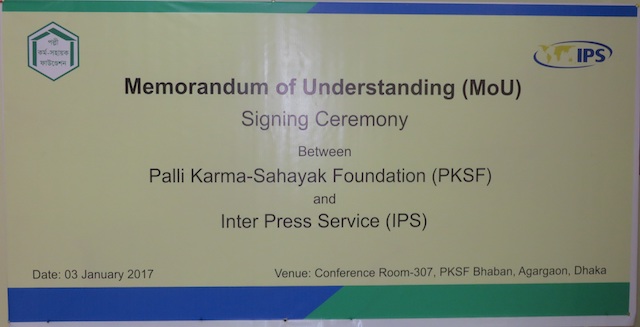 There are issues where journalists need to be well-informed to analyse, understand and file meaningful stories. Raising the level of understanding on issues like development and equality is critically important so that journalists can to do justice to their reports. Balanced reporting will only be possible when one can conceptualise and contextualize these.

When it comes to the issues relating to women and their development and empowerment, female journalists need to be encouraged to write about their own issues as they have clearer understanding of what’s most relevant to report. To make that happen, it is necessary to enhance their capacity as well through providing training.

Under the MoU, IPS will organise media field visits for firsthand news gathering and reporting. PKSF will facilitate rapid access to critical sources of information for timely news production.

Under the agreement, IPS will serve as PKSF’s international media partner at international, regional and national seminars and workshops.