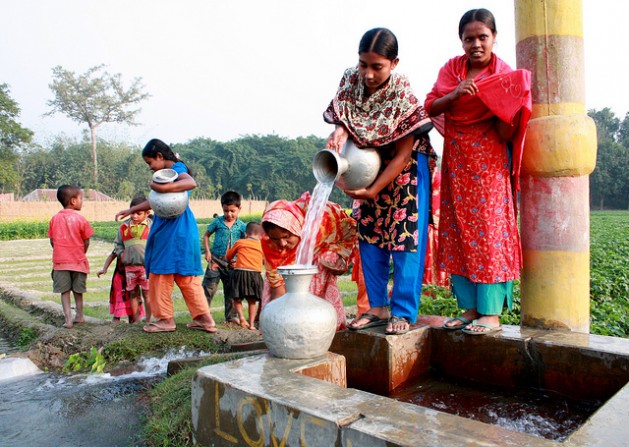 DHAKA, Dec 28 2016 (IPS) - Experts at Bangladesh’s National Water Convention 2016 in Dhaka urged the sustainable management and conservation of water as the country braces for a water crisis due to wastage, river pollution, declining groundwater tables and intrusion of salinity.

Bangladesh’s Water Resources Minister Anisul Islam Mahmud told the event there is no alternative to protecting the country’s water bodies and rivers to ensure sustainable management of water resources as envisaged in Sustainable Development Goal (SDG) 6.

A United Nations initiative, the SDGs are a set of 17 aspirational “Global Goals” with 169 targets relating to poverty and hunger, the environment and other core issues related to sustainable human development.

“We have many rivers and canals but all are being encroached on, limiting the water conservation scope…we must protect these water bodies to conserve water,” he told the inaugural session of the conference in the capital.

Minister Mahmud said Bangladesh receives huge amounts of water during the rainy season but 80 percent of it ultimately washes down into the Bay of Bengal, while 20 percent remains available for the rest of the year.

“If this water can be stored, Bangladesh is unlikely to face water scarcity during the dry season,” he said.

Mahmud noted that Bangladesh began investing in flood control and irrigation in the 1970s, and river management in the early 1980s, marking a retreat from its previous approach. “Now the extensive focus is there on river management,” he added.

About the prevailing water challenges, Mahmud said, “To meet our water demand, we’re extracting groundwater, triggering an arsenic problem here…but water availability and its management is very important. We’re polluting water every day because we’re not aware of it.”

According to documents provided at the workshop, some 36 million people are at risk of arsenic exposure in Bangladesh’s 61 districts with excessive arsenic-contaminated water.

Mahmud also said recurring floods and riverbank erosion and declining water flow in trans-boundary rivers cause a huge drop in the water level of the country’s drought-prone zones.

Addressing the event, PKSF chairman Prof. Dr Qazi Kholiquzzaman Ahmad said it is important for Bangladesh to focus on water management to achieve the SDGs as there is also a link between poverty and water availability.

Stressing the importance of having a coordinated water management policy in place, Dr. Kholiquzzaman said Bangladesh can best utilise its river routes as those are cheap for goods and passenger transportation.

The prominent economist said poor people are most affected when there is a water crisis as it decimates crops.

Depicting a dismal global scenario of water availability, he mentioned that the earth’s total water volume is about 1,386 cubic kilometres in diameter, of which only 2.5 percent is freshwater.

“But only 0.76 percent of the total water volume which is freshwater is useable since over 68 percent freshwater is locked up in ice and glaciers,” he added.

According to him, the per capita availability of water in Bangladesh is 7,568 cubic metres and just 150-200 cubic metres in its neighbouring countries.

“So the question may arise why Bangladesh faces a scarcity of water. It’s because the country has a plenty of water during monsoon, but a very little water during dry season,” he said.