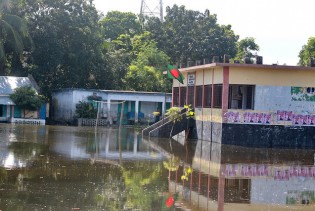 By Mahfuzur Rahman
Bangladesh is a disaster-prone country with floods hitting almost every year, leaving a trail of destruction despite having early warning systems. Now experts say it is time for the delta nation to think more seriously about how to deal with the recurring onslaughts of floods more effectively by strengthening its flood defence.

By Mahfuzur Rahman
Life for Bangladesh’s rural people, particularly in its remote north, is still miserable. Seasonal flooding, river erosion, and the low quality of rural infrastructure and lack of connectivity have made things harder for poor northerners.

By Mahfuzur Rahman
Breaking taboos surrounding menstruation, a project to distribute sanitary napkins to girls in one district of Bangladesh has had a positive impact on school dropout rates – and should be replicated in other parts of the country, experts say.

By Mahfuzur Rahman
Journalism is a profession that attracts both sexes, but social taboos and hostile office climates have kept the numbers of women working in Bangladesh’s media sector dismally low. Still, a new generation of women is stepping up, with the support of their path-breaking colleagues.

By Mahfuzur Rahman
Bangladesh, a country of 160 million people, has made significant progress in its efforts to accelerate economic growth, reduce poverty and promote social development, but it now faces certain challenges in consolidating these achievements and marching forward on the higher trajectory of development, says one of its leading economists.
ADVERTISEMENT ADVERTISEMENT