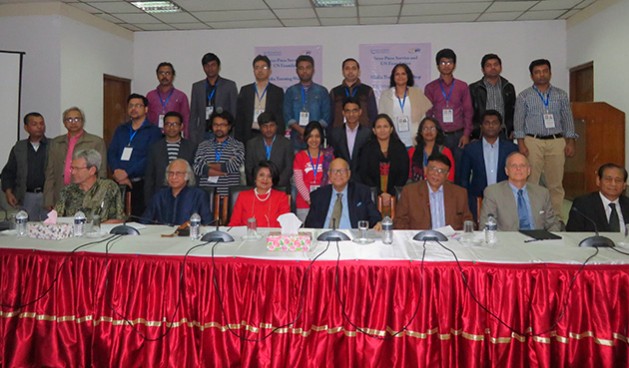 DHAKA, Dec 20 2016 (IPS) - Though highly hopeful about achieving the U.N.’s Sustainable Development Goals (SDGs) well ahead of the 2030 deadline, Bangladesh is upset over the procedures to access the Green Climate Fund, calling them ‘ridiculously complex’ and warning that they may slow down its drive to achieve the SDGs.

Bangladesh, one of the most vulnerable countries in the world to climate change, wants to emerge as a star performer in implementing the SDGs, repeating its success with the earlier Millennium Development Goals (MDGs). But officials say developed nations are not delivering funds to the affected countries as promised.

“The carbon emissions of developed countries are damaging the environment of smaller economies. They must ensure we’re provided enough funds to mitigate this damage.” --Finance Minister AMA Muhith

“The developed countries are mainly responsible for climate change. They’ve demonstrated goodwill in terms of financing climate change programmes all over the world, but Bangladesh is very unfortunate as it doesn’t get a fair share of it. The procedure of the Climate Change Fund is ridiculously complex,” said Bangladesh’s Finance Minister AMA Muhith.

Muhith was inaugurating a two-day media capacity building workshop titled ‘Reporting on the Sustainable Development Goals (SDGs)’ in Dhaka on Dec. 18. The United Nations Foundation and Inter Press Service (IPS) jointly organised the programme under the theme ‘Working Together: Why and how should the media report on the SDGs?’ Journalists from leading media outlets participated in the workshop.

According to Muhith, “The carbon emissions of developed countries are damaging the environment of smaller economies. They must ensure we’re provided enough funds to mitigate this damage.”

The Green Climate Fund was announced at the UN Climate Change Conference in Mexico in 2010. Developed nations pledged 100 billion dollars a year to assist developing countries in adaptation and mitigation to cope with the adverse impacts of climate change.

Referring to the growing adverse impacts of climate change on Bangladesh, a worried Muhith said many poor people in rural Bangladesh have lost everything due to riverbank erosion across the country.

“We’re spending our own money to tackle climate change’s negative impacts, but we don’t get the support we should get as one of the worst sufferers of climate change,” he said. 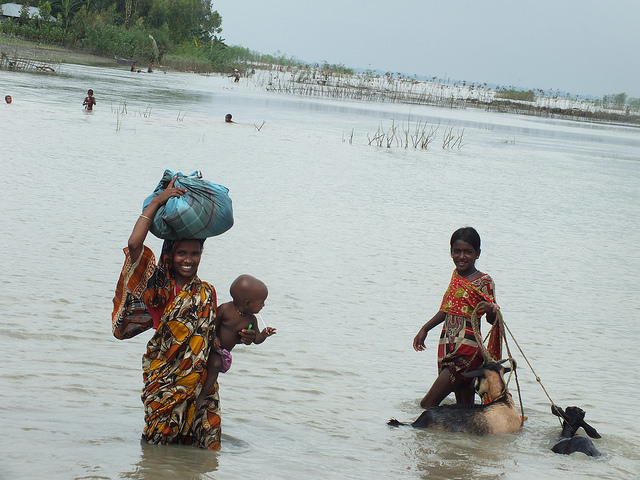 Families who live on ‘chars’ – river islands formed from sedimentation – are extremely vulnerable to natural disasters. This family wades through floodwaters left behind after heavy rains in August 2014 caused major rivers to burst their banks in northern Bangladesh. Credit: Naimul Haq/IPS

According to a report by the Dhaka Tribune, an English daily, Bangladesh is set to lose 50 million dollars from the Green Climate Fund “because of tension between the World Bank and donors, and lack of government commitment. Even as the government is scrambling to find funds for dealing with climate change impacts, donors have decided to pull the plug on the Bangladesh Climate Change Resilience Fund (BCCRF).”

Despite these obstacles, Muhith remains upbeat about Bangladesh’s march forward from the MDGs. He said Bangladesh will be able to achieve the SDGs well before the stipulated time of 2030.

“I personally think Bangladesh will certainly reach the targets well before 2030, although the procedure to initiate the development takes time,” he said.

Bangladesh’s initiatives to eradicate poverty aim to leave no one behind, said the country’s Finance Minister, adding that it would be quite possible for some other countries to reach the targets ahead of 2030 as well.

Bangladesh received a U.N. award for its remarkable achievements in attaining the Millennium Development Goals (MDGs), particularly in reducing the child mortality rate in 2010. It also received an FAO Achievement Award in 2015 for its success in fighting hunger, and a Women in Parliaments Global Forum Award, known as the WIP Award, in 2015 for its outstanding success in closing the gender gap in the political sphere.

Speaking at a high-profile discussion on ‘MDGS to SDGs: A Way Forward’, at UN Headquarters in New York on Sep. 30, on the sidelines of the 70th UN General Assembly, Prime Minister Sheikh Hasina said, “We’ll take the country forward by setting another example by implementing SDGs as Bangladesh did in the case of the MDGs. In this journey, no one will be left behind as we aspire to build Bangladesh as a progressive, peaceful and prosperous country.”

The adoption of the SDGs on Sep. 25, 2015 by the United Nations was a ‘unique show of global unity’ as it holds the promise to build a better world with the first-ever common development agenda.

The 17 SDGs envisage a sustainable future for all by engaging the entire world in collective efforts to end poverty, fight inequality, establish peace and tackle climate change.

“Bangladesh has become a role model in South Asia and in the world in achieving the MDGs, the predecessor of SDGs. We believe Bangladesh will again lead the way in achieving the SDGs,” Nagesh Kumar, head of UN-ESCAP South and South-West Asia Office, told a seminar at the Prime Minister’s Office in Dhaka on Aug. 17.