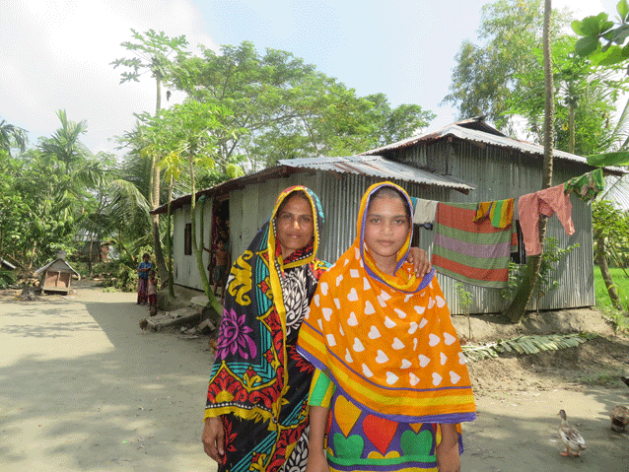 Akhter and her mother, Panna Begum, who saved her from being married off at the age of 13. Credit: Shahiduzzaman/IPS

DHAKA, Bangladesh, Oct 30 2017 (IPS) - The mother moved in like a tigress to save her cub. In 2015, when her 13-year-old daughter Shumi Akhter was about to be married off, Panna Begum pleaded with her husband, Dulal Mia, to cancel the marriage he’d arranged for their daughter.

Panna argued vehemently that Shumi was just a child and it was wrong for her to be married off at such a tender age. Dulal was adamant, countering that it was tradition and custom and his responsibility as a father to give his daughter away in marriage. He was furious with Panna for objecting, but she wouldn’t back down.

“I don’t agree with you because I know the reality, the legal age of girls’ marriage and consequences of child marriage. Please don’t try to kill the future of my daughter. If you proceed any further on this matter then I’m even ready to split from you to ensure my daughter’s future,” Panna warned her husband.

Panna never went to school and was herself a victim of child marriage. Fortunately, just a week before her daughter Shumi’s wedding, Panna participated in a sensitization meeting on women’s rights issues organized by Sagarika Samaj Unnayan Sangstha(SSUS), a local NGO. As soon as the meeting ended, she reached out for support from the participating NGO representatives and others to stop her daughter’s marriage. And she succeeded.

In the chars (accreted coastal land) of Noakhali district, where the Bangladesh government with the assistance of the International Fund for Agricultural Development (IFAD) and the Netherlands are implementing a project titled the Char Development and Settlement Project (CDSP IV), the story of Panna’s efforts and success in averting a disastrous child marriage is well known and widely appreciated. 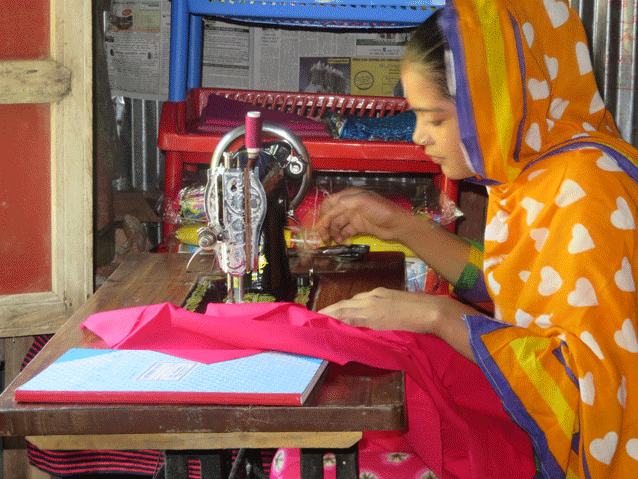 Sagarika Samaj Unnayan Sangstha (SSUS) is one of the four partner NGOs working with the CSDP IV to promote understanding of the social issues in the project areas. SSUS took responsibility to help the young Shumi learn skills that would eventually help her to earn money.

Within a couple of days following Panna’s appeal for help, the NGO admitted her into a CDSP IV month-long training on tailoring. She did well and she received a sewing machine free of cost. The training helped build her confidence. Within a short period Shumi became a popular tailor for the villages in the neighbourhood. Now she is earning between 50 and 70 dollars per month.

Her father Dulal Mia now says, “My decision was wrong. God saved us. I am sorry for causing such tension in my family. Like my wife, now I am also campaigning against child marriage.”

Today, at 16, Shumi is a major contributor to the family income. “I am dreaming of a better life. My parents and the villagers are with me. I will make my own decision about my future,” she stated confidently.

The other partners of CDSP IV are BRAC, Dwip Unnayan Songstha(DUS) and the Society for Development Initiatives (SDI).

Some 25 years ago, this correspondent visited the same char lands to report on the ‘Life of Char People’. At that time poor and marginal people who were victims of river erosion and natural disasters in various costal districts were trying to settle in this area. None of them aware of their basic rights, simply struggling for survival each day.

Those people were highly influenced in their outlook and were entrenched in taboos. Attitudes toward women and girl children were critically narrow. Over 95 percent of the girls were victims of child marriage. Women were strictly restricted in their movement outside their homes. They were bound by rules set by their husbands. In fact, the situation of women and girls was the worst in char areas compared to other parts of the country.

Then-local government officials and NGOs activists said low literacy rates and social insecurity of the families were the principal causes of the high rate of child marriage. Another important cause was that girls and young women in remote areas were vulnerable to sexual harassment and abuse. To avoid incidents of abuse and rape and to ensure safety and security of their daughters, parents took the initiative to give away girls in marriage as early as possible.

Those days are now in the past. Md. Hanan Mollah of SSUS said, “All credit goes to CDSP IV. It has broken the barrier and women are more socially secure and empowered, and their rights on assets have been established. They are now the major mainstream workforce in the area. Their contribution makes our rural economy vibrant.”

Although child marriage has been reduced drastically, many families continue the practice by producing fake birth certificates.

In fact, Bangladesh has many successes in social sectors, but sadly it has the fourth highest rate of child marriage in the world. According to UNICEF, “52 percent of country’s girls are married before the age of 18. Early marriage causes girls to drop out of education and limits their opportunities for social interaction.”

Human Rights Watch (HRW) recently reported that child marriage in Bangladesh is deeply destructive to the lives of married girls and their families; it pushes girls out of school, leaves them mired in poverty, heightens the risk of domestic violence, and carries grave health risks for girls and their babies due to early pregnancy.

Marriage of girls before the age of 18 and men before 21 is treated as child marriage, which is strictly prohibited by law in Bangladesh. It is a punishable offence for the organisers of child marriage including parents, registering entities and related persons.

“I can say confidently that child marriage in the area has reduced more than 90 percent after the CDSP IV project was launched. Often, when we receive information, our local officials including myself rush immediately to stop such marriages at any cost. A couple of months ago we intervened and stopped a child marriage when the couple were about to sign the marriage contract,” said Khondaka Rezauil Karim, Hatiya Upazila Nirbahi (sub-district Executive Officer).

“It is true some child marriages are still happening but within the next 12 months that will be stopped forever because by this time 100 percent birth registration will be completed, which is important for any marriage registrar to check the age of both male and female before registering the marriage.

“Several police camps and investigative centers and ground communication have been established in the areas to ensure peace and security. Now, police can rush within 30 minutes to any part of the chars to tackle the situation. Combating violence against women, promoting women’s empowerment and their rights based issues are our priority tasks,” Rezaul Karim said.

Deputy Team Leader of CDSPIV Md. Bazlul Karim said, “We have introduced multiple social programmes and support to stop child marriage effectively and promoting empowerment of women. ‘Legal and Human Rights’ programme is one of them, where an initiative has been taken to sensitize and raise awareness of the people by educating them on the country’s seven basic laws including Muslim and Hindu family laws, land law, inheritance law and constitutional rights. It also includes legal literacy classes, raising awareness about legal rights, and empowering the poor, especially women, both legally and socially by encouraging them to take legal action.”

“Around the project area, 984 groups are working on these issues. They are also acting like defenders on rights based issues. Now we are receiving complete information on the violation of rights and intolerance against women. And nothing is overlooked. So since the project started we were able to stop 93 child marriages,” he said.

The project is also providing life skill training and various kinds of support to young women, widows and destitute women. Tailoring training is one. So far the project has trained up 125 women and distributed 125 sewing machines free of cost. Each of the recipients are now earning a decent wage and helping their families. Credit is also being made available for small businesses, agro-based farming and livestock.

Achieving gender equality and empowerment of women are the most important goals of the project. Women’s position in their communities has improved remarkably. They are participating in all sorts of developing activities, including constructing roads, cultivating lands and agro-based farming.

The project officials and the NGO activists said that at the beginning it was very difficult to reach women. Their husbands were not cooperative at all, but with time they realized that empowering women only strengthened their own welfare.