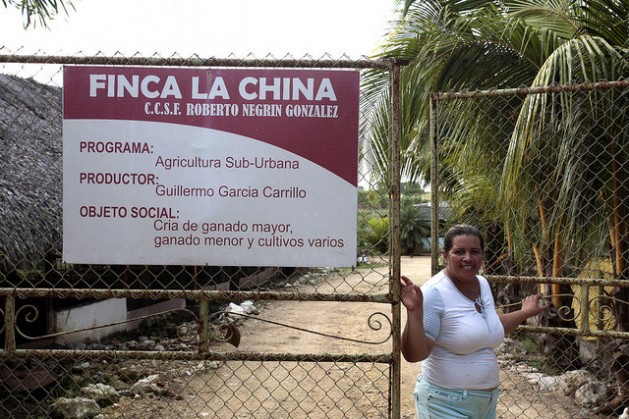 Hortensia Martínez, who along with her husband Guillermo García decided to dedicate herself to farming on the La China farm on the outskirts of Havana, after a long career as a mechanical engineer. Credit: Jorge Luis Baños/IPS

HAVANA, Aug 7 2014 (IPS) - Scattered houses amidst small fields of vegetables and other crops line the road to the La China farm on the outskirts of the Cuban capital. This is where Hortensia Martínez works – a mechanical engineer who has been called crazy by many for deciding to become a small farmer.

“Our story isn’t common,” Martínez, 48, told Tierramérica at the entrance to the six-hectare farm that was granted “in usufruct” to her husband Guillermo García in May 2009 in Punta Brava, in the municipality of La Lisa, a semi-urban suburb west of Havana.

Since Cuba adopted economic reforms in 2008, land has begun to be granted to people “in usufruct”, to stimulate agriculture.

From one edge of La China, scrubland can be seen stretching all the way to the horizon. In 2013, according to official figures, 1,046,100 of the 6,342,400 arable hectares in this Caribbean island nation were idle.

A scarcity of people not only interested in farming but who also have the skills and resources to produce more food is one of the hurdles to making headway towards the goal set as part of the broader economic reforms that put a priority on the agricultural sector in a country in dire need of boosting production and reducing food prices.

Among the factors standing in the way of improvements in agriculture are realities that are rarely talked about, such as the rural exodus decades ago, which left the Cuban countryside much emptier.

Of the country’s 11.2 million inhabitants, just 2.5 million now live in rural areas, according to 2013 data from the National Office of Statistics and Information (ONEI).

Although half of the rural population is female, women do not generally work the land themselves directly, due to a culture of sexism and machismo. To begin to change that, the authorities have stepped up strategies aimed at drawing more women into the rural workforce, although it is widely recognized that progress in that direction has been slow.

“My experience, from driving around the countryside for many years, has shown me that there is little social activity, and that life is full of limitations and unmet needs. With what they earn, farmers cannot cover their basic needs.” -- Agroecologist Fernando Funes-Monzote

The Cuban population is irreversibly ageing, and is doing so fast. It is estimated that by 2025, people over 60 will make up 30 percent of the population.

“The farm was a way to return to our roots,” said Martínez who, like his wife, comes from a farming family in Granma, 730 km east of Havana.

For decades, farmers proudly hung on their walls the university degrees earned by their children, who gained broad access to tuition-free education after the 1959 revolution.

But the newly educated generations migrated to the cities to work in their new professions.

And in the 1980s the idea was that it was cheaper to import food than to develop the agricultural sector, thanks to the subsidised trade with the now defunct Soviet Union. The collapse of the socialist bloc in 1989 tipped the Cuban economy over the edge, into a crisis that has dragged on to this day.

One of the results of the crisis was that professionals began to earn less than those who produced goods with their work.

“We joined the agricultural workforce to support our family,” Martínez said, explaining that both his and his wife’s nephews and nieces work on the farm with them.

“Now we eat healthier food and we are earning more money,” he said. The family raises rabbits, lambs, pigs and 18 species of birds. They also grow fruit and vegetables.

In La China, there is a large shed for rabbits, several corrals, and even a ‘ranchón’, the name given in Cuba to a traditional open-side palm-thatched wooden structure that serves as a social space, decorated with hanging flower pots.

But “we still don’t have a house here yet. I wish they would approve that,” lamented Martínez, who every day makes the five-km trek back and forth to the farm, where she leaves a guard on duty at night.

Decree-law 259, passed in 2008, stipulated that people could apply for idle land to farm in usufruct for an extendable period of 10 years. But it was not until 2012 that decree-law 300 was approved, allowing people to also build homes on the land.

“The red tape surrounding that is really bad,” Martínez complained.

Bureaucracy is a chronic problem in Cuba’s agricultural sector, which is tightly controlled by the state, even the portion that is in private hands.

During a Jul. 5 parliamentary session it was reported that the Agriculture Ministry staff and its provincial and municipal delegations were being cut 41 percent, as part of economic adjustments and an attempt to reduce bureaucracy.

Of the land farmed in Cuba today, 26.6 percent is in private hands, 21.7 percent has been granted in usufruct, and the rest is state-owned or belongs to cooperatives.

“It’s really hard to return to the countryside if you don’t have the know-how, skills and economic resources,” said 44-year-old Mireya Ramírez (no relation), who left her job in computers to take charge of the family farm when her father-in-law injured his hand.

Until five years ago, she told Tierramérica, she knew nothing about farming, even though she lived ever since she got married on the Los Solos farm in Campo Florida, another area on the outskirts of Havana.

“If the land is far away, you need transportation to get there,” she said. “Producing at some scale requires a significant investment of capital. For me it was hard to juggle the capital to diversify production, even though I received a farm that was already up and running.”

But “I finally have a level of liquidity that I never had before,” she said with a smile on her face.

The authorities also opened up lines of microcredit for farmers, and stores selling some farming tools and seeds, while increasing the prices paid by the government for agricultural products (farmers must sell a majority of their production to the state). In addition, tourist establishments are now allowed to directly purchase from farmers.

But farmers and experts told Tierramérica that the measures have fallen short.

“Policies must be broader and more generous, ranging from more credit for buying seeds and baby animals to facilities to rent or buy vehicles and buy houses, sheds, corrals and access roads to fields,” journalist Roberto Molina said in an interactive online conversation organised by Tierramérica in Cuba.

The faces of Cuba’s farmers vary depending on how far from the cities they are and the level of economic development of each province.

On the outskirts of the capital and in the western provinces like Mayabeque, Artemisa and Matanzas, there are prosperous farming families with cars and comfortable homes.

But in the mountains and other remote parts of the country many people live in bohíos – dirt-floored wooden shacks typical of poorer parts of the Cuban countryside – with pit latrines and no electricity or running water.

“My experience, from driving around the countryside for many years, has shown me that there is little social activity, and that life is full of limitations and unmet needs. With what they earn, farmers cannot cover their basic needs,” agroecologist Fernando Funes-Monzote told Tierrámerica.

The 43-year-old professional has also started running a farm with his family: the Finca Marta in Artemisa, the province adjacent to Havana.
This story was originally published by Latin American newspapers that are part of the Tierramérica network.