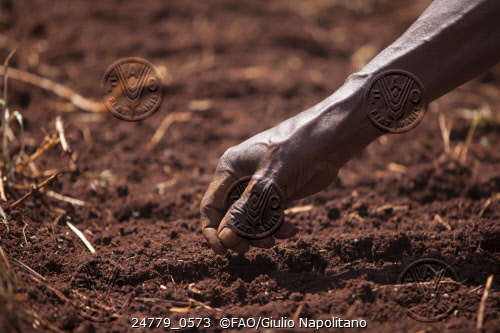 To meet the challenge of feeding the world’s 805 million hungry people, this year’s State of Food Insecurity report calls for the creation of an ‘enabling environment’. Credit: FAO/Giulio Napolitano

ROME, Sep 17 2014 (IPS) - The number of hungry people in the world has declined by over 100 million in the last decade and over 200 million since 1990-92, but 805 million people around the world still go hungry every day, according to the latest UN estimates.

Presenting their annual joint report on the State of Food Insecurity in the World, the Food and Agriculture Organization (FAO), international Fund for Agricultural Development (IFAD) and World Food Programme (WFP) said that while the latest hunger figures indicate that the Millennium Development Goal (MDG) of halving the proportion of undernourished people by 2015 is within reach, this will only be possible “if appropriate and immediate efforts are stepped up.”

These efforts include the necessary “political commitment … well informed by sound understanding of national challenges, relevant policy options, broad participation and lessons from other experiences.”

Introducing this year’s report, FAO Director-General Jose Graziano da Silva said that the figures indicate that a “world without hunger is possible in our lifetime.”

The three Rome-based UN agencies noted that while there has been significant progress overall, some regions are still lagging behind: sub-Saharan Africa, where more than one in four people remain chronically undernourished, and Asia, where the majority of the world’s hungry – 520 million people – live.

In Oceania there has been a modest improvement in percentage terms (down 1.7 percent from 14 percent two years ago) but an increase in the number of hungry people. Latin America and the Caribbean have made most progress in increasing food security.

However, WFP Executive Director Ertharin Cousin warned that “we cannot celebrate yet because we must still reach 805 million people without enough food for a healthy and productive life.”

Calling for what they called an ‘enabling environment’, the agencies stressed that “food insecurity and malnutrition are complex problems that cannot be solved by one sector or stakeholder alone, but need to be tackled in a coordinated way.” In this regard, they called on governments to work closely with the private sector and civil society.

According to the report, the ‘enabling environment’ should be based on an integrated approach that includes public and private investments to increase agricultural productivity; access to land, services, technologies and markets; and measures to promote rural development and social protection for the most vulnerable, including strengthening their resilience to conflicts and natural disasters.

Speaking at the presentation of the report, the WFP Executive Director referred in particular to the current outbreak of Ebola in the West African countries of Sierra Leone, Liberia and Guinea which, she said, “is an unprecedented health emergency which is rapidly becoming a major food crisis.”

“You cannot isolate people without addressing the food and nutrition challenges of those who need assistance,” she added, noting that the populations in these countries are not harvesting or planting according to their regular seasonal requirements while the crisis rages.

“This is rapidly becoming a food crisis that is potentially affecting 1.3 million people today, with an unknown number of how many will be affected in the future.”

“We cannot let the unprecedented level of humanitarian crisis undermine our efforts to progress even further, to reach our planet’s most vulnerable people and to end hunger in our lifetimes.”

The State of Food Insecurity report will be part of discussions at the Second International Conference on Nutrition to be held in Rome from 19-21 November, jointly organised by FAO and the World Health Organization (WHO).

This high-level intergovernmental meeting will seek a renewed political commitment at global level to combat malnutrition with the overall goal of improving diets and raising nutrition levels.