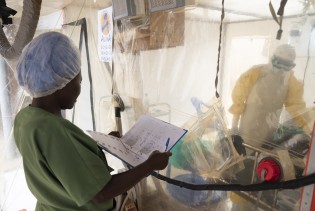 By Valentina Ieri
The international humanitarian charity Oxfam is calling on the World Bank and major donors to raise 1.7 billion dollars to improve poor health systems in Ebola-affected countries and strengthen community networks for preventing another epidemic.

By Josh Butler
Nine million children live in areas affected by the Ebola outbreak in West Africa, while thousands have lost parents to the virus, according to a new report from The United Nations Children's Fund (UNICEF).

By Valentina Ieri
Recommendations on how to eradicate Ebola and avoid future outbreaks were released in a report on Tuesday by the International Rescue Committee (IRC).

By Tim Brewer
The Ebola crisis has thrown into sharp relief the issue of water, sanitation and hygiene in treating and caring for the sick. Dying patients are being taken to hospitals which never had enough water to maintain hygiene, and the epidemic has pushed the system to the breaking point.
Next Page »
ADVERTISEMENT ADVERTISEMENT