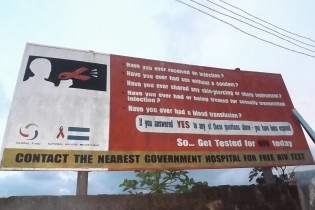 By Lansana Fofana
The crusade against corruption seems to be gathering momentum in this West African country, with the arrest and prosecution of senior government officials, including cabinet ministers.

By Lansana Fofana
Former child soldier Komba Gbondo maimed and killed many people from his hometown, and the 25-year-old is still too terrified to return.

By Lansana Fofana
Ismail Conteh has been teaching for the past year-and-a-half at a primary school in Sierra Leone’s capital Freetown – without receiving a single cent. He is one of hundreds of teachers recruited by schools to match the ever-growing number of pupils.

By Lansana Fofana
Sierra Leone’s parliament has come under serious scrutiny by opposition legislators, civil society and members of the public for ‘breaching procedures’ and ‘undermining the constitution’.

By Lansana Fofana
A new police force plan to recruit youths in each community, to help fight the country-wide spate of armed robbery, has provoked controversy and sparked a nationwide debate.

By Lansana Fofana
The country’s president has failed to meet his electoral commitment of running a transparent and accountable government, free of tribalism and regionalism, opposition parties say.

By Lansana Fofana
It may be seven years after the country’s civil war, but Sierra Leone is still battling to obtain an independent judiciary.

By Lansana Fofana
Government’s refusal to pay the salaries of thousands teachers, while looking to recruit thousands more, has plunged the schooling system into crisis.

By Lansana Fofana
Two Sierra Leonean radio stations have been stripped of their licences. The national regulatory body, the Independent Media Commission (IMC), says the stations failed to comply with the country's media code.

By Lansana Fofana
Incitement and violent clashes continue to shackle the government of Sierra Leone that took office two years ago. The elections were marred by reports of assassination attempts; violent confrontations between party militants; burning and looting; and widespread intimidation of voters.

By Lansana Fofana
Since the end of the civil war seven years ago, the Sierra Leonean authorities and child welfare agencies have been battling to remove children from the diamond-mining fields, a trend which began at the height of the conflict, when children were abducted by rebel forces and coerced to work in the mines.

By Lansana Fofana
On Apr. 8, the UN-backed Special Court for Sierra Leone passed sentences on three former commanders of the Revolutionary United Front (RUF), bringing to an end the trials of militia leaders deemed responsible for atrocities committed during the country's bloody civil war, fought from 1991 to 2002.

By Lansana Fofana
The first West African conference of the African Socialist International has ended in Freetown, with delegates calling for reparations to be paid to Africans for 400 years of slavery.

By Lansana Fofana
Each morning, Mariama Kamara and her two teenaged sons walk to Freetown’s main rubbish dump. Their mission: to dig through the mounds of garbage in search of scrap metal.

By Lansana Fofana
Her reputation as a fiery orator is enhanced whenever she takes the podium, her punch softened by her broad smiles and gorgeous attires in West African style.

By Lansana Fofana
Magnus Kamara is a school inspector with a difference. He has been hired to find schools that don't exist.
Next Page »
ADVERTISEMENT ADVERTISEMENT