FREETOWN, Apr 28 2009 (IPS) - On Apr. 8, the UN-backed Special Court for Sierra Leone passed sentences on three former commanders of the Revolutionary United Front (RUF), bringing to an end the trials of militia leaders deemed responsible for atrocities committed during the country’s bloody civil war, fought from 1991 to 2002. 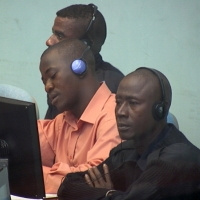 Issa Sesay, the interim leader of the RUF after the death of its founder Foday Sankoh, field commander Morris Kallon and chief of security Augustine Gbao were found guilty of war crimes, crimes against humanity and serious violations of international humanitarian law. The three were slammed with a total of 117 years in prison.

In 2008, members of the two other factions involved in the conflict were tried on similar charges. Three leaders of the Armed Forces Revolutionary Council (AFRC) and two from the pro-government Civil Defence Force (CDF) were all found guilty and sentenced to lengthy jail terms.

The court was established in 2003, following an agreement between the government of Sierra Leone and the United Nations, to try “those bearing the greatest responsibility” for horrific crimes committed during the conflict.These crimes included murder, rape, sexual enslavement, conscription of children into armed groups, amputations and burning and looting.

“The people of Sierra Leone can now move forward with their lives and put behind them this dark chapter. They now feel a sense of justice and those who think they can get away with impunity must think twice,” commented Herman von Habel, the registrar of the Special Court.

The court may have sent the war criminals to jail but for their victims, the agony still remains.

Fatmata Kamara, had both her legs chopped off by rebel fighters when they invaded the capital Freetown, in January 1999. Ten years after that ghastly incident, she has been permanently condemned to begging for alms on the city’s streets. She is supported by her two children, aged 16 and 14, who push her in a wheel chair. Before her amputation, she was a hair-dresser and owned a salon downtown.

“I still remember that fateful day when RUF fighters invaded Kissy [an eastern suburb of the city] and slashed my two legs using blunt matchetes and axes. It was a painful and traumatic experience. To date, I still feel the recurring pain and agony,” Kamara told IPS.

She is one of hundreds who suffered mutilation of body parts. Thousands more lost their lives and property.

At the end of the war, a Truth and Reconciliation Commission [TRC] was set up to document a proper historic record of the war, why and how it happened and how to prevent its re-occurrence.

The commission recommended national reconciliation and war victims were encouraged to forgive the perpetrators.

However, even after the handing down of sentences, many victims are still bitter. They claim that the ex-combatants have been rehabilitated and given skills training and cash incentives as part of the reconciliation process, while they the victims have been left on their own, languishing in abject poverty.

“I can forgive but not forget. The scars are all over me – an amputated arm and lacerations on my body. And, when I see those who did this to me, moving freely about, my heart races back and I feel even bitter,” Jabati Mambu, who plays soccer for the National Amputee team as a way of rebuilding his life, told IPS.

He thinks the sentencing of eight militia commanders, is not enough to restore the dignity of victims, or even make them feel justice. Thousands of ex-combatants roam the streets, with some having been integrated into the national security services. The victims are living as destitutes.

Mambu rants: “It makes no sense to me spending millions of US dollars on the prosecution of eight men, at the Special Court, while we the victims live in squalor. This is unfair.”

The court’s success at ending impunity and preventing a slip into anarchy, has been strongly challenged by analysts here. The historical conditions that triggered the conflict, in the first place, are very much prevalent today: mass poverty, youth unemployment, regional and tribal divide and pervasive corruption.

Political commentator Joseph Taylor says the fundamental causes of social unrest must first be addressed. “I think the authorities have to improve on governance, end corruption, provide jobs for the youths and deliver social services if we are not to once again revert to conflict.”

Another contentious issue has been the question of where the convicted war criminals will serve their sentences. Both the Sierra Leonean authorities and their counterparts in the Special Court, say the country’s prisons do not meet the requisite international standards, to keep the convicts. The special court has therefore concluded an agreement with Rwanda to take the prisoners, but the convicts and their counsels insist this is unacceptable.

The defence team for the RUF prisoners says it will appeal this at the appeals chamber of the special court. Its argument is that this would violate the rights of its clients and isolate them from meeting their families, friends and loved ones.

With the trials of the ex-Sierra Leonean militia commanders closed, the Special Court now has only one major case that it is dealing with, that of the former Liberian President, Charles Taylor.

Mr Taylor is facing an 11-count indictment, for war crimes and crimes against humanity, at the Hague. His trial was moved from Sierra Leone because it was feared such an exercise would plunge the region into further chaos and war.

The ex-Liberian leader is accused of having provided military support, for RUF rebels fighting in Sierra Leone, in exchange for diamonds. Taylor has denied the charges.

The mandate of the court ends in 2010, but it has since been complaining of a shortfall in its budget, to continue the Taylor trial. Its registry announced recently it has secured some funding from contributing countries that would keep it going till end of June, but that more is still needed.