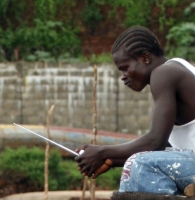 Turning down the volume: rival radio stations have been blamed for fanning political tensions with inflammatory broadcasts. Credit: Tugela Ridley/IRIN

The IMC announced the withdrawal of the licenses of Radio Unity which belongs to the opposition Sierra Leone People’s Party (SLPP), and Radio Rising Sun, owned by the ruling All People’s Congress (APC) on Jul. 7.

A statement from the media regulator reads: “Notwithstanding the provisions of the Media Code of Practice and the IMC Act relevant to the suspension of radio stations, and despite efforts by the Commission to get the two political radio stations to comply with the media code, without success, the Commission is regrettably left with no option but to withdraw their licenses with immediate effect.”

The banning of the two radio stations follows their suspension in March by the country’s vice president, Samuel Sam Sumana, after a series of politically-motivated clashes between militants of the two parties that resulted in many injuries and destruction of property.

Sumana’s action received widespread condemnation, not only from the opposition but also from the Sierra Leone Association of Journalists (SLAJ) and rights monitors.

The journalists’ association SLAJ is locked in a bitter stand-off with the judiciary and the central government, over the repeal of obnoxious laws that restrict press freedom.

The 1965 Public Order Act criminalises libel and has seen many media practitioners sent to jail, over the years. SLAJ, after failing to get the authorities to repeal it, has imposed a news blackout on the judiciary for what it says is the failure by the country’s supreme court to give ruling in an action brought before it, by the association. SLAJ, on Jul. 13, sent protest letters to the president, the speaker of parliament and the ombudsman urging them to step in and get the laws expunged from the statutes.

It has also extended its news blackout on the police which refused to grant it permission to process through the streets of Freetown on Monday, as well as the Ministry of Information, which it accuses of not doing much to help resolve the matter.


Only the IMC has the power to ban any radio station or newspaper. It was largely seen as a political decision.

Both stations were established in the run-up to the 2007 general and presidential elections. However, since the elections, the political party mouthpieces are seen by many to have broadcast inflammatory information which has triggered political clashes.

For instance, just before they were suspended, Rising Sun broadcast messages claiming the SLPP had mobilised former militia fighters at its Freetown office to unleash terror on city residents. The outcome of that broadcast was an attack on the SLPP office where people got injured and property destroyed.

Incidents like these explain why their ban is welcome among many people here.

“These were hate radio stations that were simply fanning the flames of tribalism, sectionalism and disunity in the country. They were pushing the country to the brink of another conflict which this country can ill-afford,” comments Michael George, a political analyst in the capital.

A truce between the groups of militants was brokered in April by the United Nations Peace-building Office. But the sanctioning of the radio stations now threatens to inflame an atmosphere that is still politically charged.

The president of SLAJ, Umaru Fofana, has condemned the ban, describing it as “lacking any moral justification.”

Fofana has resigned from the IMC’s Policy Committee in protest. “This ban is incompatible with my principle and belief in media pluralism and a free press,” he says.

It is curious to see that the journalists’ association is split on the ban on the two political radio stations. Officially, SLAJ is opposed to the ban, but some members say it was a wise decision by the IMC and support the move.

David Tam-Baryoh, a newspaper commentator and former publisher who is a member of SLAJ says the two stations had failed to comply with the media code of ethics and were grossly unprofessional.

“I have been a strong advocate of media freedom and pluralism but I think the two political radio stations had taken this too far. Their broadcasts were highly inflammatory and given that this country has just emerged from a brutal civil conflict, their existence would only plunge us into anarchy.”

The opposition SLPP, however, is more disturbed by the ban. Radio Unity had been very vocal in challenging policies of the ruling APC. Radio Unity repeatedly pointed out the ruling party’s failures and naming and shaming ministers and government officials it considered under-performers, much to the annoyance of the APC government.

Jacob Jusu Saffa, the secretary general of the SLPP, told IPS his party is contemplating taking legal action against the IMC seeking to overturn its decision.

“The IMC is only independent in name. It is acting on the orders of the ruling APC and is helping the ruling regime to stifle free speech and pluralism of the media. We in the SLPP consider this unacceptable and so we are going to court to challenge this action,” Saffa told IPS in Freetown.

As for the ruling APC party, its officials have remained largely silent. This is understandable because it has little to lose if the two stations are off air. After all, it controls the state-owned Sierra Leone Broadcasting Service and enjoys more air time than the opposition.

Frank Kargbo, the assistant national publicity secretary of the APC, says his party respects the decision of the IMC. “The IMC is the official media regulatory body and so if it decides to shut down the two political radio stations, we (APC) can only respect their decision because we believe they have done so in the interest of peace and national stability.”

The minister of information and communication, Ibrahim Ben Kargbo, denies the government is behind the ban imposed on the two political party radios.

“Our government believes in the freedom of the press. We have not thrown any journalist in jail, for publishing or airing his or her views, since we assumed office nearly two years ago, so for anyone to suggest that the government is behind the ban is totally untrue. At the same time, we respect the decision of the IMC, which is an independent body.”

While the IMC continues to endure the condemnation of media watchers and rights activists in the country, with some accusing it of collusion with the ruling party, Sierra Leoneans are waiting to see if the opposition SLPP will carry out its threat of going to court.