FREETOWN, Dec 18 2009 (IPS) - A new police force plan to recruit youths in each community, to help fight the country-wide spate of armed robbery, has provoked controversy and sparked a nationwide debate. 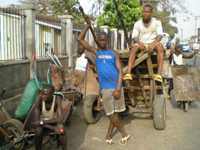 Communities are concerned that some area volunteers are known to be ex-child combatants, who may have participated in committing horrific atrocities against civilians.

“Some of the youths may have despicable records, but (still) manage to make it into the volunteer force. My worry is that they may end up tormenting members of the community they are supposed to protect, by engaging in mobile phone and purse snatching, mugging and other petty crime,” opines Margaret Sandi, a Freetown housewife and recent mugging victim.

But even these ex-child combatants are as desperate as the more than one million youths roaming the streets in search of jobs.

This is not the first time that the authorities have resorted to recruiting youthful volunteers to help state security forces. At the height of the civil war, in the 90s, youths were recruited to form “civil defence forces” throughout the country.

Their mandate was to help the regular forces contain the rebels. Many of these ended up harassing and looting the neighbourhoods. Some even surrendered their loyalty to the rebels, who were gaining control of territory and resources.

Acting police chief, Morie Lengor, told IPS there was an urgent need for this recruitment drive.

“These youths know their communities very well. They would not be considered police officers, but simply community volunteers who help the police identify and arrest criminals and armed robbers.”

Lengor said the criteria for recruitment were: a volunteer must be above 18; residing in the community; not have a criminal record and not be an alcoholic or drug addict.

The rules, according to the police chief, prohibit any volunteer from extortion or bribe-taking or impersonating the police. They can make arrests only in co-operation with the police, and may not carry offensive weapons.

Lengor said they would not be paid monthly wages, but receive stipends and other logistical support to help them carry out their job. They would also be supplied with white T-shirts to distinguish them from the blue uniform of the police.

The exercise will start in Freetown, the capital, which has already been partitioned into 860 zones, with 10 community volunteers manning each zone.

“Already hundreds of unemployed youths in the communities have been offering themselves for recruitment, and we have set up community safety committees composed of elders to help us identify suitable candidates.”

Armed robbery has increased sharply in cities and towns across the country in the past few months. Scores of people, including foreign investors, have been killed and property and money valued at tens of thousands of US dollars stolen.

This has caused people to lose confidence in the police, many residents accusing them of complicity in robbery.

These fears were increased by the arrest of two senior police officers on suspicion of colluding with robbers. They were named by robbery suspects as providing them with weapons. The robbers and the officers are now on trial in Freetown.

“I don’t trust the police to deal with the problem of armed robbery,” says robbery victim Michael Cole. “My home was robbed at gunpoint. We called the police, who are few metres away from our west Freetown residence, but they told us they had no vehicles and were short of manpower. It is a tragedy here.”

This view is shared by many residents of the capital and the provincial cities. They claim wherever there is a reported case of armed robbery victims often say they saw the robbers in police uniforms and bearing arms.

The police claim they do not have enough personnel and the logistical capacity to deal with the upsurge in crime.

With 10 youths manning each zone, the police would end up recruiting close to 9,000 volunteer youths for Freetown alone – almost as many as in the entire police force. There are also questions about the duplication of police functions.

But Lengor told IPS this was in no way abdicating police responsibility. “We are not relinquishing our constitutional responsibilities. Rather, we believe this initiative will make our work easier. We would be recruiting the most suitable youths, who are disciplined and patriotic,” Lengor maintains.

The opposition claims the government is using the recruitment of youths partly as a political gesture to win elections.

Comments Jacob Jusu Saffa, secretary-general of the main opposition Sierra Leone People’s Party: “The Ruling All Peoples Congress party is recruiting these youths in order to position itself for the 2012 elections.

“They give the impression jobs are been created for the youths, but we see this as the government failing in its duty to provide security for the people.”

Civil society has also voiced concern. John Caulker, of the rights monitoring group Forum of Conscience, told IPS: “The authorities must be careful in the way they go about recruiting these youths.

“We must not in the quest for job creation rush into recruiting youths who have questionable backgrounds. I think the police must be adequately empowered to carry out their duties.”

The police force has benefited immensely by support from the British Department for International Development in its restructuring. Officers have been given advanced training, had barracks refurbished and received vehicles and logistical help.

But there is a lot more to be done before the Sierra Leonean police force gets on top of the situation, and tackles the twin problems of crime and violence in the impoverished west African state.