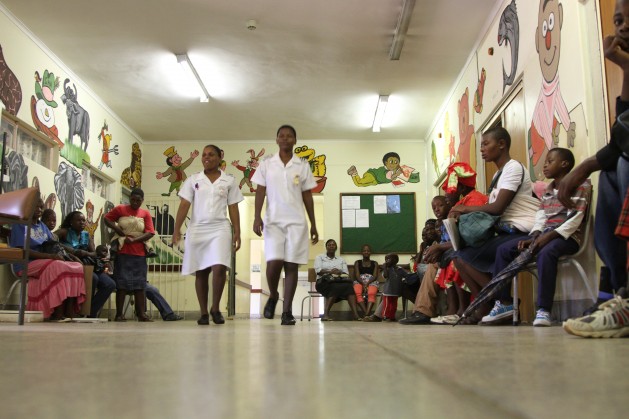 HARARE, Feb 13 2015 (IPS) - Hidden by the struggles to defeat Ebola, malaria and drug-resistant tuberculosis, a silent killer has been moving across the African continent, superseding infections of HIV and AIDS.

World Cancer Day commemorated on Feb. 4 may have come and gone, but the spread of cancer in Africa has been worrying global health organisations and experts year round. The continent, they fear, is ill-prepared for another health crisis of enormous proportions.

By 2020, according to the World Health Organisation (WHO), approximately 16 million new cases of cancer are anticipated worldwide, with 70 percent of them in developing countries. Africa and Asia are not spared.

“Africa is at a crossroads in the face of rising cancer cases, with the disease proving to be more deadly than HIV/AIDS and it is worsening at a time when the continent faces a serious shortage of cancer specialists,” Menzisi Thabane, private oncologist in South Africa’s Eastern Cape Province

“Africa is at a crossroads in the face of rising cancer cases, with the disease proving to be more deadly than HIV/AIDS and it is worsening at a time when the continent faces a serious shortage of cancer specialists,” Menzisi Thabane, a private oncologist in South Africa’s Eastern Cape Province, told IPS.

“Africa and its leaders have failed to recognise cancer as a high-priority health problem despite millions of people succumbing to the disease,” added Thabane.

Most of Africa’s 2,000 plus languages have no word for cancer. The common perception in both developing and developed countries is that it is a disease of the wealthy world, where high-fat, processed-food diets, alcohol, smoking and sedentary lifestyles fuel tumour growth.

While many cancers are linked to unhealthy diets and smoking, a large number – particularly in Africa – are caused by infections like hepatitis B and C which can lead to liver cancer and the human papillomavirus (HPV) that causes almost all cervical cancers.

An HPV vaccine treatment costs 350 dollars for three doses over six months in most sub-Saharan African countries, whereas in Zimbabwe radiotherapy costs between 3,000 and 4,000 dollars for a whole session.

According to Zimbabwe’s Ministry of Health and Child Care, the country only has four oncologists catering to over 7,000 cancer patients nationwide. “The shortage of cancer doctors stands as an impediment to comprehensive treatment and care for cancer patients here,” Dr Prosper Chonzi, director of Health Services in the Zimbabwean capital, Harare, told IPS.

The shortage of cancer specialists is also seen in West Africa.

Across the continent in Kenya, cancer accounts for approximately 18,000 deaths annually, with up to 60 percent of fatalities occurring among people who are in the most productive years of their life. Men are most commonly diagnosed with prostate or oesophageal cancer, and women are most frequently affected by breast and cervical cancer.

Melody Hamandishe, a retired government nutritionist, told IPS she blamed imported genetically modified foods. This contributes to cancer, she said, as does the abuse of alcohol, often causing liver cancer.

In Zambia, anti-cancer activists accuse the government of not prioritising the fight against the disease. “People are perishing in huge numbers because of cancer here in Zambia while government is seized with fighting HIV/AIDS,” Kitana Phiri, a cervical cancer survivor, now a devoted anti-cancer activist based in the Zambian capital, Lusaka, told IPS.

In Tanzania, cancer is also wreaking havoc. A January 2014 report by the Ocean Road Cancer Institute (ORCI), the only specialised facility for cancer treatment in this east African nation, said there are 100 new patients in every 100,000 population out of the country’s population of 45 million.

Finally, in Namibia, uranium workers were reported to have elevated rates of cancers and other illnesses after working in one of Africa’s largest mines.

Rio Tinto’s Rössing uranium mine extracts millions of tonnes of rock a year for the mineral. “Most workers stated that they are not informed about their health conditions and do not know if they have been exposed to radiation or not. Some workers said they consulted a private doctor to get a second opinion,” say researchers at Earthlife Namibia and the Labour Resource and Research Institute who collaborated in a study.

“The older workers all said they know miners dying of cancers and other illnesses. Many of these are now retired and many have already died of cancers,” says the study report.

Cancer is not beyond us in terms of cancer control and reducing the impact of the disease, declared the Cancer Association of South Africa (CANSA) on World Cancer Day this year.

“The global cancer epidemic is huge and set to rise,” said Elize Jourbert, head of CANSA. “In South Africa, more than 100 000 are diagnosed annually. This day helps us spread the word and raise the profile of cancer”.

Under the tagline ‘Not beyond us’, World Cancer Day in South Africa focused on taking a positive and proactive approach to the fight against cancer, highlighting that solutions do exist regarding cancer care and early detection and that they are within reach.

Meanwhile, Ellen Awuah-Darko, the 75-year-old founder of the Accra-based Jead Foundation for breast cancer, says it was her personal experience of finding a breast lump and ending up paying tens of thousands of dollars to be treated in the United States that made her start to push for change.

“In America I had to put down 70,000 dollars before they’d even talk to me,” she said in an interview with Reuters. “I was lucky, I could afford it after my husband died and left me money, but I thought ‘why should I get treatment when others can’t’.”

Now, every Wednesday, Awuah-Darko goes with healthcare workers into communities in the Eastern Region of Ghana to offer women a simple breast examination and show them how to check themselves.

“Early detection can save your life,” she said. “I want everybody to know that. It’s not something people should be ashamed of or embarrassed about.”