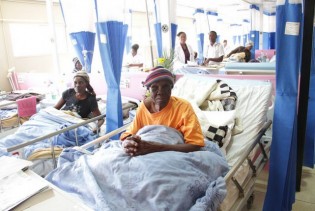 Learning from the Tuberculosis Pandemic

By Morounfolu Olugbosi
As countries around the world—from Kenya to Canada, South Africa to Sweden—relish the prospect of an unofficial transition of COVID-19 from pandemic to endemic and start to ease pandemic-related restrictions, many of us in the tuberculosis (TB) community find it hard to relate. In TB, we know what can happen when a pandemic becomes an accepted fact.

By Katelyn Fossett
Patients, doctors and international aid groups are calling on donors and governments to support measures that would make treatment of drug-resistant tuberculosis more effective and accessible.

By Carey L. Biron
The U.S. Food and Drug Administration (FDA), the sector’s primary regulator, has given accelerated approval to a controversial new drug for use by patients suffering from forms of tuberculosis that have proven resistant to other medicines.

By Sarah McHaney
The next several years could see either the elimination of tuberculosis in some regions or millions of otherwise preventable deaths, according to new research released in Washington Wednesday by the World health Organisation (WHO).
ADVERTISEMENT ADVERTISEMENT