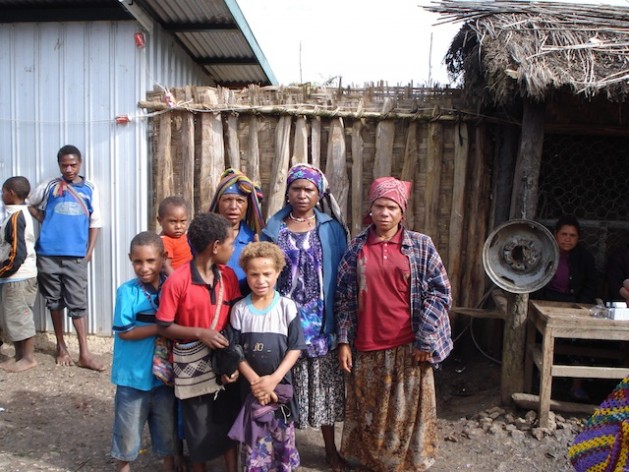 In Papua New Guinea, most people live in rural areas with poor access to health services, increasing the challenges of fighting infectious diseases, such as tuberculosis. Credit: Catherine Wilson/IPS

While efforts to combat the disease worldwide have produced results, with the global death rate dropping by 45 percent since 1990, the annual number of new cases in Papua New Guinea has risen from 16,000 to 30,000 over the past five years.

“The biggest barrier for the moment is cultural beliefs about the causes of diseases [...]. The first source of help [for many patients] is witchdoctors and local remedies." -- Louis Samiak, chairman of public health at the School of Medicine and Health Services at the University of Papua New Guinea
On World Tuberculosis (TB) Day, observed on Mar. 24, the country’s health experts spoke out about the challenges they face in tackling a disease that thrives in communities struggling against hardship and inadequate access to information and basic services.

“The biggest barrier for the moment is cultural beliefs about the causes of diseases. TB is a disease with long incubation and the first source of help [for many patients] is witchdoctors and local remedies. When patients present late [at health facilities] with advanced disease, it is difficult to treat,” Louis Samiak, chairman of public health at the School of Medicine and Health Services at the University of Papua New Guinea, told IPS.

Disease symptoms include fever, chest pains, fatigue, weight loss and cough, frequently with sputum and blood, which results in the airborne spread of bacteria.

The illness transmits quickly in overcrowded impoverished settlements and in Papua New Guinea, where sanitation coverage is only 19 percent and less than half the population have access to clean water, it is the leading cause of hospital deaths.

In rural villages of Kikori District in the southern Gulf Province the TB incidence rate is an alarming 1,290 per 100,000 people, according to the Papua New Guinea Institute of Medical Research. The national prevalence is 541 cases per 100,000 people, compared to the global average of 126.

The campaign to halt the epidemic in Gulf Province is supported by the international medical non-governmental organisation Doctors Without Borders (MSF). Operating from the main town of Kerema, MSF has since last year diagnosed an average of 50 new TB cases every month, inlcuding patients as young as 10 months.

Adults aged 15-54 years are mainly afflicted, but youth account for about 28 percent of cases in PNG, while pulmonary TB and TB meningitis contribute to malnutrition and mortality in children.

One mother took her ill six-year-old child to Kerema General Hospital in an arduous journey from her mountain village, which took three hours by boat and two by truck.

“In the beginning, the mother did not understand what TB is, why the child needs treatment every day for long periods and why she has to be away from her village. It took two months to gain her acceptance of the treatment and for her to prepare for living away from the village,” a spokesperson for MSF in Papua New Guinea recounted to IPS.

“But the child is now receiving treatment every day with signs of improvement.”

Threatening disease control efforts is increasing resistance in patients to the strong first-line drugs, isoniazid and rifampicin. Common practice of patients stopping medication as soon as they feel better and not fully completing treatment is the main cause of multi-drug resistant TB in the country, Suparat Phuanukoonnon of the Institute of Medical Research told IPS.

When treatment is interrupted, the lower level of medication consumed fails to eradicate all the bacteria, which then develop resistance in the patient’s body.

In 2013, 4.5 percent of diagnosed TB cases in the country were multi-drug resistant, a significant increase from 1.9 percent in 2010. Drug resistant TB is rising in the rural Western and Gulf Provinces and the capital, Port Moresby, where more than half the population live in squatter settlements.

The impact on development is acute, with 75 percent of people with TB worldwide of working age.

“TB can affect all or any part of the human body. It, therefore, affects the whole person and reduces their ability to be productive to society or their community,” University of Papua New Guinea’s Samiak said.

While sufferers face rising healthcare expenses, the inability to work reduces their incomes. Poverty is perpetuated in the next generation when the disease affects both parents, forcing children to withdraw from school in order to care and provide for the family.

Papua New Guinea is the most populous Pacific Island nation with a population of seven million. But there are immense logistical challenges to fighting infectious diseases in the country, with more than 85 percent living in rural areas with poor, if any, access to roads and readily available transport to urban centres and health facilities.

A further hindrance is insufficient healthcare professionals with less than one doctor and 5.3 nurses per 10,000 people and a decline in the country’s health services since 2002, according to a report last year by the National Research Institute.

It found the availability of basic drugs in health clinics has fallen by 10 percent and visits from doctors dropped by 42 percent in the past decade. Despite rapid population growth, the number of patients seeking medical help per day has decreased by 19 percent.

Resources also need to be directed toward public education following a medical research institute survey of 1,034 people in the Central, Madang and Eastern Highlands Provinces, which showed the majority to be unaware of TB, its causes, and treatment.

Phuanukoonnon explained, “Prior to the Global Fund grant for TB [eradication] in PNG in 2007, it was a neglected disease in terms of political commitment and proper funding for the control programme.”

Limited health services are stretched as it is and, while TB information is available at health centres, overworked staff members still have little time for advocacy.

Any educational approach should address “how people receive and process information and believe the information enough to take action”, which requires that “health communication should be relevant to local contexts,” she continued.

Resources to assail the epidemic have been boosted, with the Global Fund announcing last month a further 18 million dollars of funding to fight TB in Papua New Guinea over the next three years.

Samiak said that financial resources could be well spent developing in-country laboratory facilities and staff training, so that TB test results are processed more efficiently and patient follow up and treatment expedited.