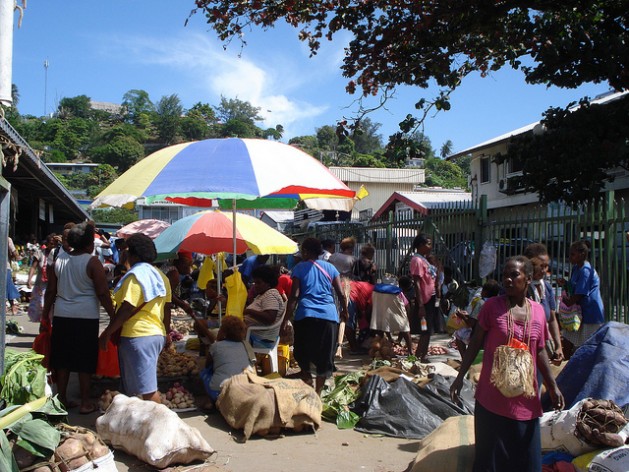 SYDNEY, Feb 11 2015 (IPS) - The rapid rise of non-communicable diseases (NCDs) in the Pacific Islands, which now cause 75 percent of all deaths, is one of the greatest impediments to post-2015 development, health ministers in the region claim.

The Western Pacific has the world’s highest regional prevalence of diabetes, an NCD disease that is exacerbated by unhealthy eating habits, obesity and sedentary lifestyles, according to the International Diabetes Foundation. National prevalence rates have reached 25 percent in the Cook Islands, 29 percent in Tokelau and 37 percent in the Marshall Islands.

“Many amputations are done in our Pacific hospitals each day and people are losing their vision constantly due to diabetes." -- Spokesperson for Fiji-based Pacific Disability Forum (PDF)
Experts are increasingly concerned about the impact of the disease on the rate of disability, particularly the amputation of limbs and visual impairment, which threatens to undermine efforts to reduce poverty and inequality.

In Papua New Guinea, a southwest Pacific Island state that is home to over seven million people, “diabetes is increasing its prevalence in the general population, including children 12 years and younger, and the amputation of limbs is known among adults as young as 23 years,” Gerard Saleu, senior nursing officer at the country’s Institute of Medical Research, told IPS.

“Diabetes is certainly having an impact on disability in the region where not everyone can afford wheelchairs or walking and visual aids,” he added.

There has been a marked rise in NCDs in the Pacific Islands since at least the 1970s, experts say.

Considerable blame has been placed on the lure of globalised consumer-based lifestyles in a region with a long history of subsistence living, and the increasing influx of imported processed foods, high in fat and sugar content.

Local diets originally based on fresh fish, vegetables and fruit now include a high intake of instant noodles, packaged biscuits and carbonated drinks. Less than 10 percent of adults in Kiribati, Nauru, Marshall Islands, Papua New Guinea and the Solomon Islands eat a sufficiently nutritious diet, while more than 60 percent are obese in American Samoa, Tokelau, Cook Islands and Tonga, according to the Secretariat of the Pacific Community (SPC).

The onset of diabetes, when the pancreas fails to produce enough insulin to regulate blood sugar levels, can lead to blood circulatory problems and damage to the nerves, heart, eyes and kidneys. This heightens the risk of blindness, stroke and amputation of limbs, commonly feet and lower legs.

Globally, NCDs, including diabetes, account for about 66.5 percent of all years lived with disability.

“Many amputations are done in our Pacific hospitals each day and people are losing their vision constantly due to diabetes,” a spokesperson for the Fiji-based Pacific Disability Forum (PDF) told IPS.

Meanwhile the main hospital in the South Pacific Island state of Tonga, home to some 103,000 people, witnessed a 400-percent increase in these amputations over the past decade.

The subsequent loss of mobility, decline in economic participation and increase in household medical expenses is entrenching hardship and inequality, especially for those families that are already economically disadvantaged.

For many islanders with disabilities, “most public buildings are not accessible, employers do not have reasonable accommodation in the workplace and many are unable to work, which is a lost income for the family,” said the spokesperson for the PDF.

While awareness of and political will to address the needs of disabled people, who comprise about 17 percent of the Pacific Islands population, is growing, they continue to be “among the poorest and most marginalised members of their communities…with limited access to education, employment and basic social services, which leads to social and economic exclusion and perpetuates poverty,” according to the United Nations Development Programme (UNDP).

In Fiji, for instance, an estimated 89 percent of people with disabilities are unemployed.

There is also an absence of rehabilitation services to assist those with diabetes-related impairment to cope with new physical and psychological challenges in their daily lives, the PDF reports.

The devastating toll that NCDs are inflicting on the lives of Pacific Islanders, in turn denying them better human development outcomes, is matched by the unaffordable economic burden on public health services.

The cost of dialysis for diabetes-related kidney failure in Samoa was 38,686 dollars per patient per year in 2010-11, with the total cost to government equal to more than twelve times the nation’s gross national income, reports the World Bank.

With Pacific Island governments currently funding up to 90 percent of national health services, there is little, if any, capability for them to increase health expenditure to address an NCD epidemic.

Pacific health ministers are driving a focus on prevention and calling for a scale-up of actions and investment in prevention and control strategies with a ‘whole-of-government and whole-of-society’ approach.

That means scrutinizing food industry practices in the interests of better public health. Samoa, Nauru and the Cook Islands have now introduced taxes on food and drinks with high sugar content and eleven countries in the region have developed plans to reduce salt levels in foods.

Non-governmental organisations, such as the Pacific Network on Globalisation, have also expressed concern about the impact of international trade agreements, which, in the aim of liberalising trade, can increase the influx of cheap, imported, but unhealthy foods and beverages and disadvantage local food producers.

But lifestyle interventions are also needed to change consumer and exercise habits among people of all ages, including children.

Saleu, the nursing officer for Papua New Guinea’s Institute of Medical Research, said that in PNG, some awareness about NCDs and education for prevention is being done among the general population, but in line with the view of regional health authorities, current resources and preventive efforts still fall short of matching the scale of the crisis.