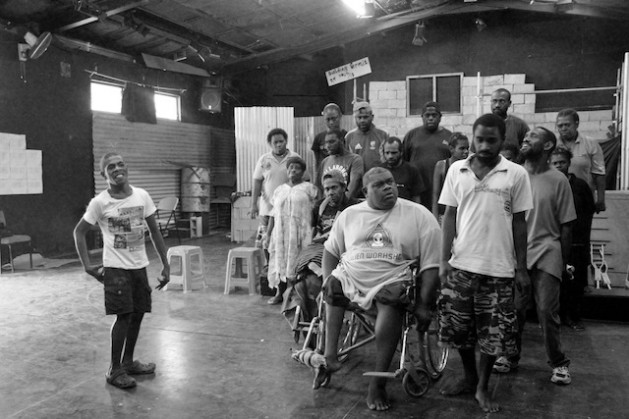 The Rainbow Disability Theatre Group performs its play ‘The Child from Seaview’ at the Wan Smolbag Theatre in Vanuatu. Credit: Wan Smolbag

PORT VILA, Jun 16 2014 (IPS) - In the Pacific Island state of Vanuatu, 23 actors with disabilities, from youth to senior citizens, who have battled physical and social barriers all their lives, are now empowering themselves and others through socially engaged theatre.

Plays inspired by their personal experiences are impacting audiences in schools, urban communities and rural villages across this nation of 82 islands, home to more than 247,000 people, located west of Fiji.

“I am blind and the first time I [started] acting I was very frightened, but every day I went to the theatre I gained confidence and now I can do anything in front of a crowd,” Alista Douglas, a young woman and member of the Rainbow Disability Theatre Group, told IPS in the capital, Port Vila.

“At first, when we got off the bus or the truck, people just watched us like they had never seen people with disabilities...But after we did the play, they didn’t see our disabilities anymore." -- Sergio Moses, a member of the Rainbow Disability Theatre Group
Since 2010, when actor Willie Sablan founded the group, it has produced plays and radio dramas about the challenges, dreams and successes of those living with disabilities.

“It was my dream to be an actor,” Sablan reminisced. “I was the only disabled person in my local youth drama club when I spoke to local scriptwriter Jo Dorras about my vision to start a theatre group for disabled people.”

At the converted warehouses in Port Vila, where the theatre is based, members of the Rainbow Group spoke of their recent play, ‘Ae Blong Hem I Blaen Nomo’ (He is Blind). The production, which is performed in the local Bislama language, recounts the life of a blind man – from the prejudices he faced at school and in his village to his adult years when he was brought back from the brink of suicide by the realisation that he could lead a full and meaningful life.

The play has had 50-60 performances in communities on the main island of Efate, where Port Vila is situated. Last year, the group took the production to rural areas and toured 30 villages on the island of Tanna, part of Vanuatu’s southernmost Tafea Province.

“At first, when we got off the bus or the truck, people just watched us like they had never seen people with disabilities,” youth actor Sergio Moses recounted. “But after we did the play, they didn’t see our disabilities anymore. They came and shook our hands and congratulated us on the play. They were amazed.”

Ellison Bovu, executive director of the Vanuatu Society for Disabled People (VSDP), which advocates for social integration, told IPS that one of the obstacles they were addressing was that many people in the community, including families and educational institutions, do not believe that disabled people have the ability to achieve much in life or perform well in school.

Challenging social perceptions is one of the Rainbow Theatre Group’s key aims and every performance is accompanied by a workshop with the audience, which encourages a two-way dialogue for the audience to learn more about disability rights.

“We have each actor talk about one of their achievements in life, such as running or wheelchair tennis, and we also go into schools, encourage discussion and answer children’s questions,” explained Francis Rurunavira, the group’s coordinator.

An estimated 17 percent of Pacific Islanders and 12 percent of people in Vanuatu have some form of disability. According to Sam Kaiapam, disability rights officer at the ministry of justice and community services, more accurate statistics will be available by the end of July when a report of the first disability survey in the country is completed.

The survey is part of the Vanuatu Government’s commitment to the recognition and rights of disabled people in all areas of life.

The year after ratifying the United Nations Convention on the Rights of Persons with Disabilities in 2008, Vanuatu established a National Disability Policy and Action Plan, followed by a National Inclusive Education Policy in 2011. A multi-stakeholder National Disability Committee, coordinated through committees set up in the country’s six provinces, has been active since 2012.

The United Nations Children’s Fund (UNICEF) reports that Pacific Island communities tend to be overly protective of children with special needs, and families can view public and school environments as unsafe or containing too many physical barriers to mobility.

For VSDP, which works with the government to implement policies regarding disability, identifying children with special needs at a young age and improving their access to education is vital to tackling the high levels of unemployment and poverty that can impact them in adulthood. Less than 10 percent of children with disabilities in the Asia Pacific region attend school, resulting in a regional unemployment rate for people with physical disabilities of 50 to 90 percent.

The Rainbow Theatre Group is playing a crucial role in bringing more special-needs children into education.

Rachael Tarbo, one of the group’s caregivers, observed that “as a result of the group going out and performing in villages, more children with needs have been identified in rural areas and some have now been registered to go to early education classes.”

Since 2006, VSDP has hosted an early childhood activity programme, which prepares children for kindergarten.

In December last year, the theatre group was one of six organisations and individuals honoured at the Pacific Human Rights Awards organised by the Secretariat of the Pacific Community in Suva, Fiji.

The biennial awards celebrate outstanding initiatives to protect and promote human rights in the Pacific Islands.

For the group’s members, the award signified the important recognition that they “don’t just talk”, but actually make a difference in the lives of people with disabilities.