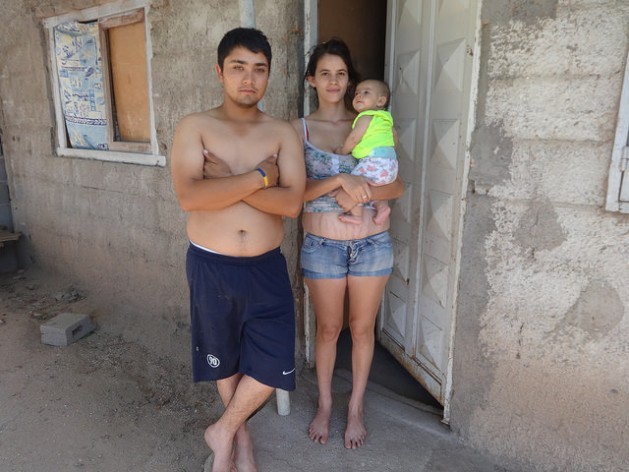 A couple outside their home in a poor neighbourhood in the town of Malvinas Argentinas in the central province of Córdoba. The three members of the family are among the beneficiaries of Argentina’s social programmes. Credit: Fabiana Frayssinet/IPS

BUENOS AIRES, Oct 13 2015 (IPS) - Above and beyond the uncertainty about the direction that Argentina’s economy will take after the Oct. 25 presidential elections, the government’s main social programmes, which have helped bring down poverty levels in the last decade, are definitely here to stay, no matter who is elected.

There are no uniform statistics on the number of beneficiaries, and in some cases there is overlapping information between different government ministries, or individuals or families are included in more than one social programme.

But according to the Catholic University’s Observatory on Argentina’s Social Debt (ODSA), at least 28 percent of urban households – 2.7 million – receive some kind of cash transfer in this South American country of 43 million people.

The programme with the broadest coverage is the Universal Child Allowance (AUH), which reaches 3.6 million families. The monthly stipend per child under 18 goes to parents who are unemployed or work in the informal economy, and is conditional on school attendance and regular medical check-ups.

“The social policies implemented since 2003 without a doubt have contributed significantly to reducing poverty and extreme poverty,” said Gala Díaz Langou with the Centre for the Implementation of Public Policies Promoting Equity and Growth (CIPPEC), a leading Buenos Aires-based think tank.

In particular, the expert told IPS, “since 2009, by means of the AUH, a basic income was guaranteed for many of the families with vulnerable children.”

Another programme, Progresar (To Progress), helps some 557,000 young people between the ages of 18 and 24 return to school or complete their primary, secondary or tertiary education.

The requisites to receive the allowance are that they are unemployed or earn less than three times the minimum wage (in other words, less than 600 dollars a month) working in the formal or the informal sectors of the economy, and that their family is in the same conditions. To qualify, they must regularly present certificates showing that they are still studying.

Argentina Trabaja (Argentina Works), meanwhile, is aimed at creating jobs for highly vulnerable people who are unemployed, lack training and have no other income.

Under the programme, cooperatives are set up to provide training and carry out infrastructure works to the benefit of the community, such as building drains and water mains, community centres and soup kitchens, refurbishing schools and health centres, or repairing roads.

And pregnant women who are unemployed, work in the informal sector, or work as domestics, with incomes below the minimum monthly wage, or who are registered in other social programmes, have the right to cash maternity benefits under the Asignación por Embarazo (Pregnancy Allowance) programme, conditional on regular prenatal visits.

According to the last available figures, in 2011 the plan was providing benefits to 68,580 women.

Programmes like these ones and social pensions “ease extreme poverty, or keep poor families from falling into extreme poverty, especially in a context like the current recession marked by high inflation and limited possibilities of getting a good job for low-skilled workers,” the head of ODSA, Agustín Salvia, told IPS.

“At the same time, these cash transfers have positive effects by increasing consumption among the beneficiaries, which bolsters informal sector activities that provide work for many people,” he said.

But although the programmes have helped keep children and young people in school, Salvia said they have not increased the proportion of students who complete the compulsory 12 years of education, due to factors “that keep school from truly offering technical-professional solutions for poor teenagers.”

He said that because of the small amounts involved in the cash transfers, with the largest possible payment being 92 dollars a month, the programmes do not actually help people leave poverty behind, although they have reduced hunger and mean that the beneficiaries will not “necessarily” reproduce poverty.

“It is an unemployment or informal sector under-employment subsidy,” Salvia said. “As long as decent jobs are not available for low-skilled workers, it makes no sense to eliminate (the social programmes).”

But in his view, “it is possible to improve them, so they can help provide a bridge through training and community social or economic work, to promote a culture of work and cooperatives.”

According to the latest ODSA report, poverty affects 30 percent of the population. But it states that without the government’s social programmes, extreme poverty in Argentina would be nearly double the current rate, affecting four million people, and the poverty rate would be three percent higher.

“There is still a big challenge lying ahead of us,” said Díaz Langou. “Although poverty has been reduced in the last few years, it more disproportionately affects children, and this is true independent of the source used to measure it,” he added, arguing in favour of expanding coverage of measures like the universal child allowance.

“The main way to leave poverty behind is through jobs, education and training,” economist Marcos Hilding of the Fundación Libertad y Progreso (Freedom and Progress Foundation), a market-oriented think tank with ties to the opposition to the centre-left government of President Cristina Fernandez, told IPS.

Hilding complained about the lack of reliable statistics and evaluations, as well as the “overlapping of social plans” run by at least five ministries. He also alleged that they were used for “political gain.”

According to his count, there are 60 social programmes. He argued that the number should be reduced to four or five, and that there should be a time limit on the programmes, which should be monitored through one single database of beneficiaries, with improved conditionalities and incentives to find jobs in the formal sector of the economy.

Based on budget data, a study by his foundation indicates that 18.2 million cash transfers will be made this year, at a cost of 16.7 billion dollars.

As the elections loom, it is looking more and more likely that the next government, to take office Dec. 10, will have to implement structural adjustment plans and open up the tightly controlled exchange market.

But no one doubts that the social programmes will remain in place, although perhaps with some modifications.

The front-runner in the polls, Daniel Scioli of the Front for Victory, the centre-left governing faction of the ruling Justicialista (Peronist) Party, has said he will work to increasingly replace the programmes “with real jobs.”

And the third candidate in the polls, Sergio Massa of the Frente Renovador , announced that if he were elected he would modify the programmes to continue benefits for those who had formal sector jobs and remove them from people who weren’t working or receiving training.

“The three candidates with the greatest chance of being elected president have expressed their intention to keep the AUH (universal child allowance) in place. That reflects the broad consensus on the need for this cash transfer,” said Díaz Langou.

She acknowledged that “there could be a clear political benefit behind” that consensus. But in her view, it also shows “the significance of the AUH for the most vulnerable households and the impact that its removal would have.”

“Above and beyond what the candidates might say to avoid being rejected by the beneficiaries of these programmes, from the point of view of socioeconomic policy it’s impossible to remove them in the short to medium term without a high social and political cost,” Salvia said.

“The labour market is not in a position to absorb all of these people, and the social problems would become extremely serious without these cash transfers. They should remain in place for a long time, even if people find stable jobs,” he added.

“I think the AUH is here to stay, that it could be adapted and improved, but that it would be very difficult to eliminate it,” said Hilding. “The goal would be for less and less people to need it, to reduce the number of beneficiaries.”

But, he said, “next year will be a very complicated one in financial terms, and with a likely devaluation (of the local currency), so it will be important to see if they are adjusted for inflation or not.”