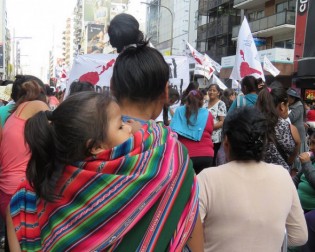 By Fabiana Frayssinet
Argentina’s new conservative government has already laid off 20,000 public employees since early December. Analysts have described the phenomenon as a “purge” of “militants” who supported the last administration, facilitated by the precarious employment conditions in the public sector, despite the steps taken to provide greater job stability over the last decade.

By Jeffrey Moyo
For many young Zimbabweans like 19-year-old Shelton Mbariro, running an unlicensed, backyard handmade shoe business has become a way to escape unemployment in this southern African nation.

By Fabiana Frayssinet
At the age of 22, Franco finally landed his first job, although he is not on any payroll and receives no labour benefits. He is part of Argentina’s informal economy, where one out of three workers are employed – a proportion the government aims to reduce by means of a new law.

By Jeffrey Moyo
Tracy Chikwari, a 36-year-old single mother of two and informal furniture dealer in Harare, Zimbabwe’s capital, is all smiles as she talks about her flourishing business.

By Marcela Valente
Behind “yerba mate”, a caffeinated herbal brew that is popular in Argentina and neighbouring countries, lies a shameful reality: the dismal labour and living conditions of the workers who harvest the leaves of the bush used to make the infusion.
ADVERTISEMENT ADVERTISEMENT