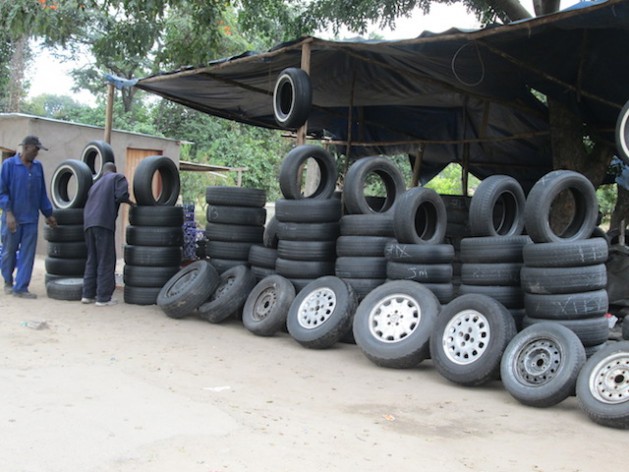 An informal, used tyre shop at a residence in Harare's Hatfield suburb. Zimbabwe has 2.8 million micro, small and medium businesses — 85 percent of which are unregistered. Credit: Tatenda Dewa/IPS

“Formalisation of the informal sector would significantly improve revenue inflows through taxation on employees’ salaries, import duty, property fees and other forms of taxes on the sector. However, there is need to create incentives for the informal sector to register,” Eric Bloch, a Bulawayo-based economist, told IPS.

Many businesses would be reluctant to pay taxes because of concerns that “taxes collected will not be used in the national interest”.

A 2013 FinScope survey, which is now being used by government officials as reference, indicates that 2.8 million micro, small and medium businesses — 85 percent of which are unregistered — have created 5.7 million informal jobs. These businesses generate an estimated turnover of 7.4 billion dollars, according to the survey.

Finance and Economic Development Minister Patrick Chinamasa has already cast a light on the growth of the informal sector and its significance to the economy in this southern African nation.

Responding to questions in parliament in February, Chinamasa said: “Our economy is now informal…That is the reality of our economy and it is a reality we must recognise and take measures on how to tap into this sector.”

Godfrey Kanyenze, an economist and director of the Labour and Economic Development Research Institute of Zimbabwe, a think tank of the Zimbabwe Congress of Trade Unions, explained that the government was failing to fund public programmes because the treasury struggled to mobilise money from existing industry and labour.

He said the government was also losing out because the Zimbabwe Revenue Authority (ZIMRA) was struggling to tax registered small to medium enterprises.

The formal sector has been negatively affected for more than a decade by the withdrawal of investment, low investor confidence, rampant power outages and a struggling economy that was marked by hyperinflation and acute shortages.

Kanyenze said that to ensure effective monitoring, the government must organise the informal sector into clusters based on the services or products they supplied or produced. He said the government should also offer business development and training services to the sector and devise mechanisms to protect and promote them.

Economist John Robertson told IPS that formalisation of unregistered enterprises would bring a host of other advantages.

“Besides improving revenue collection and encouraging better public sector performance, formalisation of the informal sector would hopefully ensure better working conditions for the millions said to be employed there. They would enjoy benefits associated with the formal sector such as medical aid schemes, pension, better work safety and the ability to negotiate salaries,” he said.

Tapson Mandiziva, who works as an assistant carpenter at an unregistered furniture-making firm in Glenview, a low income suburb in Harare, does not enjoy such benefits.

“I don’t have an employment contract and my boss pays me as and when he likes. Sometimes he makes huge profits from the sale of wardrobes and the kitchen furniture that we manufacture but uses the money to buy cars and personal items and does not pay us. When he does, the money is too little and he has dismissed workers on flimsy grounds,” Mandiziva, 31, told IPS.

In the three years he has worked for the furniture firm, the highest salary he has received is 200 dollars a month. But Mandiziva says he can go for as long as four months without receiving a wage and does not receive backdated payments.

The police and municipal authorities periodically raid backyard industries like the one Mandiziva works for. They have been accused of confiscating products or extorting bribes from companies operating without licences. There are also allegations that they sell the seized goods at office auctions where the officers or local authority officials are the only buyers.

Innocent Makwiramiti, an economist and former chief executive officer of the Zimbabwe National Chamber of Commerce, told IPS that the illegal raids could be avoided if the informal sector was regularised.

“The police officers, municipal and ZIMRA officials are collecting thousands of dollars in bribes from the informal traders and, in some cases,  are forcing traders to surrender part of their earnings as a protection fee against the raids.

“Part of this money could be going to the treasury had the informal sector been registered and compelled to observe company and taxation regulations,” he said.

However, formalisation and taxation of the informal sector will not be easy, according to experts.

“The biggest constraint is reluctance by small businesses to register. They tend to suspect that formalisation would open them to too much scrutiny that would affect their income generation. Since most of them are run by individuals and families that view adhering to labour laws as a burden, they would rather remain as they are,” said Bloch.

The February edition of the Public Administration and Development Journal shows that there are numerous hurdles the government faces in its attempts to harness taxes from the informal sector and registered SMEs. This includes the manpower and administrative constraints of ZIMRA.

According to the report, many businesses would be reluctant to pay taxes because of concerns that “taxes collected will not be used in the national interest”.

Many are also disgruntled over poor service delivery and the fact that some politically-connected businesspeople were being let off the hook for failing to pay tax.

Augustine Tawanda, the secretary general of the Zimbabwe Crossborder Traders Association, which comprises informal entrepreneurs whose businesses involve sourcing for resale or selling goods in neighbouring countries, told IPS: “There is plenty of money circulating in the informal sector and it is possible to innovate a win-win situation with the government.”

However, his organisation is opposed to registration of informal businesses, preferring that the government just includes them in its data base only for purposes of taxation rather than formalisation.

“The main problem is that the government is only concerned about taxing us, rather than making us grow as businesses. It does not have clear policies for formalisation and has not shown how it is going to incentivise informal traders,” he said.