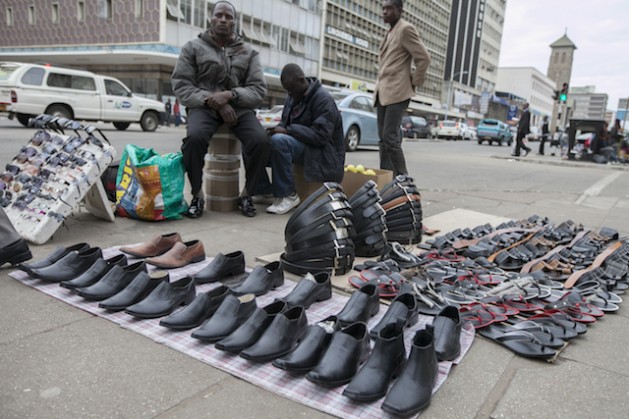 Makers of handmade shoes sit on the pavement in Harare, Zimbabwe’s capital. There are almost 200,000 youth involved in unlicensed, backyard handmade shoe businesses across the country. Credit: Jeffrey Moyo/IPS

HARARE, Jul 3 2014 (IPS) - For many young Zimbabweans like 19-year-old Shelton Mbariro, running an unlicensed, backyard handmade shoe business has become a way to escape unemployment in this southern African nation.

“We craft the shoes using raw hides that we get from abattoirs and cattle farms in and outside Harare, making strong and long-lasting shoes,” Mbariro tells IPS.

According to statistics from the Harare United Cobblers Association, an organisation of young shoemakers, Mbariro is one of 196,423 young people aged between 19 and 24 who have set up shop on street corners across towns and cities in Zimbabwe, offering a range of handmade shoes.

Handmade shoes for either men or women can cost anything from 25 to 40 dollars, with sandals costing about 10 dollars. According to shoemakers interviewed in Harare, these prices fluctuate, often falling during the day. However, the prices are linked to demand and increase during peak hours and at month end.

Despite the increased availability of cheap, Chinese-made shoes, these handmade shoes are popular because of their long lifespan, attractive designs and negotiable prices. They could also be popular because soon after Zimbabwe’s July 2013 elections, the country’s sole shoe manufacturing company, Bata, scaled down operations citing the country’s poor economic performance.

But Mbariro and even 21-year-old Shadrack Bvumb, another shoemaker from Harare, attract large numbers of customers.

“When business is good, mostly during month end, I pocket at least 100 dollars from my daily sales,” Mbariro says.

Making shoes by hand has become the way of life for youth here in a country where the economy continues to shrink amid perpetual closures of industries.

“This is the way we now survive as you see us here selling these handmade shoes. We make them on our own and come here to sell them because it’s a waste of time to keep searching for unavailable jobs,” Bvumbi, who comes from Mabvuku, a high-density suburb in the Zimbabwean capital, tells IPS.

But local authorities say they hardly benefit from these young people, whom they accuse of evading tax and flouting council bylaws.

“As council, we get nothing from these shoemakers because they operate at undesignated points often evading council cops,” Harare City Council spokesperson Lesley Gwindi tells IPS.

Most street venders here have, at some time or another, engaged in running battles with council cops for selling their handmade shoes without licences.

It costs about 20 dollars to apply for a vendor’s licence in the city. If approved, the licence costs 120 dollars and is valid for a year.

But the young entrepreneurs say they cannot pay local authorities and get nothing in return.

“We make money on the streets where there are no designated points for us to do business. Council authorities here have no facilities for us,” Mbariro says.

Edmund Chiutsi, who heads the Harare United Cobblers Association, tells IPS: “There are no proper points for us in towns here to sell the shoes we make; there are no shelters and what should we pay councils for?” Instead, the association lobbies local and government authorities to recognise informal shoemakers’ strides in stimulating the economy and to allow them to safely operate in cities and towns.

“Increasing retrenchments in workplaces and the increase of jobless young people fuels the rise of local innovators as people strive to fight against the tide of economic challenges here,” economist Daniel Mbewe tells IPS.

But only two percent of young footwear makers benefitted from this, according to the Harare United Cobblers Association. And those who benefitted allegedly had links to ruling party politicians.

“We rather prefer to fight on our own and keep going,” Bvumbi says.