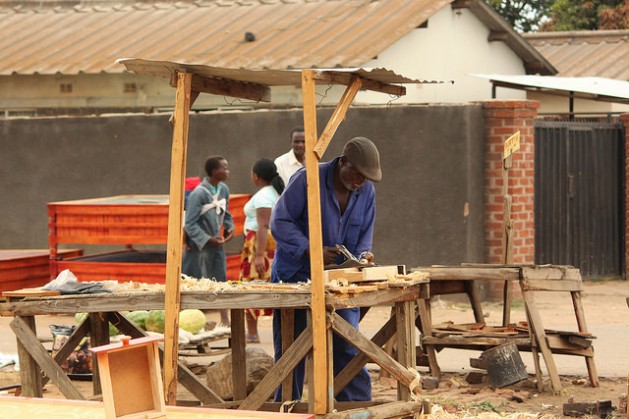 There has been a boom in Zimbabwe’s informal carpentry sector. An unidentified carpenter is pictured at work in Glenview, a high-density suburb in Zimbabwe’s capital, Harare. Credit: Jeffrey Moyo/IPS

HARARE, Apr 21 2014 (IPS) - Tracy Chikwari, a 36-year-old single mother of two and informal furniture dealer in Harare, Zimbabwe’s capital, is all smiles as she talks about her flourishing business.

“I bought two houses here in Harare by trading in furniture that I buy from the informal market and I have no doubt this feat is taking me to greater heights,” Chikwari tells IPS.

“Yes, informal businesses like carpentry are doing very well considering the ready market for their products. But the government is not earning revenue from them.” -- Independent economist Kingston Nyakurukwa

Informal carpentry is becoming a fast-growing industry in this southern African nation.

Fainos Dziva, a carpenter in Zimbabwe’s Chitungwiza town, 25 kilometres southeast of Harare, manufactures furniture that he says caters for all people — the rich, the poor and the middle class.

“Many people, including business people, owing to the exorbitant prices of furniture in department stores here, prefer to come here where prices are negotiable,” he tells IPS.

In places like Harare’s high-density suburbs of Glenview, Machipisa, Budiriro and Kuwadzana, busy carpenters make and sell furniture to individuals and big businesses.

According to the Informal Woodworkers’ Association, a Harare-based organisation, 18,500 people are currently engaged in informal carpentry in the capital.

“Most carpenters here shun practicing formally, evading operational costs from local and government authorities for the land and resources they use, resulting in close to 20,000 people turning to informal carpentry. Indeed it is a sharp rise from about 7,000 back in 2009,” the association’s chairperson, Dickson Mapuranga, tells IPS.

He explains that the association guides carpenters on how to grow their business and links them to ready markets for their products.

The informal sector is absorbing jobless Zimbabweans. Here, 60 percent of this country’s 13 million people are unemployed, according to figures from the United Nations World Food Programme.

And a number of industries here have closed down over the years. According to the 2013 National Social Security Authority Harare Regional Employer Closures and Registrations Report, 711 companies closed shop between July 2011 and July 2013.

Many people who had previously been formally employed, some 3.7 million, are now working in the informal sector, according to the Poverty Income Consumption and Expenditure Survey, which was released by the Zimbabwe National Statistics Agency in January.

The formal carpentry industry has been declining steadily as well. According to statistics by the Ministry of Small to Medium Enterprises, 13,400 people are said to be currently working in the formal carpentry sector countrywide. This is a fall from the 22,132 who worked in the same sector three years ago.

Carpenters like 39-year-old Ignatius Mhara from Chitungwiza town have turned their homes into mini furniture factories, sometimes earning thousands of dollars each month.

“Every day I have new furniture orders from my customers, which keeps me busy. Often I take home 400 to 600 dollars from daily sales as most of my customers can’t afford to make once-off payments for the furniture they purchase from me,” Mhara tells IPS.

But more often than not these informal industries are unregistered and unregulated and their owners often evade registration and taxation.

Economists here say these informal businesses have failed the government.

“Yes, informal businesses like carpentry are doing very well considering the ready market for their products. But the government is not earning revenue from them,” independent economist Kingston Nyakurukwa tells IPS.

A top government economist speaking to IPS on the condition of anonymity says the government is losing close to 32 million dollars a month in tax revenue from the informal carpentry sector.

Zimbabwe’s Small and Medium Enterprise Minister Sithembiso Nyoni tells IPS: “About 7.4 billion dollars is circulating in the informal sector; imagine if millions of people in informal sectors were to pay one dollar each per month to government fiscus.”

Zimbabwe’s Finance Minister Patrick Chinamasa announced this year that the government is set to formalise the unofficial job sector through registering and licensing informal businesses and their economic activities.

But for many informal traders like Mhara, it remains to be seen whether or not they will embrace surrendering portions of their profits to the government as tax.

“Paying the government tax for our activities depends on what we also get from them. But we are getting nothing. We are harassed daily by so-called plain clothes officials from the Zimbabwe Revenue Authority, who accuse us of not benefiting the government,” Mhara says.