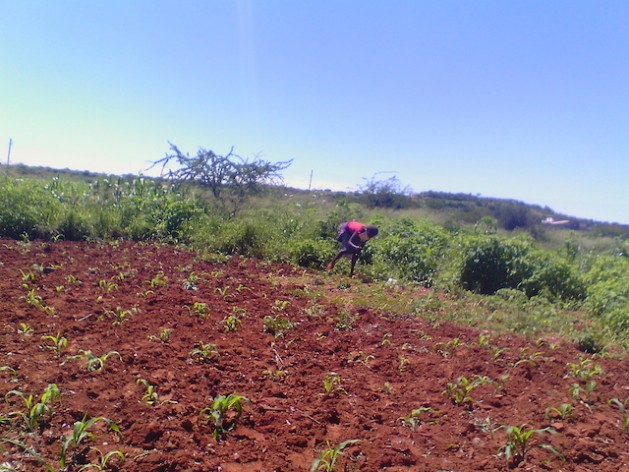 BULAWAYO, Zimbabwe, Apr 10 2014 (IPS) - It is harvest season in Zimbabwe and Janet Zondo is pressed to find space on the piece of land she is farming to erect a makeshift granary. Zando says she could very well build a miniature silo, judging by the size of the maize crop that she is preparing to harvest.

But Zondo is not a communal farmer somewhere deep in the rural areas. She is one of the many residents in Bulawayo’s high-density urban suburbs who have taken to farming vacant plots of land here after last year’s unexpected rains filled rivers, destroyed dams and claimed lives.

In the residential suburbs of Tshabalala, Sizinda and Nkulumane, here in Zimbabwe’s second-largest city, vacant plots of land are flourishing with maize.

"It's a self-regulating mechanism, and for the sake of sustainability, trying to feed yourself must not be illegal." -- Japhet Mlilo, a development researcher

Like many here, Zondo had always dabbled in farming. But her maize crop always failed because of successive poor rains. Last year’s heavy, unexpected rains provided the right conditions for planting.

“I have never harvested this much maize crop,” Zondo, who is from Nkulumane, told IPS.

“I expect to produce more than 100 kilograms of mealie meal [course flour made from maize] from my maize field,” Zondo estimated.

Other residents farming on vacant plots also expect to harvest a bountiful crop this season. But there are no guarantees that Zondo, or any of the other residents who have taken to farming, will be tilling the same piece of land next season.

This is because the land is owned by the local municipality. And Zimbabwe’s bylaws prohibit farming on vacant municipal land.

“We are aware people are farming on undesignated areas but we also must make humanitarian considerations. People need food and we know not everyone can afford mealie meal,” a Bulawayo city councillor, who himself planted maize on a vacant municipal plot, told IPS.

“Most of the land is reserved for residential homes, which means these farming activities are not permanent,” he said.

The Food and Agriculture Organisation of the United Nations (FAO), while acknowledging that urban agriculture is illegal in many countries, estimates that more than 800 million people around the world practice urban agriculture and it has helped cushion them against rising food costs and insecurity.

FAO says the number of hungry people has risen to over one billion, with the “urban poor particularly being vulnerable.”

Under its Urban and Peri-urban Horticulture Growing Greener Cities project, FAO is working with governments in developing countries on “integrating horticulture into urban master development plans,” and this is what residents like Zondo could benefit from.

“We are always in constant fear of our crop being chopped down by the municipality. I am in a rush to harvest before anything like that happens,” Zondo said.

Regina Pritchett, global organiser for land and housing, and community resilience at the U.S.-based Huairou Commission, a global coalition of women in development and policy advocacy, says that while women are at the forefront of sustainable development, they are still bogged down by bureaucracy in accessing land.

“You need local solutions for women and access to land,” Pritchett told IPS.

However, experts note that this lack of formal ownership of small pieces of land could threaten livelihoods and food security in the long term in developing countries.

As increasing numbers of urban residents grow their own food, it could help cushion them against food shortages in Zimbabwe’s cities, says Japhet Mlilo, a development researcher at the University of Zimbabwe.

This southern African nation is already facing a food crisis. Last year it imported 150,000 tonnes of maize from Zambia in what experts say is a sign that local farmers are once again not going to meet demand.

According to the agriculture ministry, the country requires 2.2 million tonnes to meet its annual maize requirements.

“At the end of the day it’s simple arithmetic. Make urban farming totally illegal and people fail to plant their maize, which means [they will] starve. Or you can let them plant their own crop and you help reduce the number of people who need food assistance,” Mlilo told IPS.

“Residents already know which piece of land is theirs even without having titles to it. I am yet to hear residents fighting over land they allocated to themselves without municipality approval. It’s a self-regulating mechanism. For the sake of sustainability, trying to feed yourself must not be illegal,” he explained.

If globally women were given title deeds to land, it will help contribute to the sustainability of farming projects as owning resources provides some “incentive” for  women to continue farming, said Karol Boudreaux, a land expert with the Cloudburst Group, a U.S.-based think tank.

For Zondo, however, the assurance that the her crop will not be destroyed by municipality’s police is enough.

“I have worked hard for this, imagine losing it,” Zondo said.