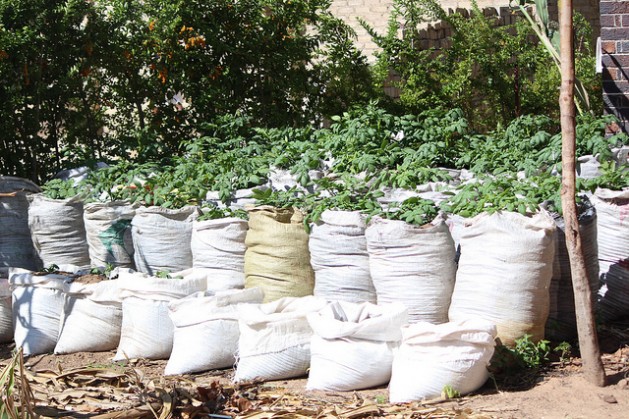 HARARE, Mar 9 2014 (IPS) - Shyline Chipfika, 26, is one of thousands of Zimbabwean women in urban centres who have struck gold by growing potatoes. And a lot of their success has to do with an import ban.

“I used to be a mere housewife, and my life has changed in a big way after I ventured into potato growing,” Chipfika told IPS.

“Who said women can’t provide for their families? Really, watch what the potato magic has done for many women here." -- Grace Mbiza

Chipfika’s husband, faced with joblessness, turned to hawking at a local commuter omnibus terminus in the capital, Harare, after the company he worked for shut down in 2008 owing to the hyperinflation that crippled many sectors of the economy.

Chipfika’s rags-to-riches story is a very rare one in Zimbabwe, and she boldly declares she will not abandon the potato-growing venture anytime soon.

“I used to stay in a small apartment, but thanks to this venture, I have managed to extend my apartment into a respectable piece of property,” she said.

The potatoes do not require large amounts of land, just ordinary backyards, where the women plant seeds in sacks filled with fertile soil.

“The potato growing method on urban yards by women here is very simple yet extremely productive, although since time immemorial, urban yards have often been wasted by many who have not seen any value in them,” agricultural extension officer Mike Hunde, based in Zimbabwe’s Mashonaland East Province in Marondera, 70 kilometres outside Harare, told IPS.

The officers are engaged by the government to facilitate agricultural research that enhances productivity.

The government promotes potatoes for food security, and as a way of backing local producers like Chingama and many others. In 2013, it banned imports of this staple food, and the crop took off.

Taking advantage of the ban, women in Zimbabwe’s towns and cities have since formed associations to get financial aid from pro-women non-governmental organisations to intensify local potato production.

According to the Urban Women Farmers’ Union, a trade union for women potato growers in Harare, there are 151 associations that women in towns and cities have formed to mobilise funding to cater for their potato growing ventures, with 16,150 women involved in potato production.

After securing 1,000 dollars to buy inputs, Chikwari said their project expanded rapidly. Today, the women’s association boasts of sending their children to colleges and universities without financially straining their husbands.

“In 2013 alone, we harvested 30 tonnes and sold each 15-kilogramme packet for eight dollars, raking in thousands of dollars in profits,” Chikwari told IPS, adding that all of them now owned a car and a house in the capital thanks to potato growing.

Women in this Southern African nation make up the majority of jobless. According to the Central Statistical Office, of the country’s 13 million people, 60 percent (7.8 million) are women and 66 percent of them (5.14 million) are unemployed.

Official figures from 2013 indicate that only 850,000 people are formally employed.

The World Food Programme estimates the unemployment rate in Zimbabwe to be around 60 percent, despite the large numbers of people employed in the informal sector.

But for many urban women now undertaking potato farming at home, unemployment has become a thing of the past.

“Women like me no longer worry about employment. I make extensive sales from the potatoes I reap from my backyard,” 44-year-old Lina Chingama from Norton, a town 40 kilometres west of Harare, told IPS.

Chingama said she harvests the potatoes three times in a year and gets 1,200 kilogrammes of potatoes each time. A 10 kilogramme bag of potatoes fetches about 10 dollars at the local market.

This means Chingama pockets 1,200 dollars for the 1,200 kilogrammes she harvests each time.

Traditionally regarded as dependent upon their male counterparts, owing to urban potato farming, many women have even become breadwinners.

“Who said women can’t provide for their families? Really, watch what the potato magic has done for many women here. We are not just sleeping in towns, but rather fending for our families too,” Grace Mbiza, a women’s rights activist, told IPS.

“Their method does not harm the environment, as ordinary sacks with potato plants are placed within urban yards to nurse potatoes as they develop,” Chigumbu told IPS. He said common potato varieties grown here include Amythest, Mont Claire, BPI, Jacaranda, Opal and Emerald.

Ronald Museka, chair of the Potato Council of Zimbabwe, an organisation representing growers, told IPS, “We want to ensure there is enough production for the local market and urban women are just doing that. Soon they may start exporting.”

Zimbabwe’s Agriculture Minister Joseph Made is strongly supportive of these urban women’s ventures.

“Women have championed a grand move, maximising potato yields in their ordinary domestic yards and at the end of the day smiling all the way to the bank. We will not hesitate an inch to support them in every way possible,” Made told IPS.

But women potato growers here may face another hurdle with unpredictable local authorities, as the by-laws on such projects in towns are unclear.

“Yes, women are doing well, but council authorities haven’t approved urban agriculture and I’m unsure about what may or may not befall their potato projects,” a top local authority official speaking on the condition of anonymity, told IPS.