PLUMTREE, Zimbabwe, Nov 14 2011 (IPS) - Collecting the monthly subscriptions for her co-operative has always been a headache for Thelma Nare, 41. This is because Nare lives in Tshitshi, Plumtree in rural Zimbabwe, about 60 kilometres away from the humdrum of the nearest town centre where banks are located. 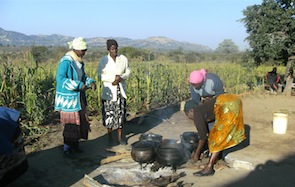 “We meet after a long time as here in the rural areas our homesteads can be very far from each other. So members of our club do not meet or contribute regularly,” Nare said.

In fact, the women in the co-operative do not have a bank account. Until recently, Nare and the other co-operative members had to physically be present to make their monthly contributions.

But now, these “unsophisticated” rural women find themselves at the centre of efforts by mobile phone service providers to introduce mobile phone money transfers in Zimbabwe.

Those without bank accounts, like Nare and her co-operative, can now send and receive cash via their mobile phones.

The system is fairly simple. A user registers for mobile phone banking with their service provider and is given a mobile “e-wallet” – an application on their sim card that is linked to their phone number.

When the user wants to pay for services or transfer money to someone they simply have to go to an agent and pay the desired amount, which is loaded onto the “e-wallet”. The payment is made and the recipient can withdraw the money from an agent. There are various agents affiliated with the mobile service providers across the country, making the service easily accessible to those in rural areas.

It is a convenient system that no longer limits the women’s movements. Nare and the women in her co-operative make regular trips to Bulawayo to sell produce, like Mopani worms. This means that they miss paying their monthly subscriptions.

And as with many co-operatives, or money clubs as they are called here, defaulters are not particularly valued. But these women would have not been able to cope with the country’s failing economy if it had not been for the money club.

For the women in Nare’s money club, belonging to the co-operative is what cushioned them during the tumultuous years of empty shop shelves in Zimbabwe. In the mid-2000s the country experienced hyperinflation and nearly 94 percent of the country was unemployed.

It was on a recent trip to Bulawayo, some 100 kilometres from Tshitshi, that Nare discovered mobile cash transfers.

Mobile network giant Econet Wireless, which has five million subscribers, introduced the service in September and was quickly followed by its competitors, the government-owned NetOne and Telecel.

These service providers have affiliated agents throughout the country, which include the Zimbabwe Post Office, supermarkets and stores where people like Nare can access their funds.

“I was in the city and was told about the use of mobile phones to transfer money. When I told the other women in my money club, it seemed to be the answer to our problems,” she said.

The model is borrowed from Kenya’s pioneering M-Pesa, which has experienced phenomenal growth from 20,000 users at its launch in 2007 to an estimated 14 million this year.

Girlie Moyo, 40, another member of Nare’s money club said that in the past the women had to gather under a tree to make physical contributions. Now, the convenience of the mobile transfers means “we can co-ordinate our contributions without concerns about distance.”

“Sometimes even if you have the money you will have no clue how to get it to the club members because our co-operative does not have a bank account like some in the city,” she said.

While money transfer services sprouted across the country in the aftermath of the mass exodus of Zimbabweans to work across the world, the “bureaux de change” remained in the cities. So those in the rural areas were forced to rely upon undependable and expensive cross-border transporters who demand up to 20 percent of the total amount being sent.

Mobile banking seems to be the best solution for rural Zimbabweans, as a report released on Nov. 9 by the Groupe Speciale Mobile Association (GSMA) found that Africa has the fastest growing mobile phone market in the world and is the world’s second-largest mobile market by connections, after Asia. The GSMA report predicts that there will be more than 735 million subscribers in Africa by the end of 2012.

According to Econet Wireless, by 2015 mobile money transfers in Africa will reach 200 billion dollars.

“These are services which people, especially rural women, have always wanted,” said Viola Matongerere, an economist and gender and development specialist.

“Zimbabwe is one of many developing countries where the efforts of rural women to improve their livelihoods has been thwarted by little things which men have ready access to, like bank accounts for example.

“I think for women, these mobile phone-based services provide opportunities for the realisation of financial autonomy as they can now easily move their money without relying on anyone,” Matongerere said.

Money transfer agents affiliated with the country’s service providers are already reporting huge interest in the initiative as the government of Zimbabwe continues its promotion of paperless banking transactions.

“What has been great so far since the introduction of the service is the amount of cash that is moving to rural areas,” said Stewart Manyora, who works with the Zimbabwe Post Office.

“We have not registered much business of our own lately, yet we can already see that the mobile phone money transfers are making a difference,” Manyora said.

However, service providers are yet to release figures on the amount of money that has been transferred since the introduction of the service.

The United Nations Conference on Trade and Development report titled the Information Economy Report 2011 stated that there remain huge hindrances for women entrepreneurship, and this has been particularly worse for rural-based women.

The report noted that there are an absence of programmes and initiatives that promote the use of ICTs to assist women. Mobile phone banking is being touted by development agencies as a starting point towards empowering rural communities.

“Even when we get money from husbands’ working in Botswana and South Africa, it has been a problem sending this money to our children who are attending school away from the village,” Moyo said.

“The fact that we can organise ourselves as women in our co-operative through our phones is what matters,” she said.