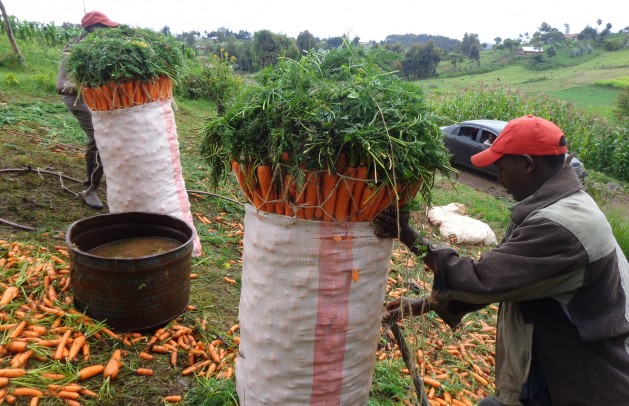 David Kamau on his farm in Nyeri County, Central Kenya. Although he now grows carrots for sale in addition to maize, he says his efforts are yet to pay off. Credit: Miriam Gathigah/IPS

NAIROBI, Dec 17 2014 (IPS) - David Kamau is a small-scale maize farmer in Nyeri, Central Kenya, some 153 kms from the capital Nairobi. He recently diversified into carrot farming but is still not making a profit.

He says that inputs cost too much and if this trend continues he will sub-divide and sell his five hectares.

According to the Ministry of Agriculture, an estimated five million out of about eight million Kenyan households depend directly on agriculture for their livelihoods. Yet agriculture fails to provide an adequate return to farmers because their sector is significantly underfunded, explains Jason Braganza, an economic analyst based in Nairobi.

The percentage of the budget for the agricultural sector is 2.4 percent, down 0.6 percent from the 3 percent in the 2012/2013 budget and well below the threshold of the 2003 African Union Maputo Declaration on Agriculture and Food Security, which mandated that at least 10 percent the national budget should be allocated to agriculture.

The result, says Kamau, is that “farmers are slowly moving out of the farms and trying other economic ventures, Central Kenya used to be a breadbasket but farmlands are being replaced by residential and commercial complexes.”

Farming is not the only sector feeling an economic downslide. Small businesses in Kenya are faced with a lack of essential business support services, especially financial services. Two-thirds of Kenyans do not have access to basic financial services such as banking accounts.

“The growth of both urban and rural slums is an indication that more people are falling on hard times,” according to Dinah Mukami of the Bunge la Mwananchi [People’s Parliament] pro-poor social movement.

She says that the group is planning to hold the government responsible regarding the use of the information in the ‘Socio-Economic Atlas of Kenya’ which the government released last month. The report exposes significant disparities in poverty levels across the country.

“The Atlas is a powerful tool, but whether the government will use the information to change lives and improve living standards remains to be seen,” she says.

Felix Omondi, a resident of Kibera, a division of Nairobi considered the largest slum in Africa, and a member of the Unga Revolution, a local activist group, is one of those who believes that the Atlas is doing some good.

He told IPS that that a programme is under way to upgrade slums and said that this is “one of the ways that the government is using the Atlas to improve the lives of people in the slums.”

In the last three months, the government has been working with residents of the slums to establish income-generating projects and provide basic amenities such as toilets, lighting and drainage.

At least 3,000 youths in Kibera will benefit from these projects. Omondi, a beneficiary, says that he is running one of the posho (corn meal) mills set up by the government to generate income.

Meanwhile, in autumn the news came out that Kenya had seen its economy grow 25 percent after statistical revision and is now officially a “middle-income country”. A few months ago, a similar type of revision brought Nigeria’s economy to the top of African countries in terms of the size of the economy, surpassing South Africa for the first time.

A growing middle class population is an important driver of this growth, but what does that middle class look like? The recently revised Kenyan figures indicate that the Gross National Income (GNI) per capita is 1,160 dollars against the World Bank’s “middle income” threshold of 1,036 dollars.

The latest income-distribution indicators for Kenya (which date back to 2005) show the following:

“They don’t have a kitchen or a bathroom: these are facilities shared with others in the same building lot. His income is pretty much the average salary of a driver, according to the Kenya Economic Survey 2014. Is he middle class?”

According to Braganza, one of the main challenges facing Kenya is that while the country’s economic growth is real and sustainable, the structure of the economy has remained unchanged. Resources have not shifted into the most productive sectors of the economy which would increase overall productivity and an increase in remunerative employment.

Braganza says that for people to feel the trickledown effect of the economic growth, there must also be structural transformation. “There is a need for more investment in the more productive sectors, as well as investment in emerging sectors. This will contribute towards a reduction in unemployment and poverty.”